Australian households hoping for significant cost-of-living “relief” in this budget will be sorely disappointed.

No, this budget won’t make your life cheaper in the short term.

But in the longer term, it’s the best shot we have at bringing rampant price pressures to heel.

Unlike Scott Morrison’s farewell budget, which was loaded with “cost-of-living relief” such as a reduced petrol excise and extended tax breaks for low- and middle-income earners, Treasurer Jim Chalmers’ first effort is a much more sombre affair.

It won’t be hugely popular, but to his credit, Chalmers has had the guts to admit what Morrison could not: that it’s not actually the job of government to assist you with your household budget (unless you’re eligible for welfare).

It’s the job of government to raise taxes in the most efficient way possible to fund the public services – like health and education – that we all demand.

Cheaper drugs will help. But the cheaper childcare and expanded parental leave will take time to kick in. Boosting both the supply of affordable housing and real wages are admirable long-term goals, but provide scant relief now.

But in opting not to rack up bigger deficits as his predecessors did, Chalmers has sensibly chosen to walk lock-step with Reserve Bank Governor Phil Lowe, who is mounting the most aggressive campaign to cool the economy and hence the pace of prices growth we’ve seen in decades.

In the longer term, all households will benefit from this unified effort to curb red-hot inflation. Inflation erodes the real value of everyone’s savings and makes it much harder to negotiate big enough pay rises to ensure you’re not going backwards after rising costs.

But households need to prepare for much more short-term pain before this benefit kicks in.

And make no mistake: that pain is about to get a lot worse before it gets better.

By Christmas, Treasury is tipping annual inflation will be running at 7.75 per cent, fuelled by rising grocery and energy prices. 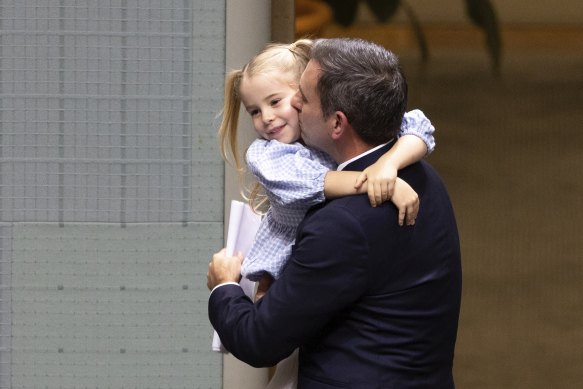 Treasurer Dr Jim Chalmers with his daughter after delivering the budget speech.Credit:Alex Ellinghausen

Help is on its way with initiatives to accelerate the uptake of renewable energy and to modernise the electricity grid, but again that relief is some years off yet.

It is true there is not much the government can do about the three big drivers of rising costs, namely: pandemic-related supply shortages, the Russia-Ukraine war and wild weather events (beyond providing a responsible climate change policy to reduce the risks of the latter).

We must hope that, like the floodwaters, these pressures are nearing a peak. But it pays to prepare for the worst.

The year 2023 will be a difficult one for many, as households confront rising rents, mortgages and prices.

We will all need to tighten our belts, and Treasury expects us to do so. Household consumption is expected to grow 6.5 per cent this financial year before coming to a near standstill of just 1.25 per cent growth in 2023-24.

Treasury is not tipping wages to outstrip inflation until 2024 at the earliest.

So, cut your spending where you can and do try to summon the courage to ask for that pay rise. If there’s one piece of good news in this budget, it’s that our jobless rate is expected to remain at historic lows, in the low 4 per cent range. There hasn’t been a better time in nearly 50 years to negotiate a new salary or switch to a new role or company.

Johnny Depp is out, but the magic is back in Fantastic Beasts series

Martin Lewis shares a guide to mastering your lockdown finances