A cruise ship worker onboard the Royal Caribbean has shared a glimpse of the hidden rooms only staff can access.

Bryan James has been living onboard the world’s biggest crew ship for 223 days and revealed a number of ‘below deck secrets’ in a series of TikTok videos.

‘There’s a secret shop below deck only for crew members where we can buy pretty much anything we need – snacks, toiletries, detergent,’ he said.

‘This is so important because there was a time when crew weren’t allowed off the ship for eight months straight, which is crazy!’ 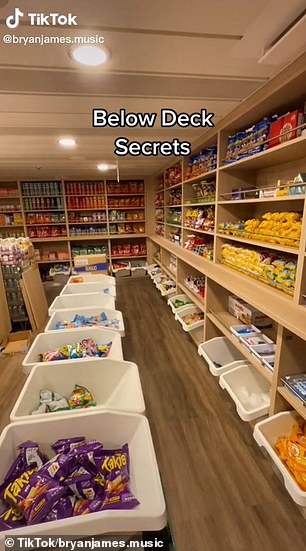 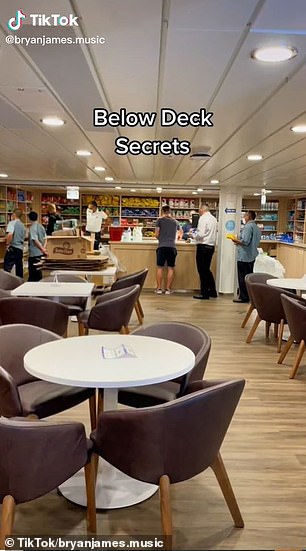 Bryan James has been living onboard the world’s biggest crew ship for 223 days and revealed a number of ‘below deck secrets’ in a series of TikTok videos. ‘There’s a secret shop below deck only for crew members where we can buy pretty much anything we need – snacks, toiletries, detergent,’ he said

Bryan said it feels like ‘Christmas morning’ every time the crew store is restocked.

In the comments he wrote the pricing ‘isn’t too bad’ but the goods are around 30 per cent more expensive than usual due to overseas taxes.

The secret store operates like a supermarket or convenient store.

In a follow-up video, Bryan revealed the one spot where guests can purchase similar items for themselves.

Bryan said he was onboard for more than a six weeks before he realised where the ‘shop’ was.

In the video, he can be seen walking to deck 16 to access a number of vending machines.

‘There’s a bunch of these machines that sell things you need – toothpaste, toothbrushes, sunscreen. Even Pokémon cards!’ Bryan said. 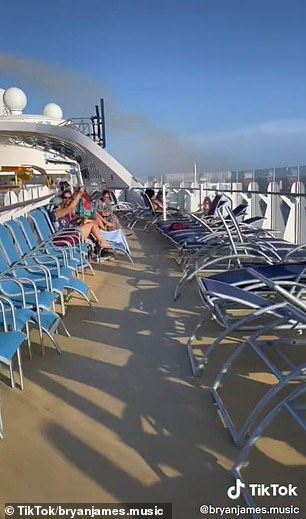 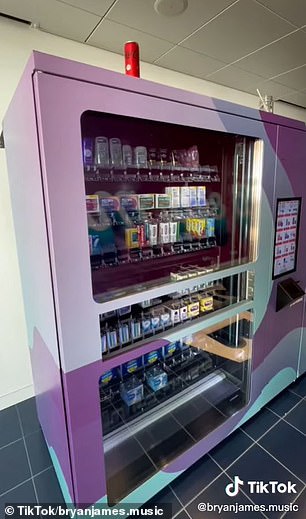 In a follow-up video, Bryan revealed the one spot where guests can purchase similar items. In the video, he can be seen walking to deck 16 to access a number of vending machines

Another cruise ship worker wrote: ‘Omg…we have NOTHING like this on our ship.’

‘Love the vending machine,’ one person wrote, but another said: ‘I wish I had your job!’

Others couldn’t believe Pokémon cards were available for guests to buy from the vending machine.

What else is on a cruise ship?

– The cruise ship pools are filled with sea water

– There are ice skating rinks

– Some ships have robot bartenders

It comes after an Aussie who worked on a cruise ship for 12 months shared the ‘craziest secrets’ she discovered aboard.

Lauren, who’s currently living abroad in the US, shared the lesser-known details in a TikTok video that has since had more than 870,000 views.

While cruise ships are known to have a variety of luxury entertainment venues, pools, restaurants, theatres, casinos and bars, the two facts she most recently revealed have been described as ‘disturbing’ by fans.

‘There’s some crazy stuff about cruise ships that you might not know [about] as a guest,’ she said, adding: ‘It’s kind of creepy – so there’s a morgue on board, there’s a jail on board.’ 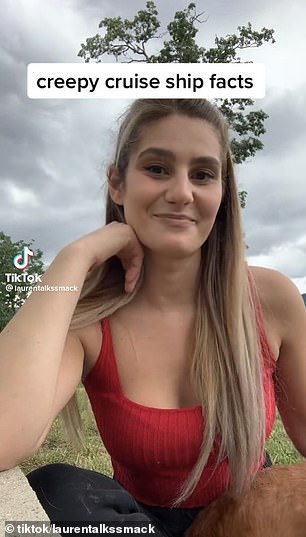 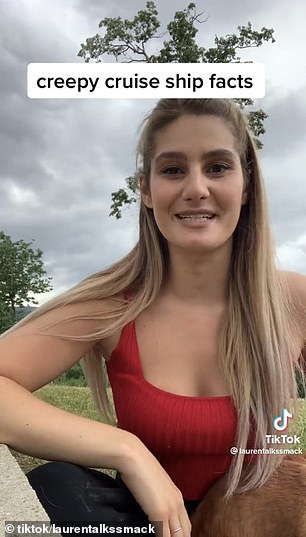 Earlier this year, young Aussie Lauren (pictured) shared two little-known facts about cruise ships. Lauren said the massive ships usually have both a morgue and jail on board

At one point Lauren claimed she saw a deceased body being wheeled out.

‘When we worked on a cruise ship, we actually saw a dead body getting wheeled out of the morgue, obviously they had a cover over it, but that in itself is so creepy and it made me not want to work on a cruise ship anymore,’ she said in the clip.

She described the experience as ‘confronting’ but understands awful situations can take place at any time, and so a morgue is necessary.

‘And then they obviously have a jail cell – so if anyone’s doing anything wrong, they’ll just lock them in there,’ Lauren said.

Lauren added how some cruise lines don’t have a ‘deck 13’ because of ‘superstitious’ reasons, which she found bizarre.

Both the morgue and jail would likely be on the lower decks of the ship away from passengers.

Cruise ship workers confess the shocking truth about what REALLY goes on at sea:

Guests reported that the Vision of the Seas transformed into a ‘floating Geordie Shore’ where people were ‘snorting cocaine’ and ‘all over each other’ on deck beds.

And while there have been reports of raucous guest behaviour like this on cruise ships over the years, there’s a whole other world going on behind the scenes where staff members get up to all kinds of mischief themselves.

While many people – both staff and guests – have a peaceful and refreshing experience on board a cruise, there have been racy anecdotes from staff members who have witnessed less G-rated activities taking place.

One common thread in these reports is the ‘crew bar’ where staff members take time off to drink and party together.

‘Crew bar is pretty much the only thing to do in the evenings, and since my go-to drink was less than $2, it was hard to argue anything else,’ a former cruise ship worker wrote on Reddit.

‘I mostly spent my evenings hitting on whoever would let me, whether it be waitresses, dancers, bartenders or dancers.’

There have also been reports of cheating and staff fraternisation on board.

‘Most of us are single. Aside from the very rare married couple working on ships, most folks are unattached. Several people came onboard with a bf or gf on shore and within a month they were happily shacked up with someone from the ship,’ a former cruise DJ wrote.

‘Crew sleeping with passengers is strictly (like, kick you off the next day strictly) forbidden,’ a former crew member said.

‘I worked on cruise ships for three years and have had three friends sent home over this.’

Despite this, many don’t regret a thing.

Ten family sized homes with three-bedrooms that cost £50,000 or less

The ‘Avengers 4’ Trailer Is Finally Here With A Grim "Endgame"