Ruan Sims is a former rugby league player and current commentator. She was the first woman to receive a player contract in the NRLW, and played both rugby league and rugby union for Australia.

You’re a commentator and very involved with rugby league at all levels, but you’re also a firefighter. How do you fit it all in?

Well, because it’s shift work, it’s a little bit more manageable. But you know what it’s like: if you find something you love doing, you just make it work. Whatever you have to do to get the job done. 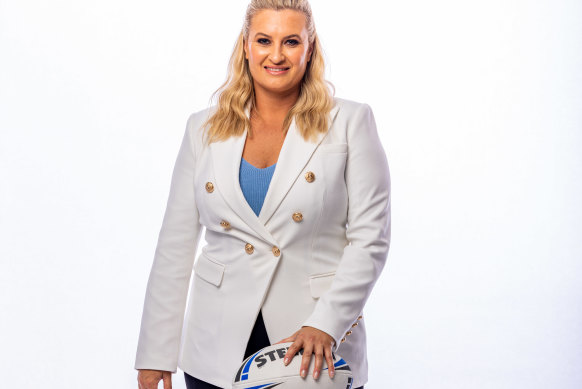 This kind of speaks to an issue with women’s sport in general though – do you ever feel a bit of resentment at the fact that rugby league players in the men’s game are wealthy and don’t have to worry about anything but playing, while women have to juggle playing and their day jobs?

I wouldn’t say resentment, no, definitely not, because I was able to be part of starting to build something really special. I think it was something to aspire to more than to be jealous of: it was like, all right, well, this is what they do in this space, what can we do in this space? It gives you something to aim towards.

And obviously, while there’s a lot more work to do, the NRLW has great momentum right now, doesn’t it.

It really does! It’s kicked off so beautifully, and you’ve got to put that down to the dedication of the players and the people involved in getting the game to where it is. What we see on the field every week is just a snapshot of what these women do over an extended period of time. It’s just exciting to see them getting out there and playing a great brand of footy, which is actually enticing more viewers to not just women’s rugby league, but rugby league in general as well. That’s exciting, and that’s why I think the NRLW is doing so well – the quality is there, you can see the passion every time they take the field, and it’s like the tagline: Same Game, Our Way. It’s the same game we’re used to, just done in a different way. And I think people really enjoy that. 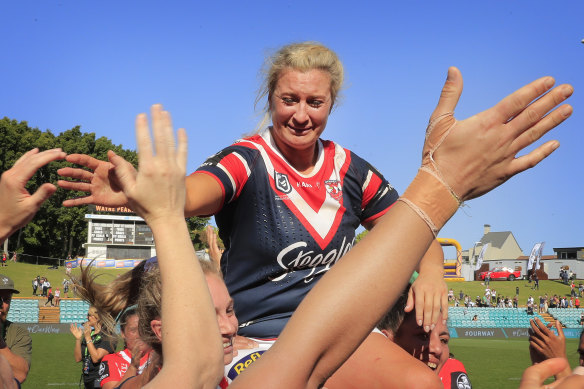 Ruan Sims after her final game for the Sydney Roosters in 2019. Credit:Getty Images

You’re from a very strong rugby league family (Ruan’s brothers Korbin, Ashton and Tariq are all former NRL and international rugby league players). Was league your game right from the start when you were young?

It was, the game we grew up with. The cycle of life in Gerringong was surf club in summer, rugby league in winter, and that was how we rolled through our years. And one fits the other really well, too, fitness-wise, and being outdoors. Also being very community-minded in both sports. It was unfortunate because there were no dedicated girls’ teams when I was little, so when I turned 11-12, I had to give it up and I wasn’t allowed to play it anymore. That was disappointing, but at the time that was just the way it was. I think that’s why I see now that we have these dedicated pathways to development in the women’s game, that’s what makes me so excited, because we’re really just starting to see the benefits of that now, with young players like Destiny Brill coming through, like Talei Holmes, all these girls coming through who haven’t had to put the footy down. I think that’s what’s helping to drive the standard of competition that we’re seeing as well. It’s pretty cool.

Do you have a lot of involvement with the young players coming through?

Yep, I’ve done coaching with the Tarsha Gale (under-18s) level and I do coach with the NSW Sky Blues too, so I’ve got a lot of contact with the next level of players coming through, which is really exciting. Getting to see those players coming through is what it’s all about. I do also get involved at the participation and grassroots level, which is wonderful, and it’s good to see a lot of the players doing the same and volunteering their time with the junior sides, I think that’s really important, especially with young girls. If they’re coming through and want to play footy, they can see some of the women they see on the TV each weekend, down throughout the week in clubland, and it gives them something to strive for.

I’m going to touch on something now that I got off Wikipedia so maybe it’s completely wrong, but – is it true that you hold a record for gumboot throwing?

Apparently so! It’s my mum’s favourite story. We were lining up at the Gerringong Fair or whatever it was, when I was 12 – so it was a long time ago. I thought it was a lineup for lollies, and they just handed me a gumboot, so I just hoicked it as far as I could, and I got a trophy but no lollies. So I was a bit disappointed. I think there was no more Gerringong Fair after that, so I don’t think it was by design, I think it was just by default that I hold that record. But I’ll take it, it’s my claim to fame.

You don’t think you threw it so far that they just said, pack it up, there’s no point holding this fair anymore?

The NRL grand final is on Nine, Sunday, October 2.