However, there are reservations about the government’s decision to appoint former Labor defence minister Stephen Smith as one of the two lead reviewers. 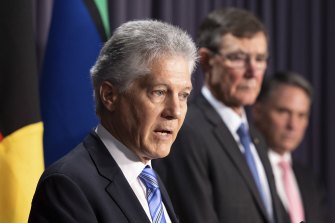 Prime Minister Anthony Albanese and Defence Minister Richard Marles have tasked Smith and former Chief of the Defence Force Angus Houston to conduct a defence strategic review and report back in early 2023. The intention is to have their advice around the same time as a report of a working group into the new submarine fleet.

Underpinning the new report will be the advice from a 2020 strategic update that attacks on Australia could come with short notice – a big change from the assumption over the past 30 years that there would be at least 10 years’ warning of any attack.

Houston described the existing strategic circumstances as “the worst I have ever seen in my career and lifetime”, with war in Europe, issues around Taiwan and the South China Sea, clashes in northern India, and new disruptive technologies.

“Clearly, our circumstances have changed dramatically over the recent past,” he said. 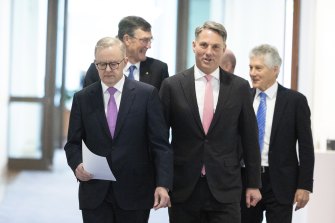 Tensions around Taiwan have escalated in recent days as US Speaker Nancy Pelosi visits the country. Chinese military jets circled the island as she touched down and its army said it would begin drills, including missile firing on waters east of Taiwan.

Marles labelled the new review the most significant piece of work since the 1986 report on Defence capabilities that fed into a white paper the following year.

That report’s author, Paul Dibb, said on Wednesday the task before Houston and Smith was a big challenge, particularly given the short timeframe.

There was urgency both to finalise the review and to set the ADF up for the new strategic environment, he said.

“Time is not on our side, there’s some urgency about this. And in my experience … it is very difficult to get Defence to recognise that some things are urgent,” Dibb said.

“What we need is a long-range strike … capability – and it’s got to be something that’s quicker than ordering large amounts of new fighter aircraft, warships and submarines.”

Australian Strategic Policy Institute defence and strategy director Michael Shoebridge said the review had to consider the “disturbing” new direct security challenge through China pushing into our region, as well as the lessons from Russia’s invasion of Ukraine about the importance of self-reliance.

“Like the Ukrainians, we need to be able to look after ourselves to bring the support of partners, allies and friends,” he said.

“And the fracturing world means relying on global systems to supply what you need in times of crisis is a bad plan.”

“If the situation is as bad as they fear, they need to increase the defence budget substantially. And they’ve got to actually sell that to the Australian people,” he said.

However, he said it was not ideal to have a former defence minister leading the review, saying there was a “legacy protection risk” since some delays plaguing defence projects now were a result of decisions made during Smith’s time in the portfolio.

The opposition echoed these concerns.

“When Mr Smith was last in government, he cut and cancelled defence projects, delayed decisions, and dismissed warnings about the strategic environment Australia was heading into a decade ago,” opposition defence spokesman Andrew Hastie said.

Albanese said the government had found the best people to conduct the review, and he and Marles recommitted to at least maintaining defence spending.

Shoebridge said Smith and Houston brought a detailed understanding of how defence operated as an organisation but warned they would have to revisit assumptions they may have held while in office about how the world works.

“This review isn’t about either of them defending their legacies. It’s about looking with clear eyes at the world we have today, Australia’s security challenges in it, and the kind of military that we need to deal with that,” he said.

“And I think they’re both smart enough.”

What to wear this weekend: FEMAIL picks out easy denim dresses