If the sight of Harry Styles standing in front of a gorgeous window in Venice is what you have come for, My Policeman might suffice. Did I mention that he is resplendently, defiantly naked? No doubt about it, that boy is pretty. 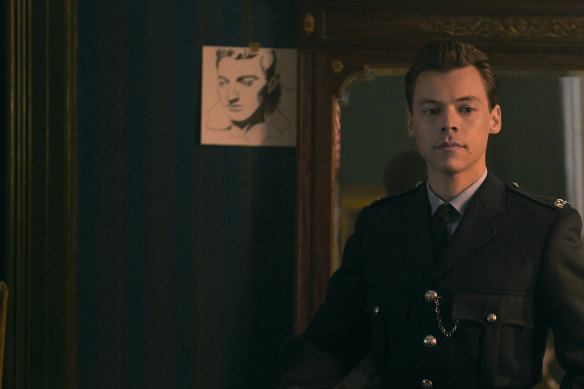 Harry Styles in a scene from My Policeman.Credit:AP

He’s not the only one in the scene who is pantsless. David Dawson, playing his lover Patrick, finally has Tom the policeman (Styles) where he wants him – a long way from Tom’s wife Marion (Emma Corrin). She’s back in England pondering the mess she has made of her life.

The setting is the late 1950s, when two men having sex was still a crime in England. Emma and Tom are recently married, but Emma has just begun to realise that Tom and Patrick precede her solemn vows. She has seen them embrace in the woodshed while literally peeping through a crack.

The English and American critics have ripped a few holes in My Policeman, which is adapted from a 2012 novel by English novelist Bethan Roberts. A few have acknowledged the performances, singling Styles out for the merest praise, while otherwise damning the film’s languid pace and lumpy structure. Those last two are probably fair: the script by veteran American writer Ron Nyswaner does not flow like honey, but the pacing is not all his fault. The director Michael Grandage, making only his third feature, gets off to a shaky start and only recovers in the second hour. 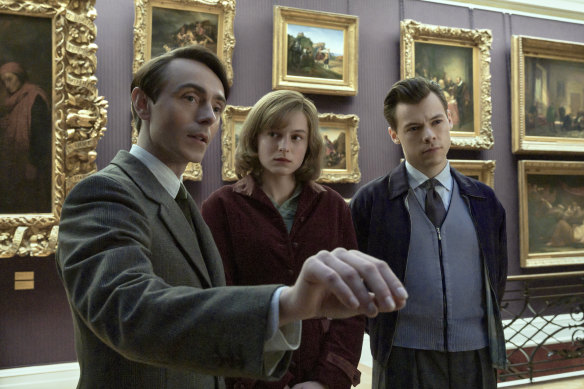 David Dawson (left), Emma Corrin and Harry Styles in a scene from My Policeman.Credit:AP

There’s an intro, set in Brighton, in which Gina McKee – prim and grey – opens her modest cottage to a bedridden man who has had a stroke. McKee’s husband, played by Linus Roache, refuses even to speak to the invalided man. The structural problem with this is that we do not yet understand anything about the characters, so it is hard to recognise that these are Emma, Tom and Patrick, 30 years later. A state of confusion is not usually a good place to start building a story. It took me a few minutes to recognise Rupert Everett – whiskered and jowly and without the power of speech – as the person who has experienced the stroke. Grandage has a distinguished career in theatre, lately as director of the Donmar Warehouse in London. His instinct for drama and performance is strong; his awareness of what the camera can and should convey less so. 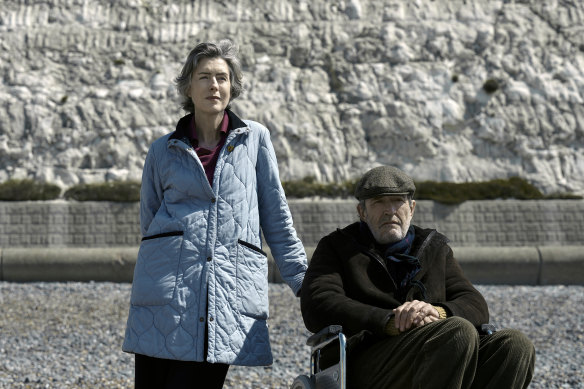 Gina McKee and Rupert Everett in a scene from My Policeman.Credit:AP

Even so, the longer it goes, the better My Policeman gets, largely because it describes a beautiful and terrible story. The young Emma is helpless at the sight of young Tom (Styles), the brother of a friend. He is recently back from the army. They begin to bond, he teaching her to swim, she teaching him about art and books. He introduces his friend Patrick, an art curator at the Brighton museum. They become best buddies in the prime of their lives. Blind Freddie can see what is on Patrick’s mind, but that’s the nub: many people were blind to such things in that era. Many tragedies were built on that blindness.

Styles is far better than expected. He has only appeared in two earlier films. In this one, he is convincing as a young man with limited education and the face of a Greek god. He never looks as if he understands that. That innocence is part of what makes Tom so appealing. Emma Corrin, relatively new to the big screen, has to do more work in her role. We will see a lot of her in the future.

In terms of sexual politics, the film is complicated. What these two men do to Emma is awful, even if only Patrick understands how beastly. We are led to excuse them because of the repression and routine bashings of gay men by the police at the time. They are forced to seek cover and Emma is the best cover. What the older Emma does in later life – to take Patrick into the home he all but wrecked – becomes an act of heroism, or is it more sublimation? That question gives the film some stature, although some will have given it up before then – even with the attraction of Harry Styles’ perfect arse.

My Policeman is exclusive to Prime Video, Amazon.

'Jamsu' is the new Korean beauty trend women are obsessed with

How to wrap Christmas presents using no cellotape and scissors