I lead a double life.

Monday to Friday, I am a weight management expert – but on weekends, I’m a horror model.

Needless to say, I get asked about it a lot at this time of year, so it’s about time I told the story about how my side career began.

I’ve been fascinated by horror from the moment I first started watching films like Halloween and Evil Dead when I was a teenager. I was immediately drawn to anything spooky – I love the tension and nervous anticipation, and the jump scares!

But I only first discovered how much I enjoyed getting dressed up for Halloween after meeting my husband, Rick, 20 years ago.

Rick is the talent behind Horrify Me, a unique Horror Fine-Art Portrait Photography Studio and I model for him in my spare time. It started by happy accident…

When I met him in 2002, we discovered we shared a joint love of gore – bonding over horror movies and make up and costumes. It meant we started getting dressed up at Halloween, which was great as he was talented at applying make-up.

He is completely self-taught, having started as a child and is inspired by the special effects masters of the 1970s and 1980s such as Tom Savini, Stan Winston and Rick Baker.

Every year we would go to our friends’ and have a spooky party, surpassing our efforts every time, dressing up as the Grim Reaper and the Joker for example. 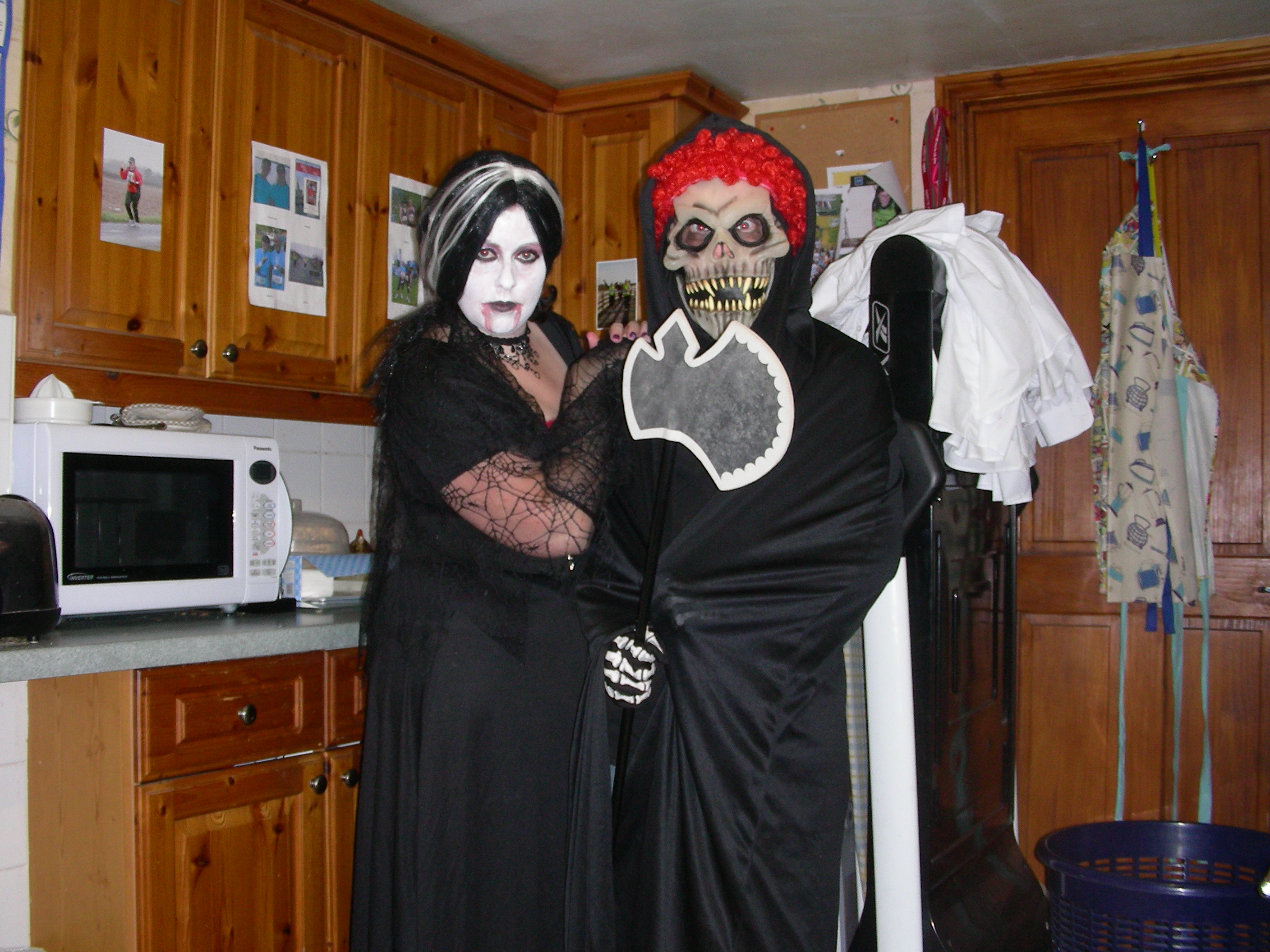 Then at the end of 2013, Rick – a graphic designer by day – was asked by a local author writing a book about zombies if he could create their book cover. Of course, to us, that didn’t seem like work at all.

We hired a local photographer, and a few of us got together to dress up as zombies – with Rick taking care of the make-up. It was ghostly and dark, sometimes with wounds and fake blood, and contact lenses inspired by the best zombie film of all – the 1978 version of Dawn of the Dead!

Back then I had no idea how to pose properly but I did my best, under Rick’s direction.

Once we shared the pictures on social media, people were saying: ‘I wish I could do that’ and, ‘How do I book a shoot?’ So, Rick trained to be a photographer, and ‘Horrify Me’ was born.

I was Rick’s main model from day one; I had absolutely zero modelling experience but found I turned into a different person and felt so much more confident once I got the makeup on.

Once various professional models started to hear about us they wanted to come along to get pictures for their portfolios done and I soon learned what to do from them.

How long it takes to get ready really varies according to how much makeup there is to do. Vampires are the quickest, but anything with prosthetics and fine painting can take up to 10 hours.

It started off with just zombies and vampires but together we’re a creative pair, and we’ve created all sorts of unique and original characters, as well as replicating scenes from movies.

We’ve done everything from the wolf from Little Red Riding Hood and a nurse from Silent Hill to The Grim Reaper and many more.

Various materials are used in the looks, including face and body paint, silicon, and latex as well as fake hair.

Now, I embrace being characters such as Morticia Addams from the Addams Family, Vampira and the Bride of Frankenstein. Other horror fans have been so inspired by what we do that I’ve even been made into tattoos around the world, and shown in some magazines, too.

It feels really weird to know people are walking around with tattoos of me on their skin, but also very flattering that people like the art we created so much that they want to wear it for life.

The most recent shoot I did was as a female version of Freddy Krueger from the Nightmare on Elm Street movies, and it’s absolutely one of my favourites. Though, even I admit, it’s gruesome.

I was wearing a full face of prosthetics, which meant spending five hours in make-up.

To make the character come to life, I had to wear some rotten-looking false teeth, but not in the way that you would normally wear them. They were stuck to my lips, so I couldn’t eat or drink anything once they’d been attached. They had to be put on early, so the rest of the make-up could be built up to fit around them.

My costume was completed thanks to a Freddy fancy-dress jumper I’d bought almost 10 years ago for a Halloween party, which I ripped up for the shoot, along with the famous hat and gloves. I wore a pair of black leggings and some heeled stiletto boots, which I thought made me look strangely elegant, albeit ghastly at the same time.

We always like to make our take on characters a little different, rather than an exact replica. This could be a female version of a male character for example, like Freddy.

What I love the most is being able to really get into character and recreate iconic poses.

In this instance it was ones that Freddy Krueger is known for in Nightmare on Elm Street, like one of his classic threat poses in the way he stands to menacingly display the glove.

I also added in some of my own more glamorous poses like putting my hands on my hips and sticking my hip out just to mix it up a bit.

A member of the public can book a shoot to be a zombie or vampire; or they can be Freddy Krueger, Valak the Nun or a demon if they want to.

There are also in-house projects that take place, including the making of prosthetics and hiring in of other models.

Our work has also been recognised and endorsed by some of the biggest names in horror, like Tom Savini (special effects master and actor in many zombie films including the 1978 version of Dawn of the Dead), the Soska Sisters (American Mary, Rabid), Linnea Quigley (Return of the Living Dead), and Oscar Winner Howard Berger, special effects for The Walking Dead.

They have written testimonials or made contributions to our Portraits of Horror book and it feels incredible as they have been our idols for so many years.

As much as we love doing it, I can’t see it being a full-time job as it would then feel too much like work, and we both love our other businesses – YourOneLife Healthy Weight Solutions and Absolute Graphix too much – but it’s so great to have the variety.

Dressing up is so much fun, and certainly not just for kids.

Most people have photo shoots to make them look prettier, but I have them to capture me looking horrific and it’s by far one of my favourite things to do.

It feels so amazing and a great way to de-stress to be able to get into character and model. It’s like stepping into another world for the day as ‘Mrs Horrify Me’.

You can find out more about Claire here, and you can find her Instagram here.

In this exciting new series from Metro.co.uk, What It Feels Like… not only shares one person’s moving story, but also the details and emotions entwined within it, to allow readers a true insight into their life changing experience.

Where is Holly Willoughbys red dress from? ITV This Morning stars outfit details