The fire truck was out of water and the nearest dam was beyond reach behind a wall of roaring flame. 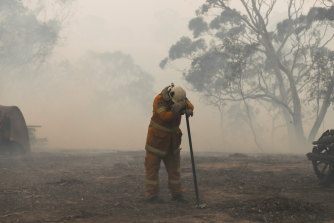 Chris Montgomery and his mates from the Carwoola Rural Fire Brigade, determined to save a farmhouse, were reduced to using their rakehoes to battle the fire.

And there, on the hot blackened ground, smoke filling the air, Montgomery was briefly overcome.

“I put my head down to get a breath of air and try to clear the smoke out of my eyes,” he remembers.

“I just needed 30 seconds or so, leaning on my rakehoe.” 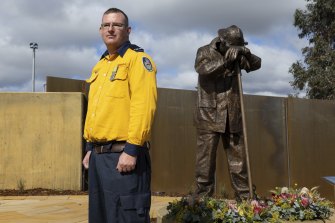 “It’s a symbol of every firefighter,” says Chris Montgomery of the statue.Credit:Alex Ellinghausen

At that moment, photographer Alex Ellinghausen of The Sydney Morning Herald and The Age captured an image that will forever tell a story of the sacrifice and struggle of those who volunteer to stand between community and disaster.

The photograph, taken on Friday, November 29, 2019, has been granted a form of immortality by the NSW Rural Fire Service.

Rendered in bronze as a sculpture, the image now stands in a memorial garden in the RSL’s state training academy at Dubbo, honouring all NSW RFS firefighters and contractors who have died in the line of duty.

The work, “Catching a breath on the firefront”, by Andrew Poppleton of Melbourne’s Meridian Sculpture, was unveiled on Friday. 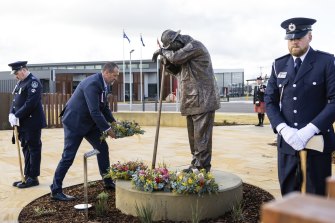 Montgomery, a volunteer with the Carwoola brigade near his home in Queanbeyan, had no idea Ellinghausen had taken his photo until his mother saw it in The Sun-Herald and recognised her son.

Ellinghausen did not know Montgomery’s name until alerted much later.

“He and his mates were flat out – I didn’t want to get in anyone’s way by asking for names or details at a time like that,” he said.

Indeed, the volunteer firefighter and the photographer had never met until Friday’s unveiling of the sculpture. 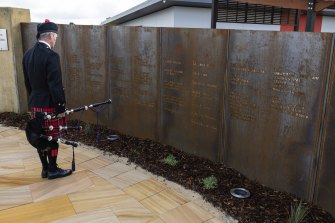 Both agreed the image was bigger and more significant than themselves.

“It’s a symbol of every firefighter,” Montgomery said.

“All of them can look at that photo and that sculpture and know exactly what’s going on there. They can relate to it because that’s them.”

Ellinghausen said he never felt comfortable being made part of the story. 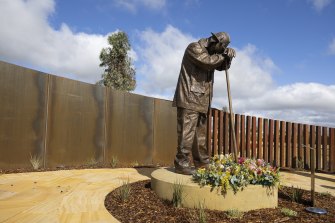 The work, “Catching a breath on the firefront”, by Andrew Poppleton of Melbourne’s Meridian Sculpture, was unveiled on Friday.Credit:Alex Ellinghausen

“I simply took the photo,” he said. “I was just there to tell the story of what the firefighters did.”

He recalled a massive plume of smoke and a line of cars evacuating the area as he drove from Canberra towards the North Black Range fire, which would eventually consume 40,000 hectares of bushland, threaten the town of Braidwood and destroy at least five homes. It was not declared extinguished until January 28, 2020, two months after it was set off by a lightning strike.

“It was the first fire of the black summer that I covered,” Ellinghausen said.

“When you see a fire of that enormity, it is a terrifying sight and up close, the smell of it is overwhelming. Afterwards, it sticks to your clothes and inside your car and it follows you for a long time.

“Those volunteers do an amazing job in circumstances most of us can’t imagine.”

Montgomery was one of a crew of five sent to fight the North Black Range fire on a track known as Little Bombay Road, a few kilometres south-east of Braidwood, that afternoon.

By early evening, their truck’s water tank was empty and they were battling to save a house, using rakehoes to extinguish spot fires as the main blaze bore down on them.

They were not relieved until well after midnight.

By then, Montgomery and his mates were beyond exhaustion, but were proud to declare that they had not only saved one house, but two.

And now, the moment lives on in bronze, honouring all in the NSW RFS, the biggest volunteer fire service in the world.

Curious Cribs: Boldly Rent Where No Man Has Rented Before