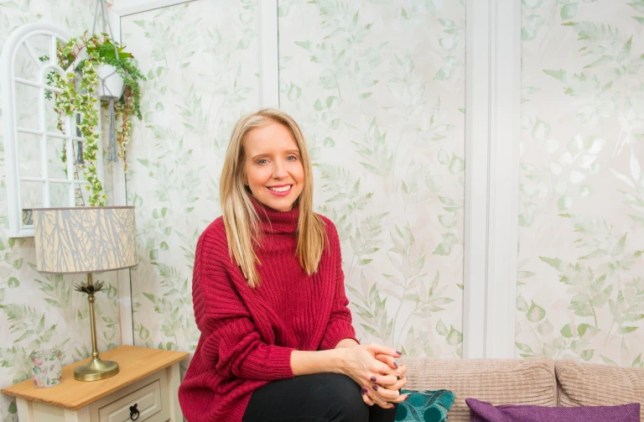 The other day I read an interview with Loose Women presenter and Birds of a Feather actress, Linda Robson.

In it, she said that she never takes off her clothes in front of her spouse ‘I find it quite difficult. I’ve never undressed in front of my husband so when I put my pyjamas on I go into the bathroom.

‘My kids have seen me undressed but not my husband or former partners because my mum was an Irish Catholic.’

Now, I’m not Catholic – I have no religious reason to dress behind closed doors – yet, I share every sentiment of Linda’s interview.

In fact, I’d go as far to say that I think if more people followed her example, we’d all have happier marriages.

Like Linda, when it’s time to get ready for the night, I slink off to the bathroom to get my PJs on. I then come back into the bedroom, fully clothed in my nightwear, before getting into bed.

This is how I’ve always done it, tired or not. Likewise, I don’t let my husband in when I’m in the bath, doing my makeup or – God forbid – going to the loo.

My husband is used to my ‘prudishness’. He’s from Romania – and used to a more free-spirited approach to such things – but I just say ‘I’m English’, and he tolerates it.

I’ve heard stories of so many women who let their husbands in on all their little secrets – watching them shave their legs, sitting on the loo when they’re in the bath, sitting and looking at how they apply make-up.

I have never understood it. I believe in ‘keeping something back’ – lose the magic in marriage and you may as well say goodbye.

It’s the same with blowing wind, burping, nose-picking, shaving, hair-dyeing and all of those personal things. I’ve never done it with my husband and don’t understand people who do.

How do all these people still find each other attractive? No wonder so many people have affairs

You need to keep a bit of mystique – God knows there’s enough drudgery and dullness in day to day life with childcare, housework, careers and commuting.

I don’t want to add to it with public bodily functions and a bent, hunched figure getting into nightwear.

Some friends have said I am a prude, and one friend even admitted she and her husband have baths and go to the loo at the same time while watching Netflix on a laptop.

Another friend said she’d never hide to get changed away from her husband – ‘I am what I am,’ she said, ‘he can like it or lump it.’

Others have said I am not a feminist, trying to keep some ‘ladylike’ secrecy about me – I disagree.

Getting changed in front of one’s other half every night isn’t just awkward if you’re shy, it’s a passion killer. There’s nothing particularly endearing about watching someone struggle to take off their tights.

You can imagine my shock when I read a study of 1000 people and found that women only waited one year and two months before sitting in the bathroom while the other half used the loo.

The same study found that women waited nine months before farting in front of their partner and men would let their other half pop their pimples 10 months into the relationship.

How do all these people still find each other attractive? No wonder so many people have affairs.

Don’t get me wrong, I let my hubby see me naked, and he’s seen me in the throes of labour, breastfeeding and through the exhaustion of sleep deprivation when our children were young.

But even during that time, I never thought to let him in the loo when I was going or pick spots in front of him.

Back in the old days, women dressed privately and, if they were rich enough, had a bevvy of other ladies to help them into corsets and undergarments. That all added to the mystery of what it was to be a woman and keep their shape – men found them fascinating.

Not anymore. Too many women in my opinion come in from work, fling their bra off in front of their bloke before dossing on the sofa in tracky bottoms.

This isn’t a rage at women either. Too many men burp, fart, leave toilet doors open in front of their other halves too. My husband has even taken my lead – he gets changed into his pyjamas when I’m not looking.

So, at the risk of sounding old-fashioned or opinionated, I’m with Linda on this one.

I don’t think it’s prudish to get ready in another room, no matter how long you’ve been married or in a partnership – I think it’s having self-respect and keeping some mystery in a relationship.

What is Delay Repay compensation, and how can I claim a refund on delayed flights and lost luggage?

I thought I was asexual, but maybe I'm aromantic instead? | The Sun