Financial markets are betting Australia’s official interest rates will reach 4.1 per cent by the middle of next year, prompting warnings from economists that such tight monetary policy would drive the country into recession and wipe 30 per cent off house prices.

After a string of central banks around the world lifted official interest rates on Thursday and Friday, markets in Australia sharply increased their expectations the Reserve Bank would follow suit. 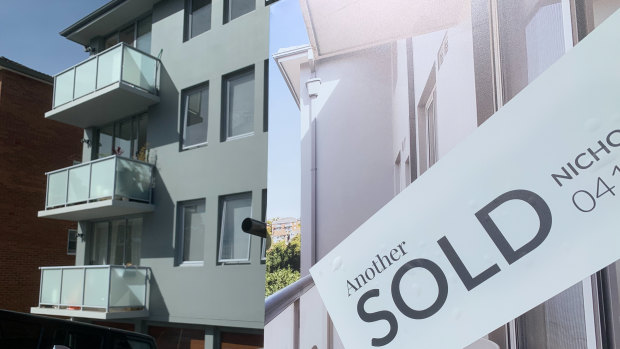 Financial markets are pricing in a cash rate of 4.1 per cent. AMP Capital’s Shane Oliver says such a cash rate would wipe 30 per cent from Australian house prices.Credit:Peter Rae

The RBA lifted its official cash rate by half a percentage point to a seven-year high of 2.35 per cent earlier this month in a bid to bring inflation – tipped to reach almost 8 per cent by year’s end – under control.

Most economists and markets expect another half of a percentage point increase when the RBA board meets on October 4.

But markets now believe the RBA will go much further in the following months, driving the cash rate and mortgage rates to levels not seen in a decade.

AMP Capital chief economist Shane Oliver said the market pricing was now “crazy” given the type of economic damage a cash rate of 4.1 per cent would do to Australia.

“You lift the cash rate to that level, you drive the country into recession. You probably knock 30 per cent off house prices,” he said.

“We’re talking about a two to two-and-a-half-fold increase in mortgage repayments for millions of people. This is tens of thousands of dollars worth of spending power taken out of the hands of consumers.”

A 30 per cent fall in house prices would in effect wipe out the coronavirus pandemic run-up in values across most capital city markets and leave many mortgagors holding property worth less than they paid.

The ratcheting up of interest rate expectations follows aggressive actions by some of the world’s most important central banks over the past 48 hours.

That is after increases earlier this month by the RBA, New Zealand, the European Central Bank and Canada.

Economic indicators are also increasingly pointing to a global downturn. The closely watched US Conference Board leading index, released on Friday morning, fell for a sixth consecutive month in August and is now down 2.1 per cent from its February high.

“A major driver of this slowdown has been the Federal Reserve’s rapid tightening of monetary policy to counter inflationary pressures. The Conference Board projects a recession in the coming quarters,” the board’s senior economics director, Ataman Ozyildirim, said.

Oliver said financial markets were heavily focused on the actions of America’s Federal Reserve, which has signalled it is prepared to drive the world’s largest economy into recession to kill inflation pressures.

But he argued local markets were ignoring the key differences between the Australian and US economies.

While most Americans are on 30-year fixed rates, in Australia people are either on variable mortgages or short-term fixed rates. The level of household debt carried by Australians is also double that of American home buyers.

“The Fed is possibly making a huge policy mistake. It doesn’t mean we have to go over the same cliff here,” he said.

Barrenjoey chief economist Jo Masters said in light of the Fed’s actions, the RBA was likely to push official interest rates to a peak of 3.35 per cent early next year.

That would probably leave the country in a shallow recession, forcing the RBA to reverse monetary policy in the second half of 2023.

“As the data confirms rapidly weakening domestic activity, we expect the RBA will start an easing cycle in the December quarter 2023,” she said.

“This should be sufficient to leave any recession as relatively short and shallow, and perhaps that is what is needed to cement the path back to 2 to 3 per cent inflation. A narrow path has just become even narrower.”