A woman has provoked debate after stating that she gets ‘mixed reactions’ when she asks guests to take their shoes off in her home.

Writing on British parenting forum Mumsnet, the woman explained that some visitors have no issue with her house rule but others ‘roll their eyes and seem awkward.’

Responses were somewhat divided, with many people saying it is ‘rude’ to ask a guest to remove their shoes, while others said it is ‘disgusting’ to wear footwear inside. 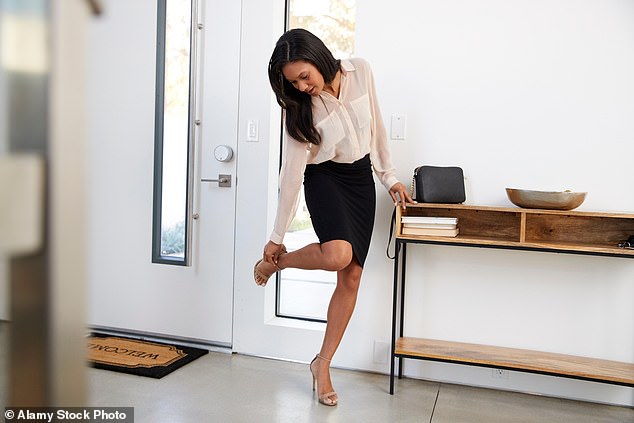 Explaining her point of view the mother wrote: ‘I don’t think I am being too unreasonable by asking visitors to my home to take their shoes off at the front door.

‘I am house proud but by no means a clean freak – just my personal preference for cleanliness and hygiene reasons as I walk around indoors in my bare feet.

‘Some visitors, particularly friends, are fine with it. But some family members or other visitors roll their eyes and seem awkward.

‘I take my shoes off at other people’s houses when I visit them as I like to practice what I preach. Do you enforce the same rule in your home?’ 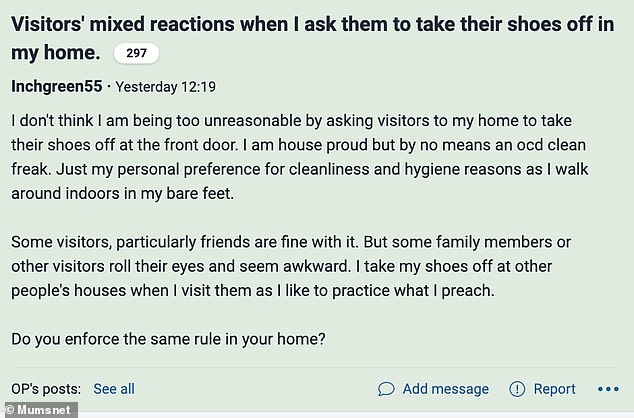 Many argued that she’s entitled to set the boundaries in her own home.

One person said: ‘Your house, your rules. Anybody that doesn’t like it should stay away.’

Another wrote: ‘I wear house slippers in my house but don’t ask others to remove their shoes. But it’s your house, so do whatever suits you.’

While a third said: ‘Your house, your rules. The only time it bugs me is when it’s dressy and my shoes being off ruins my outfit!’

However some disagreed saying they don’t like being asked to remove their shoes. 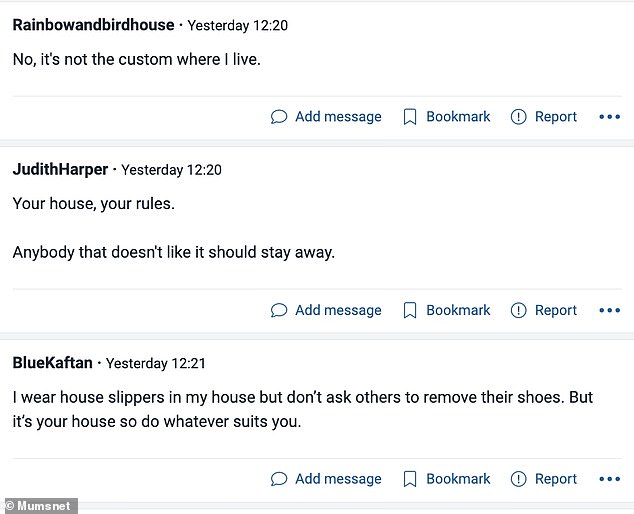 One person said: ‘No. I hate being asked to balance awkwardly in someone’s hallway to remove my shoes, then leave them there for everyone to see and then sit around with my socks on display. All very inelegant and embarrassing and I don’t usually visit again.

Another said: ‘It’s not custom where I live either and it would be seen as the height of rudeness if you insisted. You’d be the talk of the parish.’

While someone else said: ‘No, and I hate being asked to sit there in my socks in someone else’s house.

‘Fortunately I’ve only ever been asked once (by my mother-in-law’s neighbour) and I’ve never been back to her house.’

Others admitted they would prefer guests to walk around their home in shoes rather than barefoot. 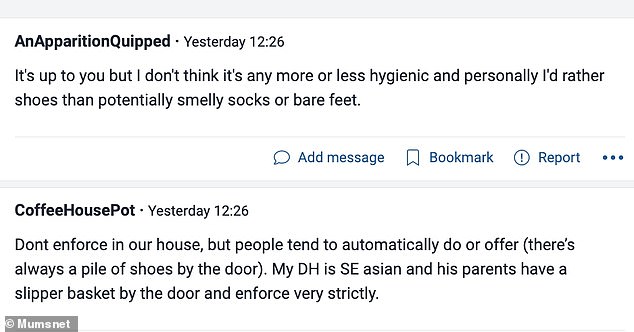 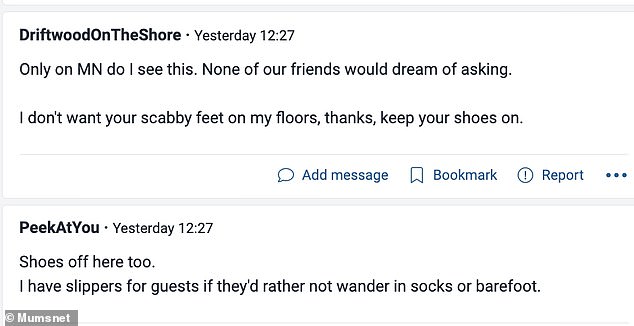 One woman said: ‘Shoes on doesn’t bother me downstairs because we have all hard floors that are easily cleaned.

‘While I’m totally respectful of other peoples shoes off rules, I think it’s bad hosting and bad manners to insist on it from guests.

‘I know a few people with diabetes who are advised to wear shoes or slippers and people’s foot care is more important than my floor.’

Another wrote: ‘It’s up to you but I don’t think it’s any more or less hygienic and personally I’d rather shoes than potentially smelly socks or bare feet.’

While someone else said: ‘Only on Mumsnet do I see this. None of our friends would dream of asking. I don’t want your scabby feet on my floors, thanks, keep your shoes on.’ 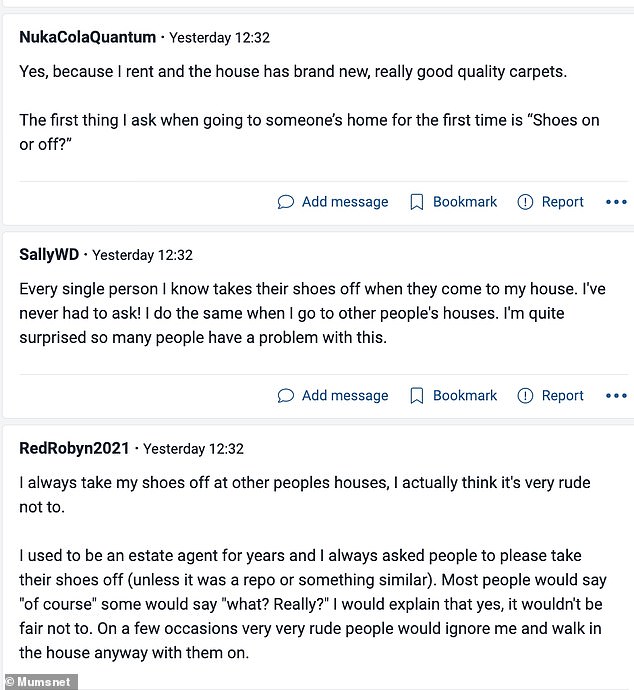 Some people admitted they were ‘shocked’ by the amount of people who don’t take their shoes off indoors for hygiene reasons.

One person said: ‘it absolutely blows my mind that most people on Mumsnet don’t remove their shoes! I find it fascinating.

‘It mildly annoys me that some family members don’t remove their shoes in my house as we have young crawling children, but I’m not that hung up on it.

‘However I would NEVER dream of walking into someone else’s house with my shoes on! It feels soooooo rude and disrespectful.

‘The vast majority of people I know feel the same. Also for what it’s worth – the family members that don’t remove them for me are older and would insist on shoes being removed in their own home.’

Another agreed saying: ‘We are a no shoes house, it just seems weird to want to tramp through your house in shoes you’ve been walking around outside in.

While someone else said: ‘Every single person I know takes their shoes off when they come to my house. I’ve never had to ask! I do the same when I go to other people’s houses. I’m quite surprised so many people have a problem with this.’ 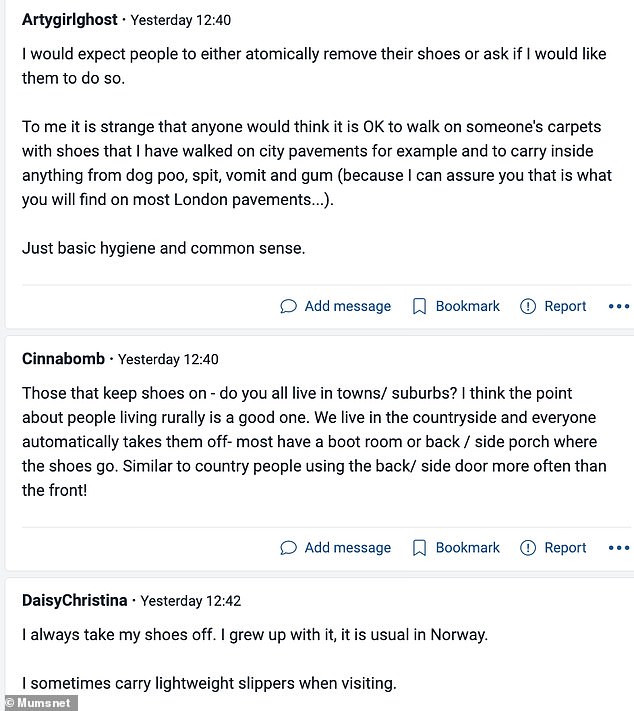 While some others made the point that it is the norm in rural areas to take shoes off as they could be muddy.

One person explained: ‘Those that keep shoes on – do you all live in towns/ suburbs? I think the point about people living rurally is a good one.

‘We live in the countryside and everyone automatically takes them off- most have a boot room or back/side porch where the shoes go. Similar to country people using the back/side door more often than the front!’

While someone else claimed it should be the same rule after walking on city pavement, saying: ‘Would expect people to either automically remove their shoes or ask if I would like them to do so.

‘To me it is strange that anyone would think it is OK to walk on someone’s carpets with shoes that I have walked on city pavements for example and to carry inside anything from dog poo, spit, vomit and gum (because I can assure you that is what you will find on most London pavements…). Just basic hygiene and common sense.’

UK economy officially enters recession – how it will affect your finances