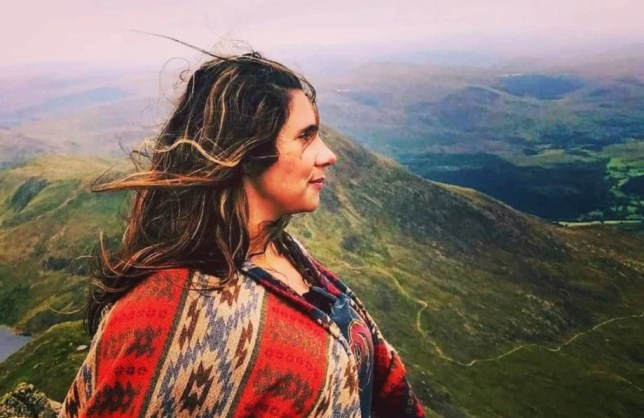 ‘Is that an ashtray?’ asked one of the other women who happened to be in my local art centre, by way of making conversation.

‘No, it’s a vulva,’ I answered truthfully.

‘A what?’ she gasped, looking at me in disgust, before walking away shaking her head.

That’s when I realised just how disconnected so many women are with their own bodies. Some people have never even looked at themselves ‘down there’ in a mirror.

When do we learn that certain parts of women’s bodies are taboo?

For me, I think it was in secondary school. Sex education was functional, focusing on the biology of reproduction, and girls and boys were separated for the lesson where the girls were taught about periods.

From that moment on, I understood that the things my body could do – such as menstruation, birth, giving pleasure and the menopause – were meant to be hush-hush.

It wasn’t polite to talk about them and for many years I didn’t even question that. I think so many women go through their lives feeling ashamed or embarrassed about their bodies.

Then, in 2019, I watched the Channel 4 documentary 100 Vaginas, which followed artist Laura Dodsworth’s project to photograph 100 women’s private parts and speak to them about their relationship with their bodies.

I was really blown away by how open and honest it was and it got me thinking about the stereotypes we have about this totally normal – and beautiful – part of our anatomy.

I’ve always loved art and I began working with clay about six years ago as part of my recovery after being hospitalised and seriously ill with a virus.

Shaping putty is so mindful; it’s a ‘flow’ activity and you completely immerse yourself when you’re casting clay.

I’d been working on the usual pots and vases, but after watching 100 Vaginas I played around and fashioned the abstract form of a vulva out of clay.

I painted my ceramic vulva a dark gold and posted it on social media, where thankfully the reaction was much more positive than the one I received from the woman at the kiln. In fact quite a few people contacted me to ask if I could make them one.

I started an Instagram page and an Etsy store. Quite a few colloquialisms for women’s bodies are degrading but I like ‘yoni’ because it means ‘sacred space’ in Sanskrit.

I made the works in all different shapes and sizes, coloured them and set stones to represent parts like the clitoris.

Some women bought my ceramic yonis as decorative pieces; others even put them on their altars alongside candles and crystals to worship the divine feminine.

It was certainly a conversation starter – women began opening up to me about their relationships with their own bodies and I heard so many sad stories of people who had suffered traumatic births or sexual abuse.

In 2019, I was invited to a women’s circle to help some ladies make castings of their own vulvas as part of a workshop on body positivity. It was a really empowering day.

With casting, the women lower themselves into a moulding material and take control of the experience, meaning they hold themselves in place as it sets around their body. Once this outline is made, it then becomes a mould that I fill with clay to produce the cast.

Afterwards, a sexual abuse survivor contacted me to ask if I could help her make a cast. She felt like she’d lost her power and she wanted to take it back. It was an incredibly moving experience.

It was such a profound moment when I showed her the end result – there were plenty of tears. I felt like I’d helped her do something really powerful.

Now I do castings regularly and I try to make it as empowering as possible. I’m really just there to guide and help, by instructing women on what to do.

It has taught me though that no two vulvas look alike and that’s completely normal. Vulvas are as unique as faces and that shouldn’t be a surprise. After all, penises are all different shapes and sizes, too.

I’ve started running feminine empowerment workshops with small groups of women, where we practice womb meditations – we focus our energy towards connecting with that area of our body – and talk about our relationships to our bodies.

I also teach them the correct anatomical names for their parts. Lots of women haven’t been properly educated on the correct words and mix up the terms ‘vulva’ and ‘vagina’. A lot of people are surprised that the word ‘vagina’ isn’t an umbrella term.

Women of my generation grew up with sub-standard sex education – gleaning what we could from a sneaking peeks at girly magazines or Eurotrash on a Friday night with the TV volume turned down really low.

So many women, of all ages and for many reasons, have a distorted idea of what their bodies should look like and what’s normal.

Our vulvas are a place of birth, pleasure and pain, and they shouldn’t be a taboo subject. If my ceramic yonis can help more women love their bodies then my art is absolutely worthwhile.

As told to Jade Beecroft

Melissa McCarthy and Ben Falcone Got into a Fight Over Grapes