PETER HITCHENS: If Liz Truss was the answer, whatever was the question?

The Liz Truss tragicomedy, almost by accident, showed that we are a country in terrible debt. We live on a reputation for solvency that we no longer deserve.

Jeremy Hunt’s cancellation of the Truss Package on Monday morning was delivered and timed to placate the money markets. Our supposedly sovereign Parliament had to wait for hours to be told the same thing.

Let us look at the extent of the mess which this crisis has revealed, like a flash of lightning in pitch darkness which shows a traveller he is on the edge of a precipice.

In a frantic attempt to overcome the combined effects of our reckless welfare system and our pitiful schools, we are resorting once again to mass immigration to find people who will work hard for realistic wages. Our national idol – the NHS – is hideously expensive and often disastrously bad. All the money in the world could not fix it.

How quickly inflation, that horrible corrupting fungus, has become normal. The quickest way to wreck a society is to debauch its currency. Inflation has been hugely worsened by the Covid panic and our weird enthusiasm for foreign wars. 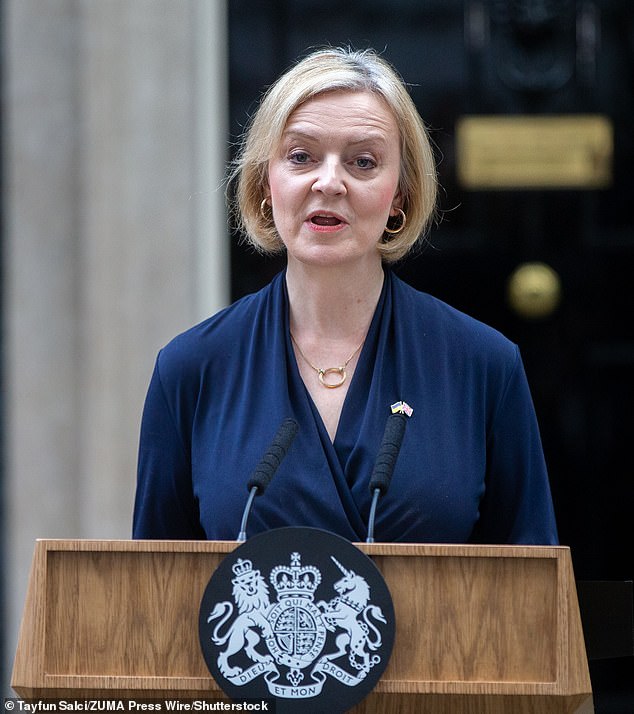 ‘It is worth wondering, if Liz Truss was ever the answer, what was the question?’

It punishes thrift and responsibility in every class. It rewards debt and improvidence. The shrinking of sterling on world markets will make us all permanently poorer. So will the rise in interest rates that has been certain to happen for years.

I think the only similar event in our recent history was the great crisis of 1931. After months of worry, a Naval mutiny against pay cuts – alerting the world to the decline of a once-mighty power – forced a devaluation of the pound.

International bankers, the equivalent of today’s bond markets, had been demanding welfare cuts. The then Labour government, which was unlucky enough to be in office, would not make them.

The resulting chaos crippled the Labour Party for a decade and put the country under a coalition government. It always amazes me that this huge and dreadful time of privation and despair, which devastated Wales, Scotland and the North, is hardly ever discussed, while we cannot get enough of the comparatively trivial Abdication affair of 1936. I have two points here. The current mess was unnecessary. People are to blame for it. Our society is in ruins because politicians of all major parties ruined it.

They attacked stable family life. They allowed the post-1960 BBC to wage a war against patriotism, religion and morality. They encouraged private debt. They removed wise controls on the twin curses of alcohol and gambling. They excused crime and let it rage and failed to prevent the spread of dangerous illegal drugs. They neutralised the police and courts. They destroyed manufacturing industry. They flung open our borders. They started stupid wars. They ruined the schools. They postponed the reckoning by borrowing and borrowing and hoping something would turn up.

The great economist and moralist Adam Smith – who knew you couldn’t be prosperous without being moral – said there was a lot of ruin in a nation. And our story of long, slow decline proves that. It has taken much effort to bring one of the greatest civilisations in human history to this state, but here we are.

It is worth wondering, if Liz Truss was ever the answer, what was the question? I will tell you. It ran ‘How can we keep deluding ourselves and doing nothing important to address the fundamental problems of our nation?’ Time and again, that question has been answered with another set of slogans, another smiling new face, another mountain range of debt, and crowd-pleasing promises.

But this time, even the slickest arts of propaganda could not conceal the pitiful emptiness of our modern political class. Ms Truss rose to the top precisely because she believed in nothing. Believing in things is right out of fashion.

She had no aim but her own career. The others are all the same. Will the Tory manoeuvres of this weekend, and the General Election that cannot be postponed much longer, find men and women who love this country so much they are prepared to tell its people the truth and face the unpopularity required to put things right? What do you think?

I am still puzzled about the new King’s decision to fly the Royal Standard in two places at once – Buckingham Palace and Clarence House – which I noticed the other day as I bicycled through Royal London. The Standard is a wonderful mystic emblem of monarchy. Wherever the King is, it is hoisted. When he leaves, down it comes. When the King dies, the Standard is simply transferred to his successor and is never at half-mast. It cannot be all that much of an effort to haul it down when he leaves Clarence House, or haul it up again when he gets home in the evening. I know he wants a streamlined monarchy but too much of this sort of thing will make it look more like a cheapskate monarchy, which cannot afford the tradition on which it is founded.

Peking thugs have learned from our police

There is justified fury against the behaviour of Peking’s thugs towards a protester outside the Chinese consulate in Manchester, dragging him off the street and beating him up.

If the Government had not been collapsing, this story would have dominated front pages for days. How dare a foreign government behave in this way on our soil? 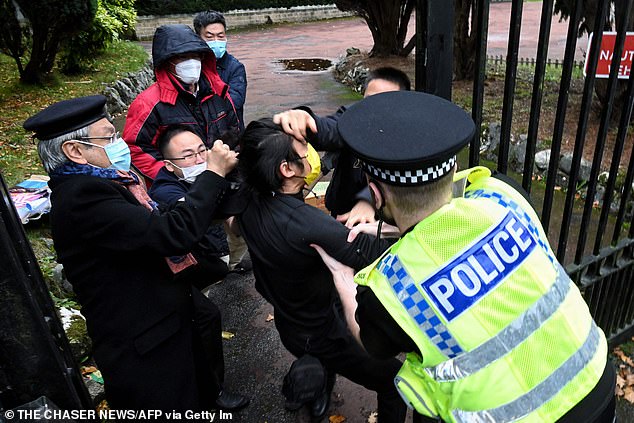 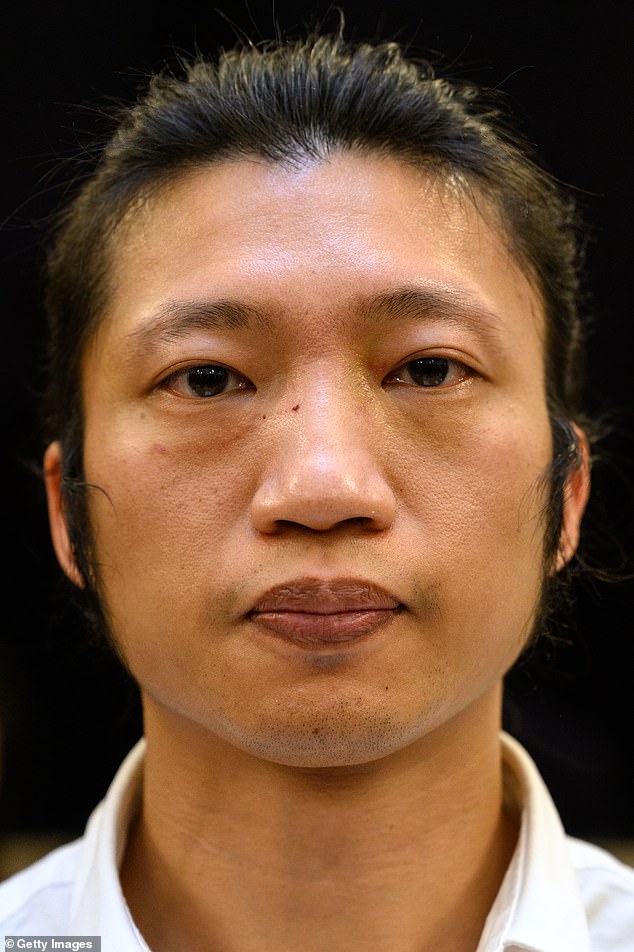 The Greater Manchester police officer who rescued Hong Kong citizen Bob Chan from Chinese diplomats deserves great praise for his quick and brave action. But why did the Chinese officials think they could get away with this? Is it because British police officers have themselves been rough with peaceful Free Tibet protesters in London, as they slavishly protected the Peking despot, Xi Jinping, from having to see things he never sees at home – free speech and protest? Did the Chinese deduce from that they could do as they did?

Lift the nasty, un-British decree on this man

One of the lasting legacies of Liz Truss’s miserable political career is the punishment without trial of Graham Phillips, the unlovable video-blogger who operates mainly in Ukraine and Russia. She was in charge of the Foreign Office when it imposed sanctions on him.

If anyone has criminal charges against Mr Phillips, then they should pursue them. If he is then found guilty by a proper court, with a jury and the presumption of innocence, then that will be just and I will not object. But Mr Phillips has been punished without any semblance of a trial. His offence appears to be that he has expressed the wrong opinions about the Holy Sainted Republic of Ukraine. He struggles to get any response out of the Foreign Office to his appeals against his treatment.

The sanctions prevent him from receiving payment for work or from paying bills. So the law forces him to break the law and become an outlaw debtor. And here my praise goes to Islington Borough Council, who had summonsed him for not paying his Council Tax. But when I told them that Mr Phillips was banned by law from paying that tax, they wisely and mercifully withdrew the summons.

Not everybody, I suspect, will be so understanding. Now that the Minister responsible for this unpleasant measure is about to spend much more time with her family, perhaps the Foreign Office, which still has some decent people in it, might think of withdraw withdrawing this nasty, arbitrary and un-British decree.