In memoriam.Prince Harry reflected on great-grandmother Queen Elizabeth II‘s “everlasting legacy” in his first official statement since her death.

Queen Elizabeth Through the Years: Photos

“In celebrating the life of my grandmother, Her Majesty The Queen — and in mourning her loss — we are all reminded of the guiding compass she was to so many in her commitment to service and duty. She was globally admired and respected. Her unwavering grace and dignity remained true throughout her life and now her everlasting legacy,” the 37-year-old wrote on Monday, September 12. “Let us echo the words she spoke after the passing of her husband, Prince Philip, words which can bring comfort to all of us now: ‘Life, of course, consists of final partings as well as first meetings.’”

Harry continued: “Granny, while this final parting brings us great sadness, I am forever grateful for all of our first meetings — from my earliest childhood memories with you, to meeting you for the first time as my commander in chief, to the first moment you met my darling wife and hugged your beloved great-grandchildren. I cherish these times shared with you, and the many other special moments in between. You are already sorely missed, not just by us, but by the world over. And as it comes to first meetings, we now honor my father in his new role as King Charles III.”

The Archewell cofounder hailed his late grandmother’s “commitment to service,” concluding, “Thank you for your sound advice. Thank you for your infectious smile. We, too, smile knowing that you and grandpa are reunited now, and both together in peace.”

Buckingham Palace confirmed on Thursday, September 8, that the queen died at age 96 after being placed under the supervision of her doctors hours earlier. She was surrounded by loved ones at her Balmoral estate in Scotland, with Harry touching down from London after her passing was already announced. He and Meghan Markle later joined Prince William and Princess Kate on Saturday, September 10, for a walkabout around Windsor to greet mourners and pay their respects. 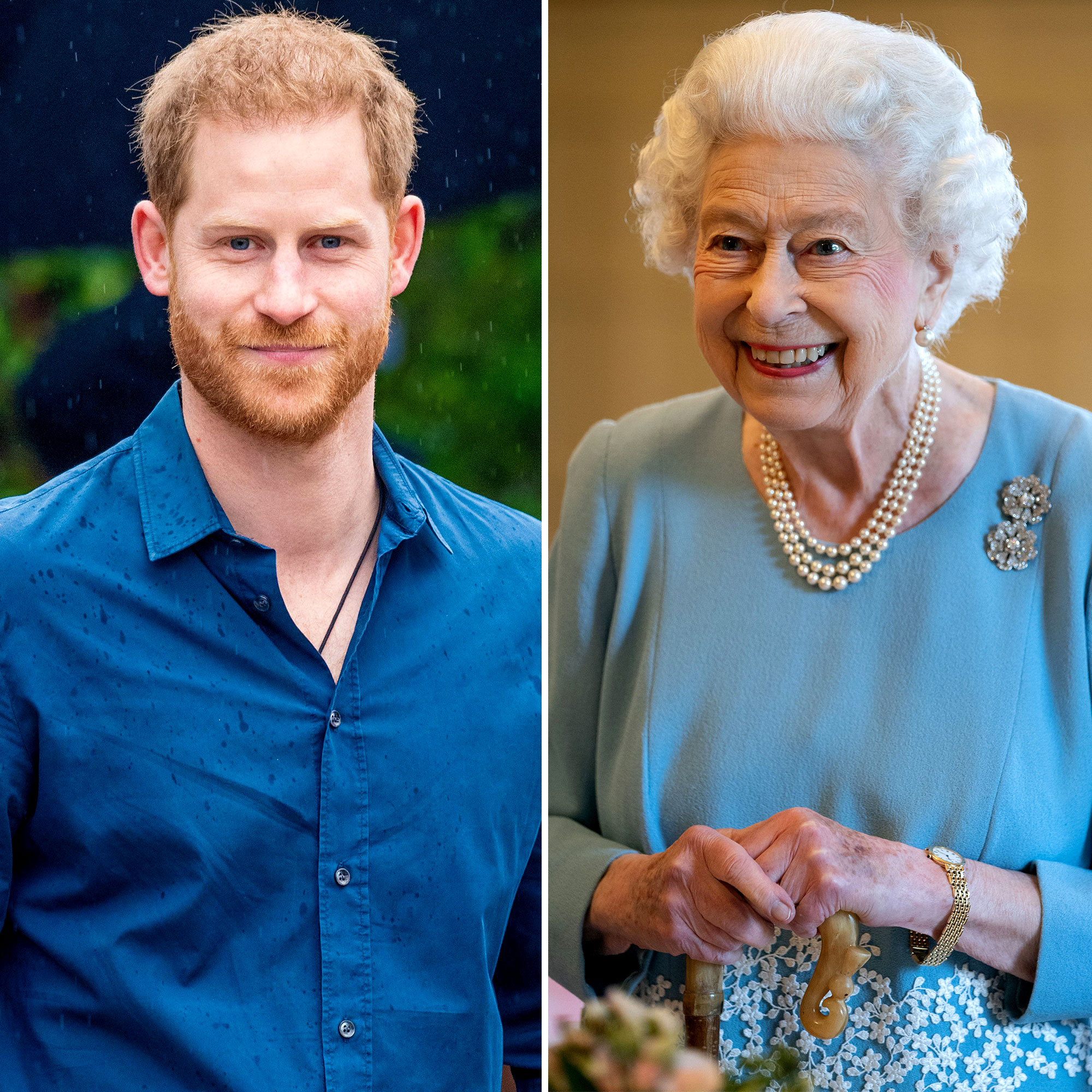 The Duke of Sussex previously checked in with his grandmother “nonstop” after she was briefly hospitalized in October 2021, a source told Us Weekly at the time. The duo maintained a close relationship after Harry and Meghan, 41, made their royal exit permanent in February 2021.

“I’ve spoken more to my grandmother in the last year than I have done for many, many years,” the former military pilot said during a March 2021 CBS tell-all. “My grandmother and I have a really good relationship and understanding. And I have a deep respect for her. She’s my Colonel-in-chief, right? She always will be.”

Charles’ former butler Grant Harrold noted in a February 2020 documentary that Harry reminded Elizabeth of her husband, Prince Philip, who died in April 2021 at age 99.

“[He has] that wonderful, let’s say, the kind of glint in his eye,” Harrold explained at the time.

The monarch also had a sweet bond with Harry and Meghan’s son, Archie, 3. To celebrate the toddler’s birthday in May 2021, she sent him “presents and a card” and called him via Zoom, a source exclusively told Us Weekly. “Seeing her great-grandson’s face always brightens up her day!”

Being away from the little one was difficult for Elizabeth after his parents moved to Canada in January 2020, then America two months later. “The queen has FaceTime calls with Archie, but it’s not the same,” another source told Us in February 2021. “[She is] desperate to give Archie a huge hug.”

Elizabeth reunited with Harry in April 2021 when he returned to England for Philip’s funeral. The pair reportedly had two private conversations during his visit.

Prince Harry’s Cutest Moments With the Queen Through the Years

Harry had a “very close relationship” with his late grandfather prior to his death, a third source exclusively told Us in April 2021. “Whilst they may not have been able to communicate during the final year or so of his life, Philip thought extremely fondly of his grandson and vice versa. … Harry feels guilty for not being there to say goodbye to Prince Philip in person.”

He wrote in a statement at the time: “My grandfather was a man of service, honor and great humor. He was authentically himself, with a seriously sharp wit, and could hold the attention of any room due to his charm — and also because you never knew what he might say next. He will be remembered as the longest reigning consort to the Monarch, a decorated serviceman, a Prince and a Duke. But to me, like many of you who have lost a loved one or grandparent over the pain of this past year, he was my grandpa: master of the barbecue, legend of banter, and cheeky right ‘til the end.”

When the Sussexes welcomed their daughter two months later, they named her in honor of the queen.

“Lili is named after her great-grandmother, Her Majesty The Queen, whose family nickname is Lilibet,” a June 2021 statement from the couple read. “Her middle name, Diana, was chosen to honor her beloved late grandmother, The Princess of Wales.”