The Repair Shop’s Will Kirk has opened up about the moment King Charles ‘choked up’ during filming as he praised the ‘approachable’ monarch.

The furniture restorer, 37, was part of a team of four experts in Lee-on-the-Solent, Hampshire, who helped restore two artefacts for the King in a special hour-long episode of the BBC programme which aired last week.

Charles, 73, who was still the Prince of Wales at the time of filming, entrusted the experts with a piece of Wemyss Ware pottery made for Queen Victoria’s Diamond Jubilee and an 18th century clock in August 2021.

Speaking to Hello! magazine, Will revealed that the King appeared to fight back tears on set after seeing the restored pottery for the first time.

Describing how Charles had waited six months to see the priceless antiques again, Will said: ‘When Kirsten fixed the ceramic for him, he looked kind of choked up. 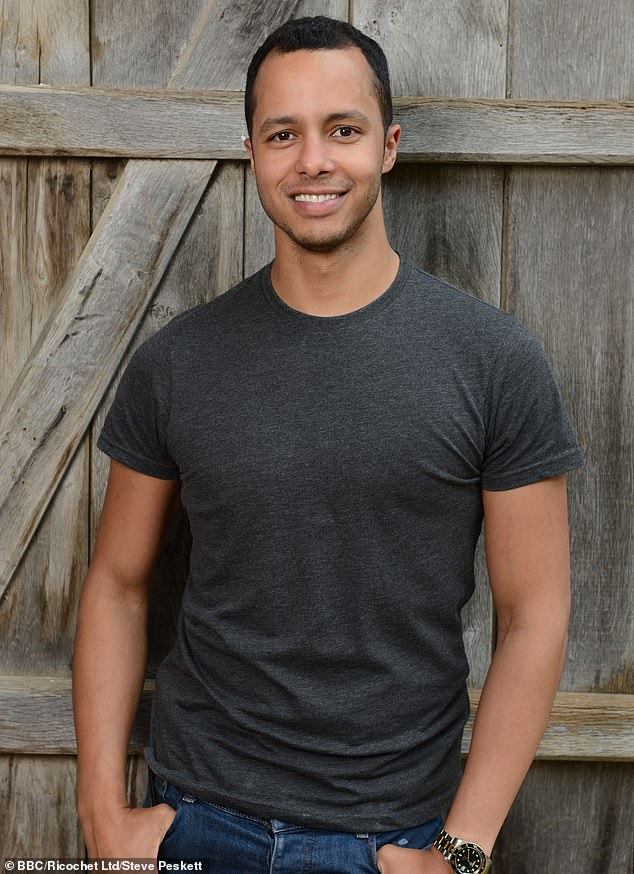 Furniture restorer Will Kirk, 37, was part of a team of four who helped restore two artefacts for the King earlier this year. The Repair Shop star branded the monarch ‘nice and approachable’ 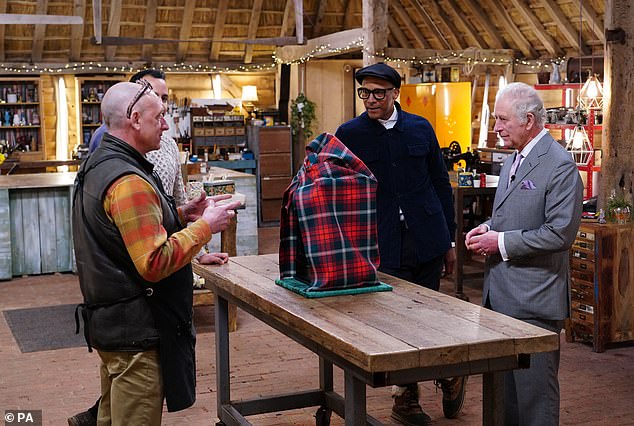 ‘He came across as a really approachable, nice person. You kind of forget who you’re talking to after a while and I think that’s why Jay was very hands-on, you know, a slap on the back and everything else because you forget that he is the king and that’s just a reflection of how he makes people feel.’

At the beginning of episode, the King explained how the ceramic urn – which dates back to 1897 – had been knocked over when someone was opening a window.

Describing how the accident had cause the base to snap off, the monarch joked: ‘They didn’t own up.’

Laying eyes on the restored piece for the first time in March this year, Charles appeared to tear up on screen and appeared visibly emotional as he inspected it further. 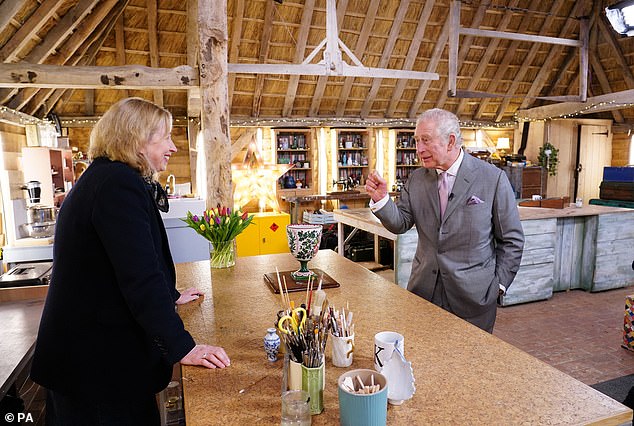 Furniture restorer Will Kirk says Charles ‘choked up’ after seeing his restored piece of Wemyss Ware pottery made for Queen Victoria’s Diamond Jubilee for the first time. The King told ceramics expert Kirsten Ramsay: ‘That is fantastic. It really is. How you do it, I don’t know.’ 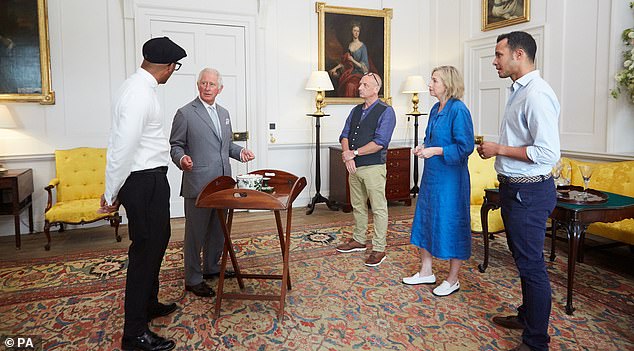 The King explained how the 1897 piece was knocked over when someone went to open a window. Describing how the accident had cause the base to snap off, the monarch joked: ‘They didn’t own up.’

Examining every corner of the urn, he added: ‘I would never have believed that. I really wouldn’t. I was thinking as I was coming “I bet she hasn’t managed it.”‘

‘It’s my favourite, I have been collecting these for years, Wemyss Ware, utterly wonderful. I’m thrilled I promise you. Now you can all get back to what you’re meant to be doing rather than me getting in the way, so thank you.’

In his first meeting with The Repair Shop team, Charles opened up about clocks being the ‘heartbeat of the home’, which is why he especially wanted to get his antique fixed.

He continued: ‘To me I just love the sound, the tick-tock but also if they chime, that’s why I love grandfather clocks. 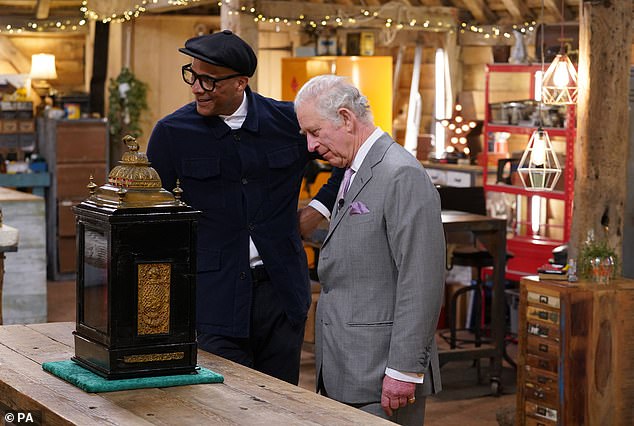 The King looked emotional after hearing his 18th century clock chime again. At the beginning of the episode, the royal described clocks as the ‘heartbeat of the home’ 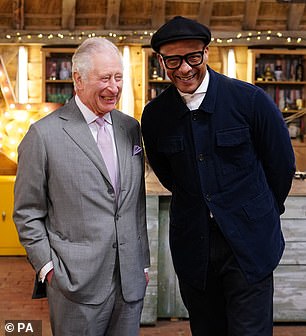 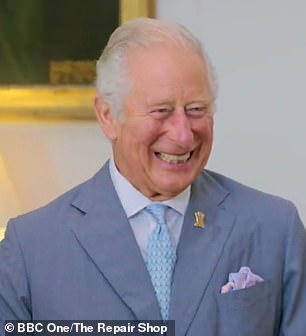 ‘I find it rather reassuring in a funny way and they become really special parts of the house… the beating heart of it. So that’s why they matter to me.

‘I’m afraid it is something I learnt from my grandmother, she had great fun putting a few together and trying to get them to chime at the same time in the dining room, which made it very enjoyable because everybody had to stop talking.’

As he entered The Repair Shop barn, Charles asked horologist Steve Fletcher: ‘Have you got the bells working again? The suspense is killing me.’

Following the uncovering, the royal said: ‘Oh my, look at that you see. Fantastic. It just shows what love, care and attention does. Marvellous. 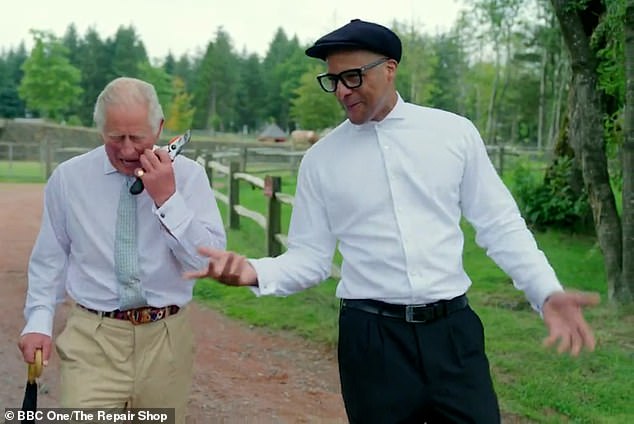 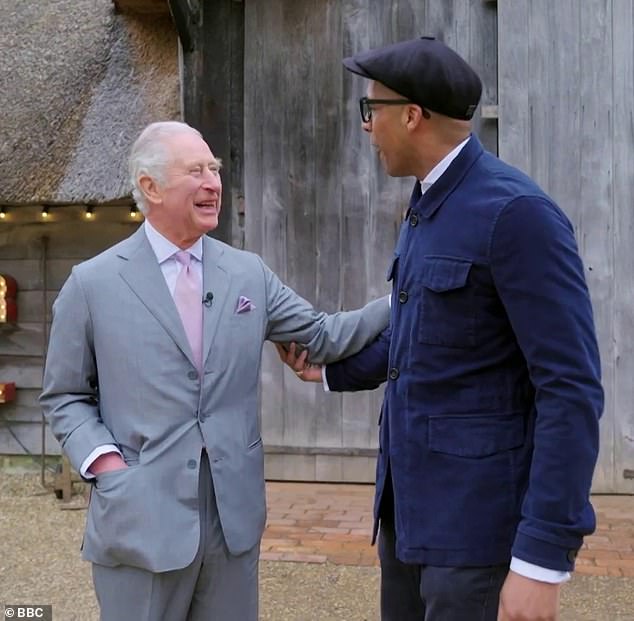 The monarch (pictured left with host Jay Blades) told the experts: ‘I am so grateful to you.’

During the hour-long episode as part of the BBC ‘s centenary celebrations, Charles, 73, who was still the Prince of Wales at the time of filming in August 2021, turned to the experts for help restoring a piece of pottery made for Queen Victoria’s Diamond Jubilee and an 18th century clock. Pictured, a viewer’s reaction to the programme

‘Having seen what it was like I can’t thank you enough, it really is wonderful. It will look really special back in Dumfries House.’

After the pendulum was swung in order to hear the clock’s tick tock, Charles glanced at his wristwatch to compare the time, saying: ‘Sorry, just checking.’

When Jay asked if he was happy about the restorations, Charles added: ‘Oh God yes. I am so grateful to you.’

King Charles and Jay Blades were dubbed an ‘unlikely duo act’ by thrilled viewers who joked that Ant and Dec needed to ‘watch out’.

During one light-hearted moment after viewing the King’s two products, Jay told the monarch: ‘We’re going to take these items to take a better look at them, and maybe you might join us at the barn.’

‘I’ve got a barn, you’ve got a barn,’ Charles joked. ‘We can have a barn dance.’ Blades cheekily said: ‘I’ll put the kettle on,’ to which the King replied: ‘Oh, will you?’

Nick Cordero Is ‘Fighting for His Life’ After Coronavirus Condition ‘Got Very Bad,’ Wife Says