A little girl who was anxious to meet the new monarch gleefully gave Queen Consort Camilla a bunch of daffodils – before surprising her with a handshake.

The sweet schoolgirl met the King and Queen at Llandaff Cathedral in Cardiff, where she was keen to welcome them to Wales with a bunch of daffodils, the national flower. 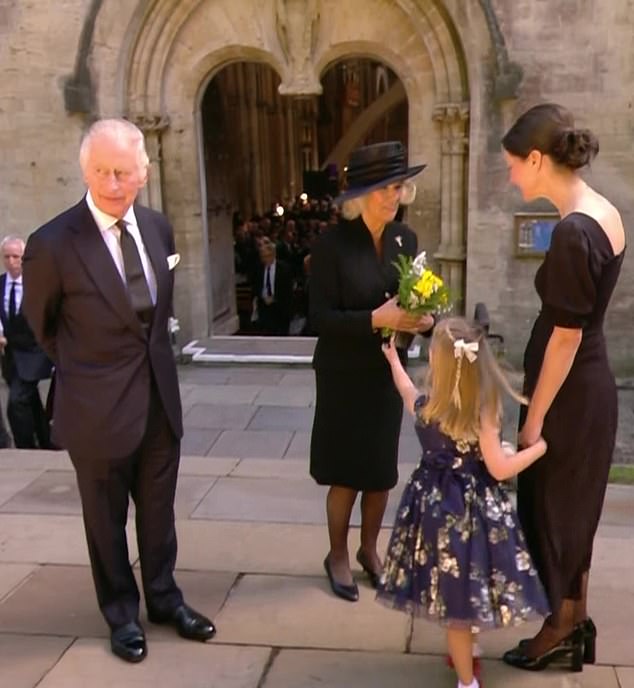 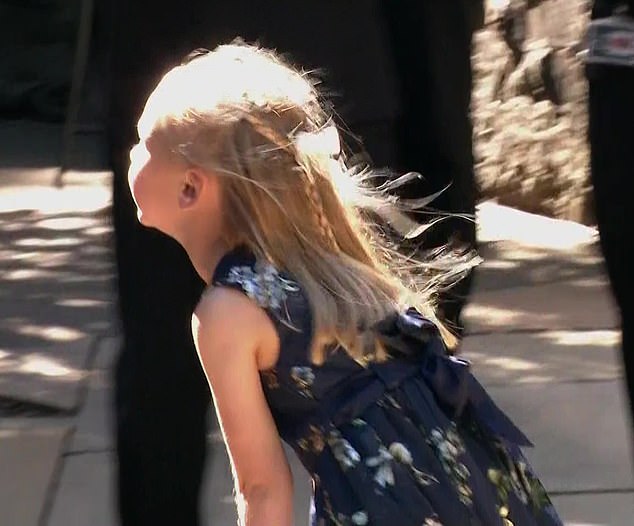 The sweet little girl appeared nervous and coy after handing over the gift to the new King and Queen, who were on their first visit to Wales since King Charles acceded the throne

Keen to get a piece of the action, the little girl reached up for the Queen Consort’s hand to shake it herself – at which point Camilla bent down to speak with her.

Meanwhile the new monarch stood with his hands behuing his back and looked around as his wife spoke with the young well-wisher.

But King Charles, who has five young grandchildren of his own, appeared to see the funny side and laughed with the girl’s mother and Camilla as she ran between the royals.

Today marked King Charles’s first visit to Wales since he became the monarch, after previously serving as Prince of Wales for 53 years.

He and Queen Consort Camilla were welcomed with cannon fire and cheers as they arrived in the nation.

The royal couple landed in Cardiff Airport at approximately 11.15am before getting into the waiting Royal limousine to take him to Llandaff Cathedral for a service of prayer and reflection for the late Queen.

Cheers from the thronged well-wishers on his route to the cathedral turned to full-throated screams as the King’s gleaming maroon Rolls-Royce swept through the city. 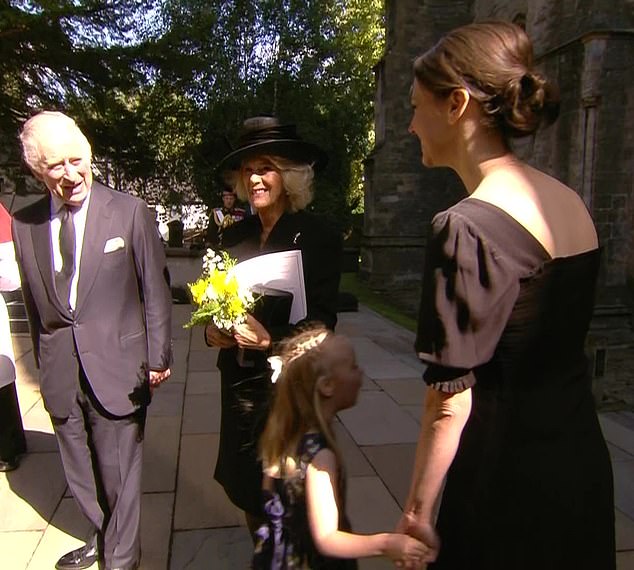 King Charles smiled and appeared to see the funny side as the young girl retreated to her mother, holding her hand 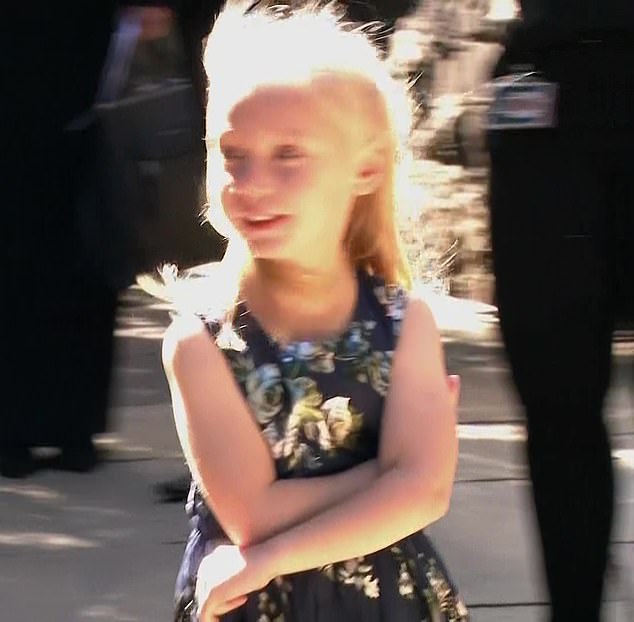 Camilla’s biggest fan! The young girl appeared coy after meeting the Queen and passing on her gift

On arrival at the cathedral, His Majesty was warmly greeted by Welsh first minister Mark Drakeford and faith leaders before being ushered inside.

The congregation, which included Prime Minister Liz Truss and Secretary of State for Wales Robert Buckland, sang Welsh hymns including the much-loved Guide Me O Thou Great Redeemer.

The Archbishop of Wales, the Right Reverend Andrew John, paid tribute to the Queen, saying how she ‘had the ability to relate to the man or woman on the Clapham Omnibus, or here, the Merthyr Tydfil Omnibus’.

The service finished with a rendition of the national anthem, God Save The King, before Charles was escorted to sign the visitors’ book.

The Royal connection to Wales is strong, with Charles having been invested as Prince of Wales in 1969, whilst his mother the Queen will be buried with her Welsh gold wedding ring – made so she would ‘always carry a piece of Wales’ with her.

$20b budget boost sets up election pitch on help to households