From bold Barbie-inspired numbers to form-fitting neons and VERY short and gaudy frocks: The best and worst celebrity fashion trackside at the 2022 Melbourne Cup

Stylish punters and celebrities have flocked to Flemington for this year’s Melbourne Cup and while many nailed the brief, the fashions on the field were as slippery as the waterlogged track with many A-listers missing the mark in the birdcage.

Among those was Nadia Fairfax who stepped out in a long-sleeved kimono-inspired get-up that swamped her small frame and resembled a bathrobe.

The former gymnast turned fashion blogger paired the short, quirky dress with gold accessories and a nude makeup look as she smiled for cameras at the Lexus marquee on Tuesday morning.

Nadia Fairfax (left) stepped out in a long-sleeved kimono-inspired get-up that swamped her small frame and resembled a bathrobe. Former Miss Universe Tegan Martin (centre) and television presenter Caty Price missed the mark with their attempts at ‘Barbie-core’ fashion landing both in the ‘worst dressed’ category 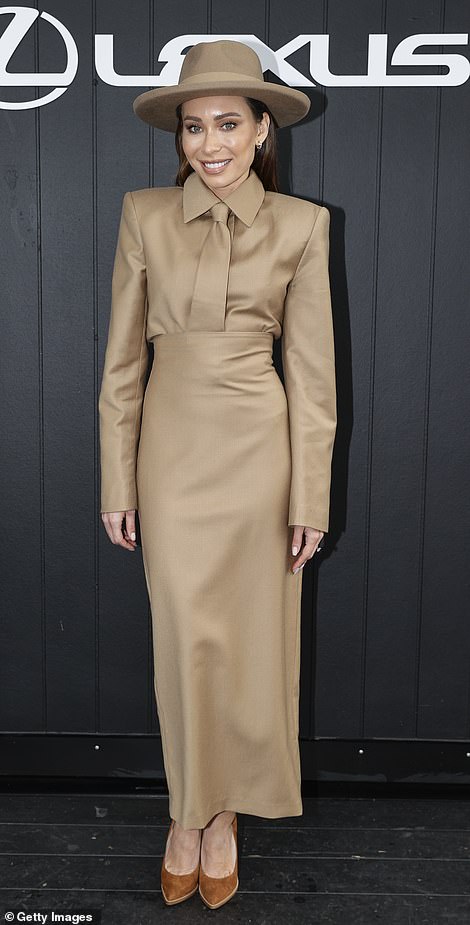 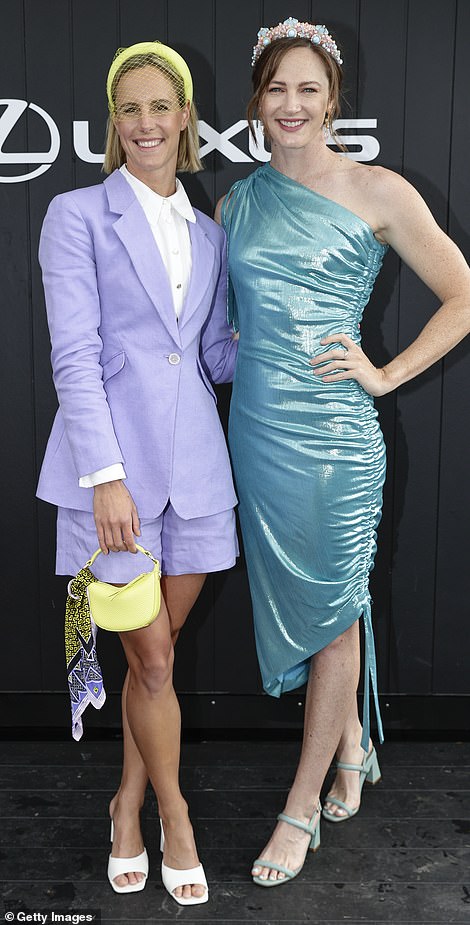 Melissa Leong also raised eyebrows with her risky yet edgy look – an oversized satin-look power suit in blush with dramatic black cuffs, which she paired with a white button-up shirt.

The MasterChef Australia judge hid her short locks under a noughties-era black patent-leather hat which featured an explosion of pink gauze and flowers from the side to tie it in with the rest of the outfit.

Former Miss Universe Tegan Martin opted for an equally risky look with a mini dress by Rebecca Vallance. While the colour flattered her features, the uber short design overwhelmed the style icon’s petit frame and tested dress codes with the length.

Caty Price also missed the mark as she attempted to jump on the Barbie Core band wagon, stepping out in a crumpled knee-length pink gown.

The dress failed to flatter the blonde’s figure with its huge shoulder puffs and gaping sleeves. She wore the gown with her blonde tresses stuck down at the roots, and cute nude heels which failed to stand out against the vivid hue of the frock.

Natalie Hunter also made a wrong turn when dressing for the carnival by choosing to don an oppressive purple skirt suit, with a sharp collar and matching fascinator.

The blunt look made the usually well-dressed blonde look like she was ready to help guests to their seats on the next flight out of Melbourne, instead of attending the highlight of Melbourne’s spring carnival.

Celebrity Stylist Suzy Eskander chose a risque eye-catching body con dress by Loewe which managed to shock for all of the wrong reasons.

The cream dress featured hands and arms covering the mother-of-three’s breasts and groin, and earned her a spot alongside the worst dressed women of the carnival.

But the show stopping outfits weren’t all for the wrong reasons – with some A-listers absolutely nailing their look on the day.

Among them the always stylish Bec Judd, and red-headed glamour Jules Robinson who both showed exactly how the season’s ‘pop of colour’ trend will work for them.

Olivia Molly Rogers also had heads turning for all of the right reasons with her classic tea-length Oglia Loro Couture gown and a custom made headpiece by Ezaraj. The former Miss Universe Australia and mental health advocate finished off her look with matching shoes and an oversized floral clutch.

But the show stopping outfits weren’t all for the wrong reasons – with some A-listers absolutely nailing their look on the day. (L-R: Demi Brereton in a floral Olgaberg number, Olivia Molly Rogers in Oglia Loro Couture and Delta Goodrem in Dolce & Gabbana)

Brooke Jowett looked demure as she stepped out in a beautiful floral gown which she paired with a lavender headband, white mini bag and matching heels while Kate Waterhouse narrowly scraped into the pool of best dressed celebs in head-to-toe Gucci.

The blonde beauty wore a pink satin tea-length gown which showed off her incredible figure, accessorising with matching shoes and a divine candy-pink mini-bag.

The fashion writer tossed her hair up in a stylish up-do, finishing off the look with bejewelled tiara.

Demi Brereton looked beautiful in her figure-hugging floral gown by Olgaberg which she paired with black strappy heels and a signature splash of red for the clutch and hat.

While Delta Goodrem was radiant as she arrived trackside in Dolce & Gabbana, paired with black-bowed heels and lace gloves.

While, Brooke Jowett (pictured left) looked demure as she stepped out in a beautiful floral gown which she paired with a lavender headband, white mini bag and matching heels, Amy Pejkovic (centre) donned a playful floral number and Kate Waterhouse (right) stunned in head-to-toe Gucci

Amy Pejkovic donned a playful floral number that earned her the title of one of the best dressed trackside, the model wore the short dress over a long-sleeved white shirt and added pink point-toe heels for a splash of colour.

Simone Holtznagel rocked a neon orange Alex Perry creation and matching hat, earning herself a place at the top of fashions on the field.

It wasn’t just the women making heads turn – with some of Australia’s most loved male celebrities rising to the occasion, for better or worse.

Former Masterchef favourite Andy Allen shocked in his homely potatoesque suit. He was pictured at the event next to long-time friend and fellow celebrity chef who looked dapper in his navy blue suit – paired with a bright, floral tie which was perfectly placed for the spring carnival.

Ciarran Stott looked like a misplaced Sherlock Holmes as he posed with one tattooed hand wedged into his dark brown trench coat.

The former Bachelor in Paradise star wore a grey vest and white dress shirt under the long coat, finishing off the look with a very festive tie.

The jacket was worn over grey vest, white shirt and festive tie, while the former Bachelor in Paradise star

While Christian Wilkinson looked stunning in a mint green suit, coupled with a red bow and tiara for the big day.

Strip club shut down after dancers ‘fleeced drunk customer out of £50,000’