TikTok-ready hits and remixes of pop classics have dominated the list of the top 50 most-played songs on Australian radio in 2022, as local artists continue to struggle for airtime on commercial networks.

The most-played song on Australian radio in 2022 was Harry Styles’ As It Was, a consistent favourite on TikTok since its release in April. 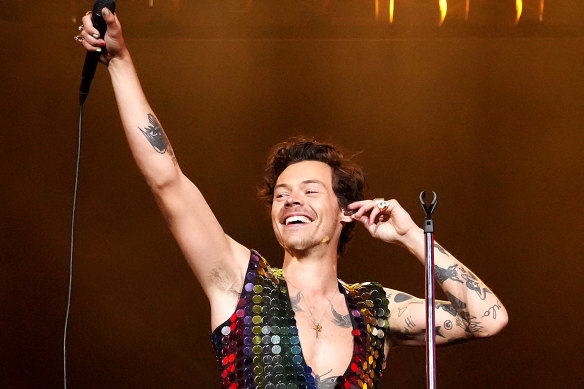 Harry Styles, whose song As It Was was the most-played song on Australian radio in 2022. Credit:Getty

Just eight of the 50 most-played songs on Australian radio were by Australian artists, down from 11 in the top 50 in 2021.

The highest-ranking Australian song was Vance Joy’s Clarity, which just snuck into the top 10 with 9,574 plays. The Kid Laroi features twice, first with Justin Bieber on Stay (16th) and Thousand Miles (27th), while Love Tonight by Melbourne duo SHOUSE featured at number 30 more than five years after the house anthem was first released.

“Certainly, the view among radio people that I know is that it’s getting more conservative, more safe,” she said. “Radios are choosing to play just the big American Top 40 songs, and they’re not really looking internally.”

But Nic Kelly, host of Summer Nights on the HIIT network, said commercial radio playlists were completely based on listener feedback.

“ I think it’s wrong to say that Australian commercial radio doesn’t care about Australian music. What it cares about is what listeners want to hear,” he said. “They just want to hear songs that they like, and I don’t think they care where it comes from.”

Kelly said songs such as Latto’s Big Energy (a re-work of Mariah Carey’s Fantasy) and Elton John and Dua Lipa’s Cold Heart (which samples Elton’s own Rocketman) were examples of radio’s trend towards nostalgia, comfort and familiarity in the past five years.

“It’s the whole concept of when you turn the radio on you know the song,” he said. “What we saw when the pandemic started was a very clear swing to nostalgia, and that has lingered and remained.

“TikTok was providing new avenues for older music to get heard again, and that interpolation thing just became such a trend that permeated into radio.”

With TikTok becoming an important vehicle for artists and labels to promote their music, LeFevre said songwriters and production teams were beginning to specialise in writing songs that would “blow up” on the platform.

“You can definitely hear the influence of TikTok in a lot of the hooks and melodies that are happening, these deliberately short hooks that might involve some fun words to say … you can just see they’ve been written with the intention of trying to become a trend on TikTok,” she said.

Another notable influence on radio in the last five years has been the influence of streaming services like Spotify and what LeFevre calls “passive listening”, where listeners might not necessarily know the artists behind a song even though they might feature prominently in one of their curated playlists.

“I don’t think [many] people would know Following the Sun by Super-Hi and Neeka, but that probably started in that online space and then filtered across into playlists and onto radio,” she said. “There’s a lot of dance-pop… it’s something very simple to put on in the background and makes you happy, makes you feel good.”

Last month Spotify released its own list of the most-streamed songs in Australia in 2022. It also had As It Was coming in at number one, with Heat Waves by Glass Animals and the The Kid Laroi’s Stay second and third.

How celebrities are enjoying Super Bowl 2021 from home