Much of Australia’s success in containing COVID-19 has been due to politicians heeding the science. It has proven to be an effective model. For those advocating stronger action on climate change, the pandemic lessons must trigger some frustration. Far from being led by the science, Australia’s climate debate has been mired for years in political wrangling. It has proven to be a very ineffective model.

That is, until someone finally got the politics right. The NSW government has shown the way, last week passing laws to deliver 12 gigawatts of clean energy and two gigawatts of energy storage in the state over the next decade. As NSW Energy Minister Matt Kean explained: "What’s different this time is we had a relentless focus on delivering cheap energy. It was all about the economics."

It worked. Despite some pushback from opponents within his own party; his federal Coalition counterpart, Angus Taylor; and big energy corporations, Mr Kean managed to harness the backing of the Liberals, the Nationals, the Labor opposition, the Greens and most other crossbenchers. 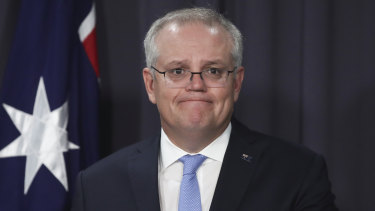 The states are moving ahead of Scott Morrison on climate policy.Credit:Alex Ellinghausen

There are lessons to be learnt. In Australia, despite the existential threat of climate change, it has been incredibly difficult for those pushing for greater action to translate a science-led argument into a groundswell of support for an acceleration to a low-carbon economy. It has too often been possible for climate sceptics to block progress by muddying the waters on the science.

Victoria also took big steps last week, although the state’s broader support for progressive policies, and Labor’s dominance in the state, made it an easier sell. State Energy Minister Lily D’Ambrosio secured $540 million in Victoria’s budget for six renewable energy zones, and nearly $800 million for energy efficiency programs, giving further proof of the state government’s commitment to reaching its renewable energy target of 50 per cent by 2030.

Together, Victoria and NSW are moving well ahead of the federal government, which is still politically crippled on climate policy by its previous fierce internal battles. This is putting Prime Minister Scott Morrison in the uncomfortable position of not only being left behind at a national level, but also by many of Australia’s allies. In recent weeks – most noticeably since Joe Biden became President-elect in the United States – Mr Morrison’s language on climate change has eased, with an indication that Australia wants to "reach net zero emissions as quickly as possible".

But it is actions that matter, and the Prime Minister is not the only one being shown up by the states. Federal Opposition Leader Anthony Albanese is also struggling to put forward a credible climate policy, and the recent departure of Joel Fitzgibbon from Labor’s frontbench has put on display the cracks within the party.

If there is one thing the global pandemic has made clear, it’s that potential threats do turn into real threats with enormous consequences. The science of climate change leaves us in no doubt of the potential and eventual real threat from not acting quickly enough to slow the heating of the planet.

Whether people’s experience of the pandemic will make sceptics more amenable to the science is unclear. What the states have shown, though, is that despite previous acrimonious debates big changes are still possible if political leaders make the argument in a way aimed at building support across the political spectrum, not merely as a means of placating those with the most extreme views.

25 Memes That Will Make Singles Feel Seen On Valentine's Day