You will remember the silence, if you were in Edinburgh or London these past ten days. The hush that lay across the two great cities as if they had been hypnotised by grief.

From the media pen outside Buckingham Palace I watched the Queen’s coffin process past thousands of mourners, and the only sounds were the muffled bass drum, the clinking of horses’ bridles and the remorseless slow-march tramp of military boots.

An autumn breeze stirred the branches of the London plane trees along The Mall. The first dead leaves fluttered on to the famous red tarmac.

Over and over we heard mourners say the same thing, with slight variations: ‘She had the right values’; ‘she was the true leader of the nation’; ‘saying goodbye was the right thing to do.’

Packed into a row of makeshift studios under the trees, TV commentators from around the world forgot their next lines as producers, technicians and camera operators paused and just stared.

Veteran witnesses of wars, famines, floods and pestilence of every kind all became like statues as the coffin of a very old, very tired, very beloved woman passed before their world-weary eyes on its way to lie in state at Westminster Hall.

Tomorrow will see the final grand acts in the world’s long goodbye to Elizabeth II.

In the pre-dawn twilight, the last of the miles-long line of mourners will file respectfully through Westminster Hall.

The King’s Guard that has kept vigil for five long days will step down from their posts and the Queen’s coffin will be prepared for its journey to Westminster Abbey.

There, a congregation of world leaders and Commonwealth dignitaries will be joined by politicians, religious leaders, representatives of the Queen’s patronages and those who gave exceptional service during the Covid pandemic.

It is already being called the greatest ever diplomatic gathering, not to mention a supreme example of the seating planners’ art.

What’s almost certain is that it will have the largest TV audience in the world. Ever.

Much of that audience will be in the United States, a country watching with intense curiosity as its old colonial master and best ally undergoes a near-simultaneous change of Prime Minister and Sovereign.

The special relationship will survive but will be scrutinised anew as a Queen who was served by Winston Churchill is replaced by a King with very modern views on politically sensitive subjects.

The United States has been my home for more than a decade, so to be plunged back into England in mourning is a double shock.

Yet I felt immediately back at home among the crowds surrounding Buckingham Palace. 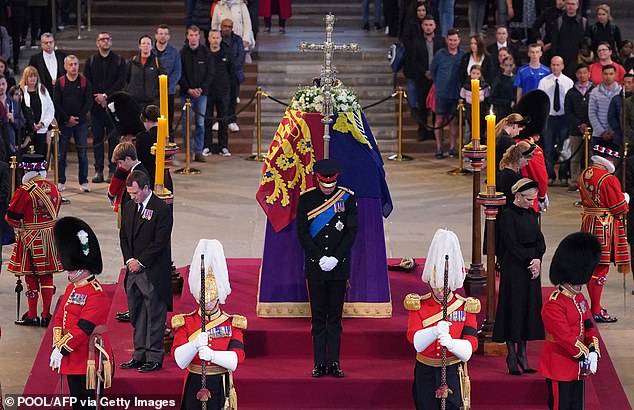 The familiar streets and paths, which I had trodden with light and heavy heart in my years as a royal private secretary, were thronged with people who had come to mourn but found themselves instead among new friends.

Such is the unifying magic of Elizabeth II, whose power to bring her people together was never stronger than when she was no longer here to see it.

That unity will be on view again after the funeral, when the coffin is transferred to the State Hearse at Wellington Arch.

It then takes a slow drive along neighbourhood roads to Windsor Castle, making its approach up the Long Walk so that even more crowds can participate in the historic closing moments of the era of a queen we will surely come to remember as Elizabeth the Great.

At the end of a long day, in a private family service, Her Majesty will finally be buried in the King George VI Memorial Chapel where she will rest for ever alongside the remains of her beloved parents, sister and husband.

And there we will leave her. All our farewells will be complete, final tears shed and prayers of grief and gratitude offered up.

Elizabeth’s life is over, but ours will continue, released from the freezeframe unworldliness of the past ten days.

Our humdrum existence, our petty bickerings and mundane concerns will return, in all their reassuring and frustrating familiarity.

The Monarchy will sail on, a new hand at the helm and a reshuffling of the officers on the bridge, but still recognisably the same vessel that has carried our constitution, our very national identity, through good times and bad for a thousand years.

Yet something will have changed. 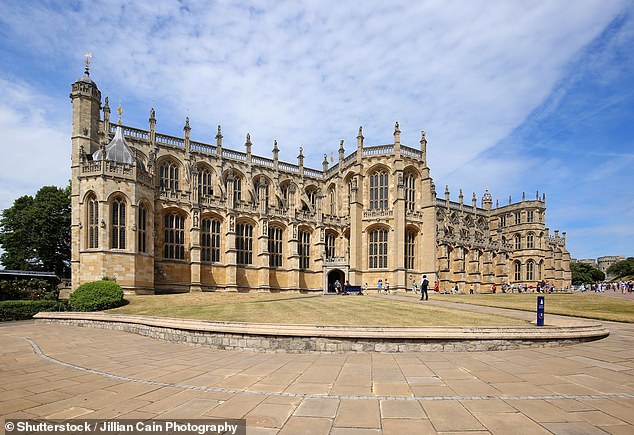 At the end of a long day, in a private family service, Her Majesty will finally be buried in the King George VI Memorial Chapel where she will rest for ever alongside the remains of her beloved parents, sister and husband.

None of us who have lived through the golden twilight of the Queen’s reign and witnessed its inevitable, yet still unexpected, final closing will ever be quite the same again.

We will have tasted a unique moment of unity and we’ll know at some deep level that our human hunger for fellowship and belonging can be satisfied, however fleetingly.

In a world that seems ever more divided, what more precious final gifts could our Queen have left us? More specifically, what greater gift could she leave her son and heir whose need for unified public endorsement is being so generously fulfilled?

Of course, these gifts have always been available but it has taken the Queen’s death to remind us how closely they lie within reach.

Yet, like a rainbow over Windsor Castle, the more we try to grasp them the further they retreat.

When Tuesday dawns and we wake to a world from which she has finally departed, our fear will be that once again we are on our own, as separate and isolated as ever, uncomforted in a loss that in some ways will linger for the rest of our lives.

But think again about how we came together these past few days.

Over and over we heard ordinary mourners say the same thing, with slight variations: ‘She had the right values’; ‘she was the true leader of the nation’; ‘saying goodbye was the right thing to do.’

It was as if we instinctively knew Elizabeth represented far more than just the House of Windsor – a notoriously flawed dynasty, for all its good intentions – and more, too, than the British nation and her Commonwealth realms – no less flawed for all their beauty and potential.

Beyond these she personified a moral polarity, a cardinal point in a chaotic universe to which our own frail moral compasses returned.

The more exalted her earthly status, the more humbly she set about the duties we asked her to perform. 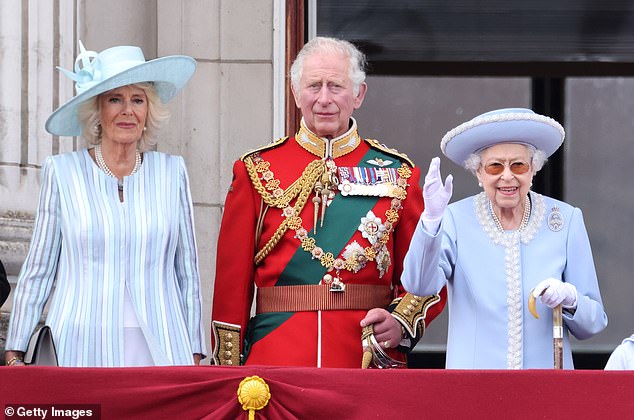 Finally, at her Platinum Jubilee, we witnessed the ultimate expression of her transformative power – a frail, elderly woman on whom we could already sense eternity’s tightening grip, yet from whom we had never felt such strength.

Finally, at her Platinum Jubilee, we witnessed the ultimate expression of her transformative power – a frail, elderly woman on whom we could already sense eternity’s tightening grip, yet from whom we had never felt such strength.

Strength to lighten a troubled nation’s spirits, renew our faith in ourselves, guide us through the changes she knew were to come.

Few of us are royal yet all of us can follow her on the narrow, twisting path of charity toward others and trust in God.

This is where the past week’s gifts of fellowship and belonging become real, and where also we can encourage each other with the fondly remembered words she used when we faced Covid isolation.

Not so much an epitaph, more a royal promise: ‘We will meet again.’

Patrick Jephson was equerry and private secretary to Diana, Princess of Wales, 1988-96.

Liberals wring their hands, but you SHOULD get life for killing cops