Writer and coach, 29, reveals she was told she’s ‘not truly black’ after writing a viral open letter blasting the ‘cult of wokeness’ and insisting she’s not oppressed by her skin colour

A writer and coach has revealed how she faced a backlash over a viral letter in which she said: ‘I’m not oppressed because I’m black’.

Africa Brooke, 29, who  lives in London, spoke to the Diary of a CEO host Steven Bartlett about her views on race, and what it really means to be oppressed for his popular podcast.

The writer and coach ‘specialises in helping people and groups with personal or professional challenges related to self-censorship and self-sabotage’, and has 229,000 followers on Instagram.

Last year, she wrote an open letter declaring she was ‘leaving the cult of wokeness’ that insists she will ‘forever be opressed because she’s black’, while others told her she’s not ‘truly black’. 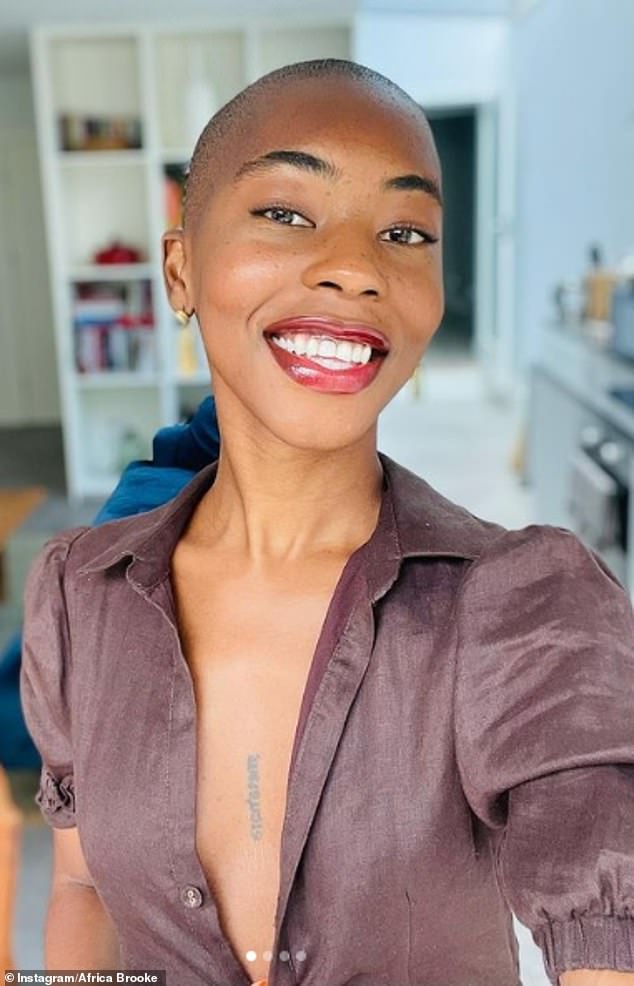 Africa Brooke, 29, who lives in London and was born in Zimbabwe, has described the backlash she received for an open letter blasting the ‘cult’ of wokeness, and insisting that she is not opressed because she’s black 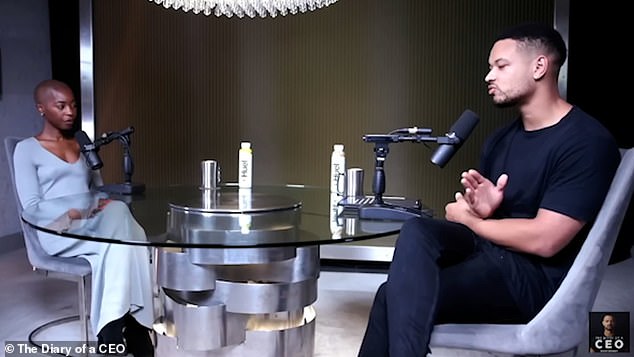 Africa spoke to the Diary of a CEO host Steven Bartlett about her views on race, and what it really means to be oppressed for his popular podcast

Africa, who was born in Zimbabwe, told Steve: ‘I’ve seen real oppression’, adding that she’s a ‘huge advocate’ against FGM.

FGM stands for female genital mutilation and happens in many African countries.

The barbaric procedure, that involves the removal of the clitoris, often without anesthetic and with dirty equipment is rife in communities that believe female sexuality is wrong.

Africa said ‘I said that I don’t feel oppressed as a black woman, and a lot of people didn’t agree with me, they didn’t like it.

‘Many people thought I was undermining black people and women. It’s something non-controversial, but is now seen as a controversial statement to make.

‘I was messaged, mainly by white people telling me that I am oppressed, but I wasn’t raised to be a victim and I refuse to be one. 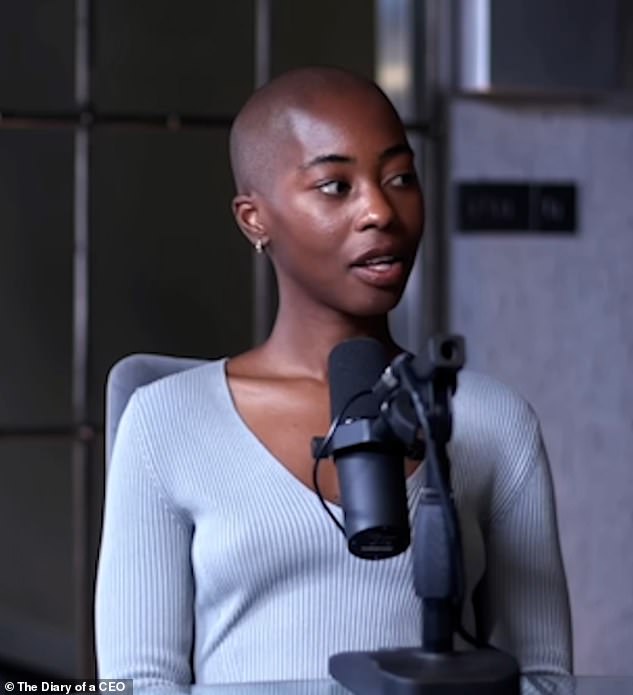 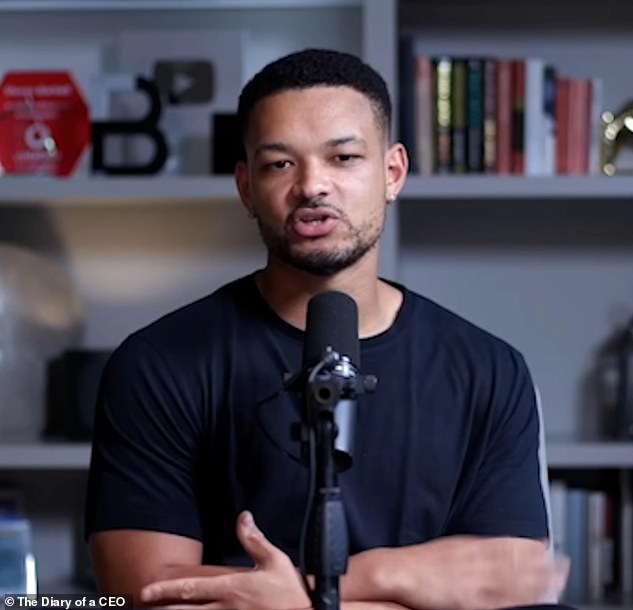 Dragons’ Den’s Steven Bartlett, agreed that labelling himself as a ‘disadvantaged person’ could have a negative impact on his confidence

‘Culturally or in my family home I have never for one second, apart from the moments I needed to misplace my rage, have seen myself as a victim.

‘Oppression is now being worn as an identity piece’: Africa’s open letter decrying the ‘cult of wokeness’

She said in the letter ‘If there’s one thing I’m NOT afraid of, it’s being ‘cancelled’.

​’If being cancelled means me living in integrity as a human being who thinks for themselves, CANCEL ME TODAY!

​’What I’m truly afraid of is existing in a world that forces me to submit to an ideology without question, otherwise I’m to be shamed (or pressured to shame myself) and cast out of the community.

​’A world that tells me that because I inhabit a black body; I will forever be oppressed and at the mercy of some omnipresent monster called “whiteness”.

​’That because of the colour of my skin; I am a victim of an inherently racist system by default – and me rejecting the narrative of oppression means that I am in fact, in denial. ‘How empowering!

​’You know, as someone that comes from Zimbabwe, a country where the general population is truly oppressed, it perplexes me that oppression is now being worn as an identity piece in most parts of the West, especially by those who claim to be “progressive”.

​’What I’m truly afraid of is existing in a world that forces me to consider the colour of my skin and my gender (and that of others) at every f****** turn, instead of living by Martin Luther King’s teachings and prioritising the content of mine and other people’s character.

​’I dread the prospect of a world where context, nuance, critical thinking, meritocracy, mathematics, science, and rationality are considered tools of ‘white supremacy’, and the rule is that you’re not allowed to question or argue this senseless statement – especially if you’re white.

​’A world that is conditioning you and I to believe that we will always be trapped in some weird hierarchy because of our race, our genitals, our physical abilities, our neurodiversity, our sexuality, and our politics.’

‘For me it’s not even a conscious decision. I don’t walk through the world thinking my skin color is a burden and that’s not the only truth.

‘Yes I am aware I have experienced things because of my skin colour, but I am a powerful being in a black body, and I should be able to claim that power.

‘People always want to hear the hardship stories when it comes to race. What if there isn’t one? When I get interviewed I get asked about the colour of my skin. Instead of being a “black entrepreneur”, why can’t I just be an entrepreneur?

Steve agreed with her sentiments, saying: ‘I’m sure I’ve walked into boardrooms in front of middle aged white men where my colour has had an impact on the outcome, either positively or negatively.

‘I’m sure there was prejudice against me, but it’s not my responsibility to cure it.’

He added that labelling himself as a ‘disadvantaged person’ could lead to ‘less confidence ‘ and ‘more pessimism’.

‘That could be more harmful than discrimination,’ he said. ‘On a day-to-day do I want to burden myself with a label that won’t serve me? Others can do as they wish.’

Africa added: ‘You can choose not to be oppressed and still fight for equality. I’m very fierce about this.’

She continued that we need to see more people from minorities, ‘positioned as powerful sovereign beings’.

‘It’s my responibilty to claim my power as an individual in a black body.’

‘I say, “No I’m not oppressed”. People don’t know what to do with you.

‘There’s a lot of moralism out there, people believe people that fit into this identity marker. They need to become champions for the oppressed black people, but they’ve become regressive in their quest to be progressive.’

Steve, who was born in Botswana, and moved to the UK at the age of two, said: ‘There’s an argument out there that you can’t tell a black person what racism is.

‘A lady argued with me saying: “White people can’t tell black people what racism is”. She abandoned truth, in this binary narrative, that white people can’t talk about racism – I’m half white so I can shapeshift.’

The letter received outrage, with some even labelling Africa a ‘white sympathiser’ among other things and not ‘truly black’. 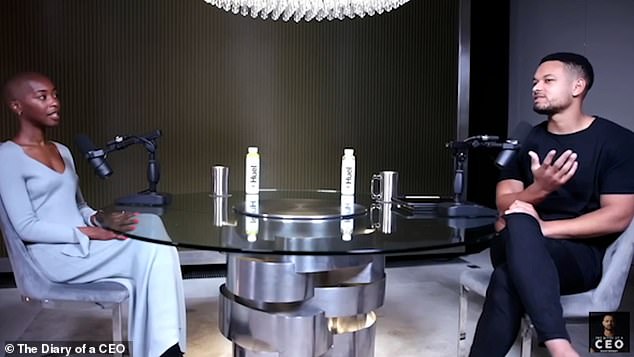 Steven and Africa both agree you can be a racial ally without being a victim – the pair acknowledged everyday racism, but say they refused to let their colur ‘be a burden’ 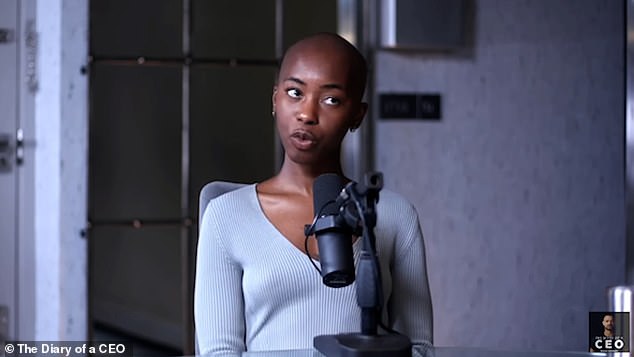 Many have praised the podcast, saying Africa’s attitude is ‘breath of fresh air’ despite claims that critics ‘didn’t like’ what she had to say about color

However, since the release of the podcast last week Africa has gained 10,000 Instagram followers and received praise from fans worldwide for her direct and intelligent approach to contemporary issues.

One YouTuber said ‘This is such a powerful interview. The way Africa is so unapologetic, honest and transparent with her views is a breath of fresh air in today’s climate.’

Another said ‘I don’t have a lot of female role models in my life…Until now! What a beautiful and aspirational woman!’

Joan Baez to Ailing John Prine: ‘Hello In There’