Ukrainian President Volodymyr Zelensky has called on China to join other nations in condemning Russia for waging war against his country amid signs that China is buying Russian oil in record volumes.

Zelensky told an Australian audience on Wednesday that he was doing everything he could to ensure Russia was isolated from other countries but he could see China was “balancing” its position. 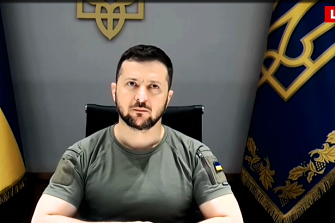 A screenshot of Ukrainian President Volodymyr Zelensky giving a virtual address to ANU’s Centre for European Studies on Wednesday.Credit:ANU

Telling thousands of students in an online address organised by the Australian National University that he was grateful for Australian support so far, Zelensky also emphasised the need for more practical support in a sign he wants more defence and humanitarian supplies on top of pledges worth $388 million in the 161 days since the February 24 invasion.

“[Russia] are powerful – they have more people, they have more weapons, they have nuclear weapons. It’s a struggle of tyranny against democracy, so you can’t stand aside if you support common principles with Ukraine,” he said.

“You can’t just sympathise, I will be frank. We thank you for your moral support but you also need to support us with deeds in order for us to have the opportunity to win. We need support with concrete actions.

“A lot of Australians are helping us a lot and render humanitarian assistance – please don’t forget about it, please continue.”

With China engaging in military exercises against Taiwan, an Australian student asked Zelensky if he believed it was possible to enlist support from China against Russia.

“We see that Russia is losing its economic allies – it is not very full-scale, but still, it loses it,” he replied.

“And I would like China to join the unified world position on the tyranny of Russia against Ukraine.

“As for now, China is balancing and indeed and has neutrality. I will be honest: this neutrality is better than if China would join Russia.

“I believe the people of China will do the prudent choice. It’s important for us that China will not help Russia. Some nations help the Russian Federation a little and they do not feel for themselves the influence this war has made on the whole world.”

The address drew an audience of 1300 in a Canberra theatre as well as 3500 viewers online.

Former foreign minister Julie Bishop, now ANU Chancellor, hosted 10 questions from students including one who asked whether Russia and Ukraine might ever mend their relations.

Zelensky said this was the “hardest question” because nobody in Ukraine wanted to have anything in common with a people who inflicted war crimes upon Ukraine, which meant repairing relations was up to the people of Russia.

With Labor foreign affairs assistant minister Tim Watts and Liberal foreign affairs spokesman Simon Birmingham in the audience, the Ukrainian leader rubbished the idea that Russian President Vladimir Putin would be interested in a settlement that could “save face” and end the war.

“The one who wants to save face doesn’t commit the hundreds and thousands of military crimes and crimes against humanity, doesn’t commit the massive executions of a peaceful population, doesn’t put them on their knees and kill them with a shot in their back,” he said.

Zelensky listed crimes including rape and torture and dismissed the idea of saving face for people who had committed those crimes.

ABC to air ‘Black Panther’ as tribute to Chadwick Boseman