Atlanta’s mascot, Freddie Falcon, bizarrely tried to fight a kid as it squared up to him after a tackle during a halftime pee wee game.

Although the mascots ultimately suffered a stunning defeat at the hands of the kids, it did not stop one giving it its all. 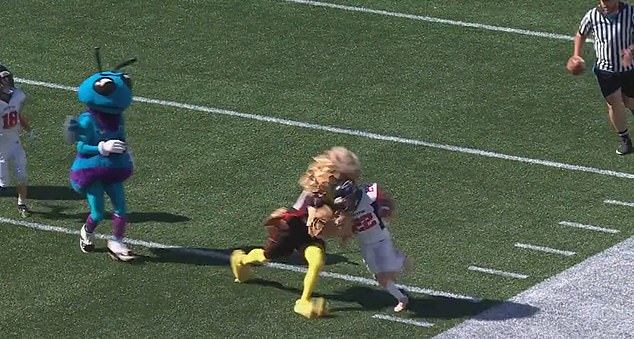 Atlanta’s mascot, Freddie Falcon, bizarrely tried to fight a kid after tackling him during a pee wee game at halftime of the Falcons’ 35-17 loss to the Cincinnati Bengals

Freddie Falcon could be seen sprinting after the kid before tackling him to the ground.

The player, clearly confused and riled up, slammed the football to the ground before getting back to his feet.

However, the mascot approached the player, seemingly squaring up and taunting him before shoving him.

The player stumbled before striking back, smacking the mascot in the face with the ball, which sparked a fight between the two as they began shoving each other back and forth. 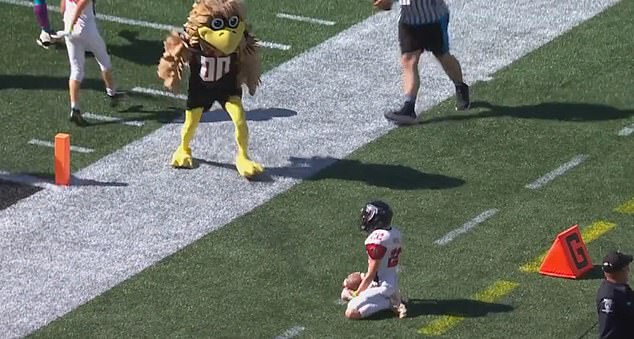 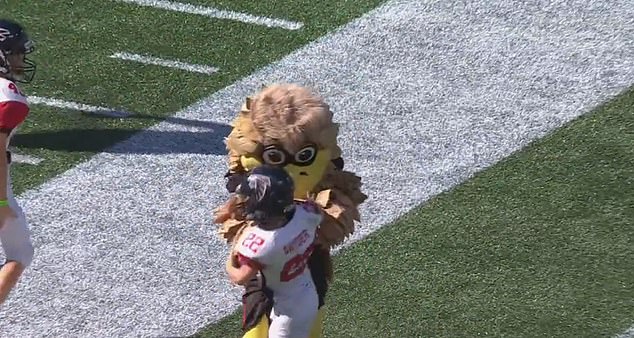 The mascot approached the player, squaring up and taunting him before shoving him

The kid’s teammates streamed on to the field to his defense and they surrounded the mascot before the referee rushed over to break up the chaos.

After the referee separated the furious players from the mascot, Freddie Falcon appeared to celebrate his hit as he ran away with his arm – or rather wing – in the air in triumph.

It is unclear whether it was a joke or whether Freddie Falcon was trying to get called up to play corner.

The Falcons suffered a brutal beating of their own as they were already 28-17 down at halftime and went on to lose 35-17 at the hands over Joe Burrow and Co. 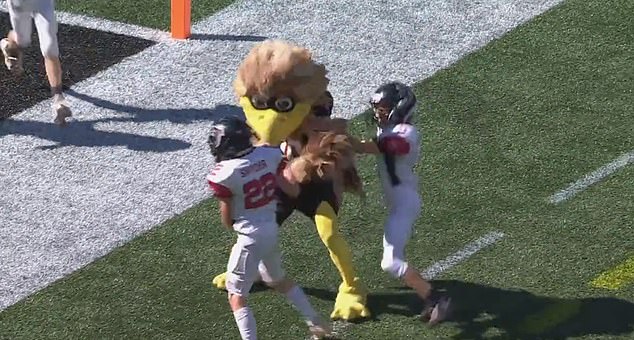 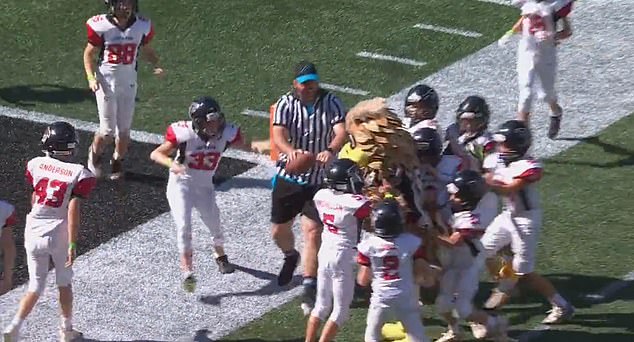 Burrow threw for 481 yards and three touchdowns as the Cincinnati Bengals jumped to a big lead and routed the visiting Falcons Sunday.

The Bengals (4-3), winners of four of their last five games, featured big plays to score touchdowns on their first four possessions and were never threatened.

Burrow connected with Tyler Boyd for a 60-yard strike and with Ja’Marr Chase for 32- and 41-yard scores in building a 28-7 lead with 49 seconds left in the first half, before the Falcons (3-4) recovered to score 10 points and trim the halftime deficit to 11. 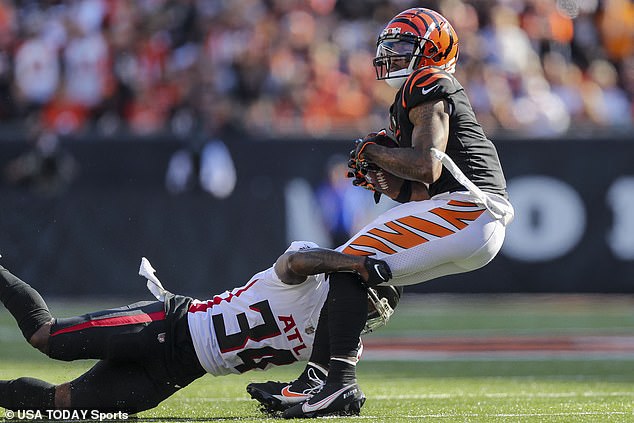 Boyd finished with eight receptions for a career-high 155 yards and Chase with eight more for 130 as the Bengals amassed 537 net yards to the Falcons’ 214. Tee Higgins added 93 yards receiving on five catches.

Cincinnati remained tied with the Baltimore Ravens atop the AFC North standings.

The Falcons, who entered the week ranked 27th in the NFL in allowing 385.2 yards per game, were further hindered when they lost starting cornerback A.J. Terrell to a hamstring injury in the first quarter.

Football Association to confirm lockdown changes as golf, tennis and swimming hit out at ‘counter-productive’ restrictions