REVEALED: Shocking footage shows Joe Marler called an opponent’s mother – who’s in hospital with cancer – a ‘f***ing w****’ – after the Harlequins and England star was only handed an initial two-week ban

The Harlequins prop received a six-week ban – four suspended, meaning it is just an initial ban of a fortnight – after being charged by rugby’s governing body, the RFU.

And video has emerged on social media where Marler’s disgraceful slur toward Bristol Bears forward Jake Heenan, which sparked a brawl between the players, was clearly audible. 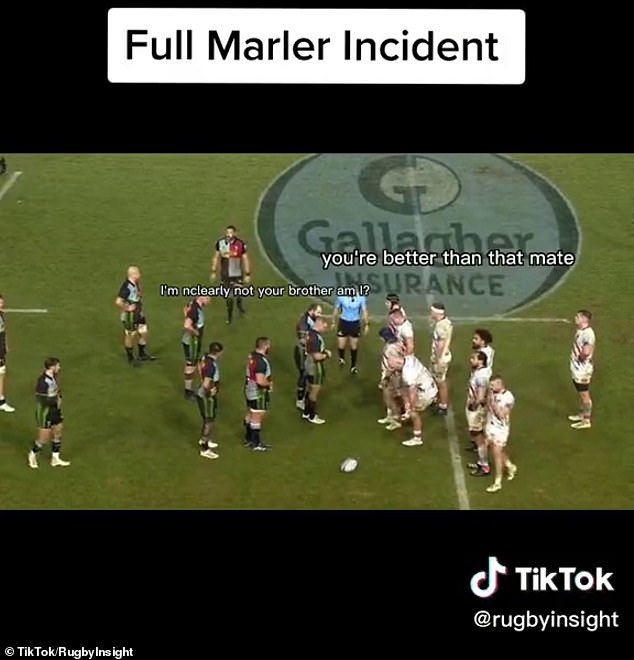 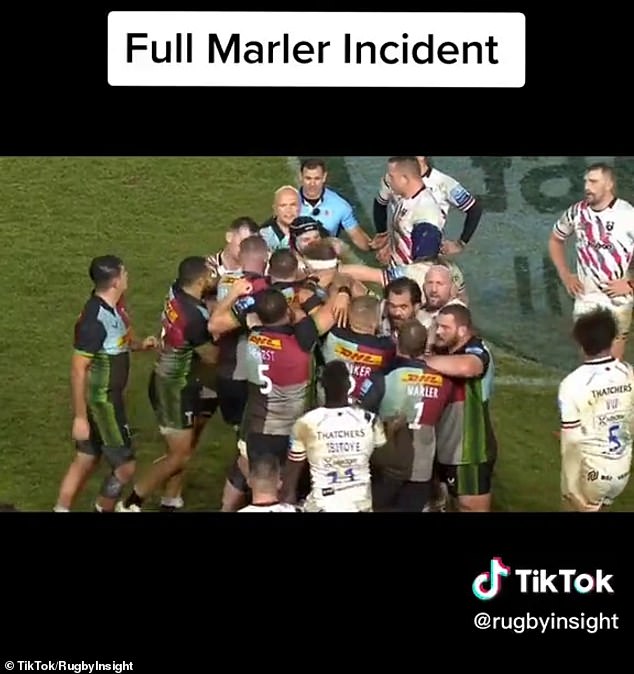 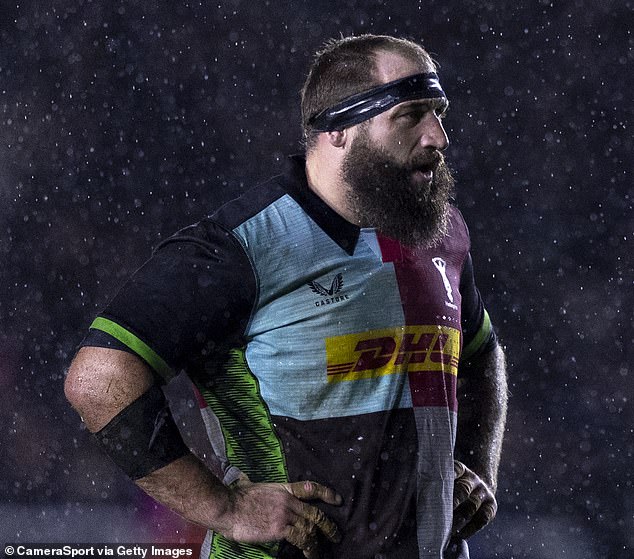 Experienced England international Joe Marler (above) has had a lucky escape after only receiving an initial two-week ban for insulting Heenan’s mother, who is in hospital with cancer

June 2009: Prior to becoming a senior professional, Marler was sent off in action for England’s Under-20 side in a meeting with Japan.

April and September 2011: Receives bans of two weeks and three weeks respectively for fighting and hitting an opponent on Premiership duty for Harlequins.

March 2016: Four years into his Test career with England, Marler causes outrage by calling Wales opponent Samson Lee ‘gypsy boy’ in a Six Nations match. He is banned for two weeks and fined £20,000.

April 2016: In his first match back after the Lee ban, Marler kicks Grenoble’s Arnaud Héguy in the head in a European Challenge Cup semi-final. Is banned for another two weeks.

June 2016: Refers to former Australia coach Bob Dwyer as a ‘w*****’ on Twitter. Receives a formal warning from his England rugby bosses.

September and October 2017: Squirts water at his England team-mate James Haskell in a clash between Harlequins and Wasps. Not banned on that occasion but is a month later for striking Will Rowlands.

January 2018: Another ban, this time for six weeks.

December 2022: Found guilty of conduct prejudicial to rugby after abusing Bristol’s Jake Heenan and making fun of his hospital-bound mum. Banned for an initial two weeks.

As the two prepared for a scrum before the end of the first half, Heenan asks: ‘Hey brother, you mad, eh?’

When Heenan says ‘You’re better than that, mate’, Marler further escalates the situation by repeating: ‘Your mother’s a w****’.

The New Zealander then said to referee Karl Dickson: ‘Karl, my mum’s in hospital with cancer.’

Dickson, who did not hear Marler’s comments but insisted to Heenan and Bristol captain Steve Luatua that Marler would be punished retrospectively if the comment was picked up over the various broadcast microphones.

Harlequins said: ‘Harlequins notes the result of Joe Marler’s disciplinary hearing on Friday evening and subsequent suspension. The club will make no further comment at this time and considers the matter closed.’

The punishment represents a lucky escape for Marler, whose  Six Nations hopes are still alive after his latest brush with controversy.

Marler accepted the charge of conduct prejudicial to rugby brought against him at an RFU disciplinary hearing on Friday night.

It decided he should be banned for six weeks in total but with four weeks suspended until the end of next season.

RFU panel chair Gareth Graham said: ‘The player accepted his conduct was prejudicial to the interests of the game.

‘As has been said by previous rugby disciplinary panels, rugby’s core values are not empty words or slogans which can be signed up to and then ignored.

‘They are not to be treated as useful bolt-ons dreamt up by a marketing team. They are integral to the game and are what make the game special.

‘The insulting and offensive comments made by the player were wholly inappropriate. Such comments should form no part of the modern game.’

Marler apologised to Heenan both online and in person for his comments, which he described on Twitter as ‘p*** poor.’

It means he will be able to be a part of England’s squad for the 2023 Six Nations, should be selected by new head coach Steve Borthwick. 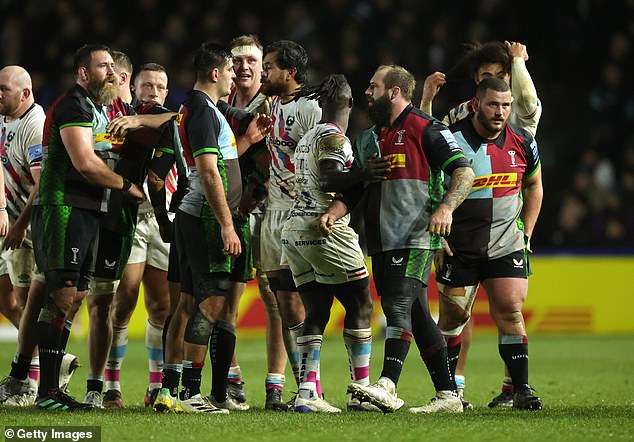 In 2016, Marler, 32, who has a poor disciplinary record, called Wales prop Samson Lee ‘gypsy boy’. While in 2020, was suspended for 10 weeks for grabbing another Wales player in Alun Wyn Jones by the testicles.

His poor record was taken into account by the RFU who were also aware of Marler’s apology to Heenan and his remorse at his actions.

Speaking before Marler’s hearing on Friday, Harlequins boss Tabai Matson said: ‘Clearly, he (Marler) is really apologetic. He didn’t know the full context of what he said. What he said was wrong.

‘He reached out to Jake and Jake replied and accepted his apology and then they had a good chat after that. He has been apologetic to us as well. He is annoyed that he has dragged the club into this kerfuffle. 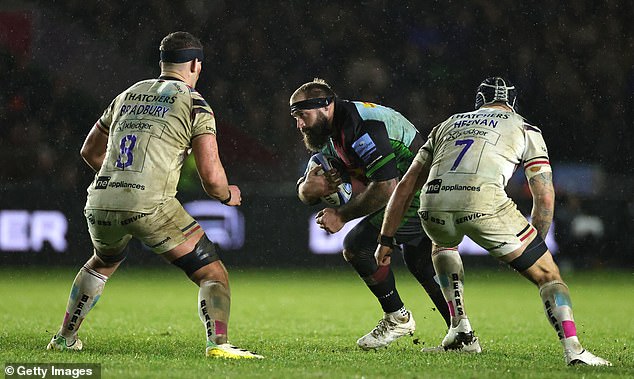 Marler described his comments to Heenan as ‘p*** poor’ – but his latest brush with controversy has only seen him punished with a fortnight’s ban, meaning his Six Nations hopes are still alive

‘He has been apologetic and probably the key thing for me is that Jake accepted his apology. Clearly what he said was wrong and he wouldn’t have said it if he knew the full context.’

The RFU added in a statement: ‘In all the circumstances of the case, the panel concluded a ban of six weeks was proportionate but that it was also appropriate to suspend part of that sanction.

‘The panel found that an immediate ban of two weeks should be imposed and that the remaining four-week ban should be suspended until the end of the 2023/24 season (and may be activated should the player commit a similar offence).

‘The panel require the player to give a presentation to a local club or school, and to a Premiership academy, on the core values of the game.’