Another day, another high-water mark for Emma McKeon, now the most decorated athlete in Commonwealth Games history.

McKeon has added another gold and a bronze to her unrivalled Commonwealth medal collection which now numbers 19. 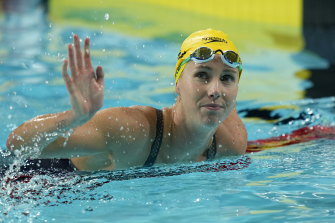 Emma McKeon has now won the most medals in Commonwealth Games history.Credit:AP

“I am proud … I don’t really know what to say,” McKeon said.

“The medals are rewarding obviously, it’s what we train for.

“But for me, the most rewarding thing this year is being able to keep myself together for the week, to be able to get up behind the blocks.

“Every time anyone gets behind the blocks, they’re taking a risk, you’re putting your heart on the line whether you succeed or fail.

“So just being able to get up every day and do that, I’m proud of myself for that.”

McKeon’s latest milestone comes after she scaled another landmark earlier in Birmingham – most gold medals ever.

The Australian ace now has 13 career golds – three more than any other Commonwealth athlete.

McKeon has won five golds, one silver and a bronze in Birmingham.

And she’s all but certain to feature on Australia’s favoured women’s 4×100 medley relay team on the last night at the pool on Wednesday.

Win gold again, and McKeon will equal Ian Thorpe and Susie O’Neill’s record for most golds at a single Games – six.

O’Neill achieved that feat in 1998 and Thorpe equalled it four years later.

(As at end of August 2 competition in Birmingham)