There’s not too much information a person can or should even attempt to glean from the first College Football Playoff rankings of any season, and this one in particular given the unusual scheduling circumstances teams are navigating.

But there’s one conclusion that can easily be drawn from Tuesday’s rankings: Cincinnati and BYU need to find a way to play.

While the selection committee showed a lot of respect for the Bearcats by slotting them No. 7 — the highest ever for an American Athletic Conference team in the first ranking — BYU being placed at No. 14 indicates the committee just doesn’t think much of the schedule the Cougars have played.

Cincinnati clearly has an outside shot at the Playoff. BYU has a chance to finish high enough in the rankings to earn an at-large bid to a New Year’s Six bowl game. But the reality is, both of those teams are going to need one more quality win than they currently have available to reach those goals.

So why not schedule each other? 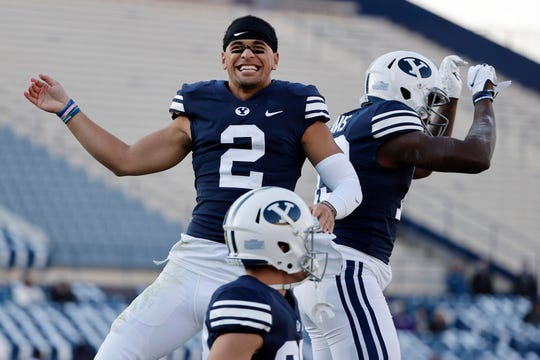 It’ll be more difficult than it seems, that’s for sure. The 8-0 Bearcats have an open date on Dec. 5. The 9-0 Cougars have just one more game scheduled, period, on Dec. 12, against San Diego State. So that calendar could work. But deciding where to play it, and getting both schools to agree on the risk-reward factor, is probably more complicated.

If Cincinnati only plays the games currently on its schedule and wins all those games, it will earn the New Year’s Six bowl spot reserved for the top-ranked Group of Five team. That’s the primary focus, and adding a quality opponent like BYU would potentially put Cincinnati at risk of slipping behind a Coastal Carolina or a Marshall.

At the same time, the Playoff is a more realistic goal than it ever has been for a Group of Five program. Cincinnati will need help. The scenario would probably include Clemson losing a second time to Notre Dame and Florida losing to Alabama in the SEC championship game among other things. But if that happens, Cincinnati adding a win over BYU would present a strong argument for jumping over a one-loss Texas A&M team that wouldn’t have to play in the SEC championship game.

Meanwhile, it’s now clear that BYU simply can’t get into the top 10 without another quality win. As good as the Cougars have been, their best win among a cobbled-together schedule was 51-17 at Boise State, which the committee is discounting a little bit because the Broncos had key players unavailable.

BYU’s only chance to play in a New Year’s Six game would be to beat a top-25 team like Cincinnati. The Cougars should be highly incentivized to make it happen.

We’ll see what the schools decide to do, if anything. But the committee made it clear that both are going to fall short unless they schedule each other.