Two months ago, Sam Short thought his quest for Commonwealth Games glory in the 1500m freestyle was over after a brain fade with two laps to go at the Australian trials.

But on Wednesday night (Thursday morning AEST) in Birmingham, the 18-year-old showed why he has a huge future by smashing his personal best by more than 10 seconds to claim gold and etch his name alongside some swimming greats on a final night in the pool that solidified Australia’s place at the top of the tree. 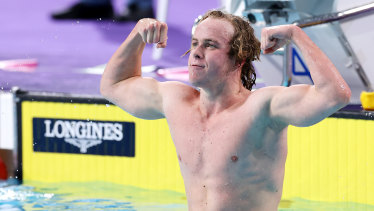 Sam Short after his victory in the 1500m final.Credit:Getty Images

Short’s scintillating victory, in a time of 14:48.54, was the 24th of Australia’s 25 gold medals across six absorbing nights at the pool.

Australia’s 21 silver medals and 19 bronze medals took their tally to a whopping haul of 65 in total – more than double that of England (32) and Canada (20).

While Ariarne Titmus’ 400m victory over Summer McIntosh was sweet, every member of the Australian swim team will know what Short’s maiden international title meant to him.

Short missed out of qualifying for last year’s Tokyo Olympics before almost shooting himself in the foot at the Australian trials.

With 100 metres to go in his pet 1500m event, Short touched the wall thinking the race was done.

But with arms and lungs burning, Short quickly got the message from animated officials that he needed to whizz up and back the pool for a couple more gruelling laps with nothing left in the tank.

Short’s time, because of the error, was just outside qualifying. He looked like he was about to cry.

But those same team officials who gave him a reprieve were vindicated on the final night of swimming events in Birmingham as Short made a move with 600 metres to go to beat Northern Ireland’s Daniel Wiffen by 3.25 seconds.

“It’s very satisfying … a personal time and I swam the whole way this time,” Short said.

“It feels really bloody good. Sub 14:50 is what I’ve been training for for a long time. To finally put the race together properly … stoked. I would have preferred a good time over the gold but to get both is amazing.”

Short is now the fifth-fastest Australian of all-time – behind Grant Hackett, Mack Horton, Kieren Perkins and Jack McLoughlin – in an event that traditionally dominated by swimmers with gold caps.

His time would have got him fifth spot at the Tokyo Olympics. Short has two years to trim the 10 seconds he believes will be the difference between a medal and going home empty-handed from Paris.

“It’s [a race with] extremely rich history and I’m only 18. I’m trying to put my name on that list,” Short said.

“I’ve got a long way to get to their level but I think I’m on the right track and I know I can get there.

Meanwhile, Australia’s women took out gold in the 4x100m medley relay ahead of Canada and England, while their male counterparts had to settle for silver in the same race by a margin of 0.08 seconds despite a rapid final two-lap surge from Kyle Chalmers in the freestyle leg.

Trailing by 0.58 seconds at the 300-metre mark, Chalmers pushed level with Tom Dean in scenes reminiscent of Ian Thorpe against Gary Hall jnr at the Sydney Olympics. 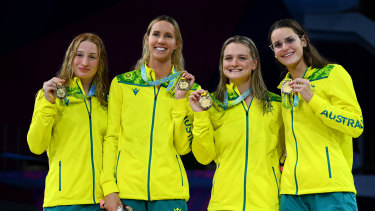 Australia took out gold in the 4x100m medley relay on the final night of competition in Birmingham. Credit:Getty

However, a loud home crowd can take some credit for willing their man to the finish line as England nabbed their eighth gold in the pool.

The 18-year-old will arrive back in Australia with seven medals (five gold, two silver) in her suitcase, including an unexpected gold in the 100m freestyle ahead of McKeon.

By the time the Paris Olympics finish in 2024, O’Callaghan could be the face of Australia’s Olympic team, such is her eye-catching improvement.

Australia came for gold and got plenty of it. There were very few horror results and signs look promising for the Paris Olympics in two years’ time.

Best bets for the U.S. Open