It's not really akin to the sporting concept of "junk time" but, make no mistake, when a grand slam men's singles match enters ridiculous scoreline territory, with the final set showing both players in double figures, it's simply time to wrap things up.

Essentially, sometimes you can get too much of a good thing. 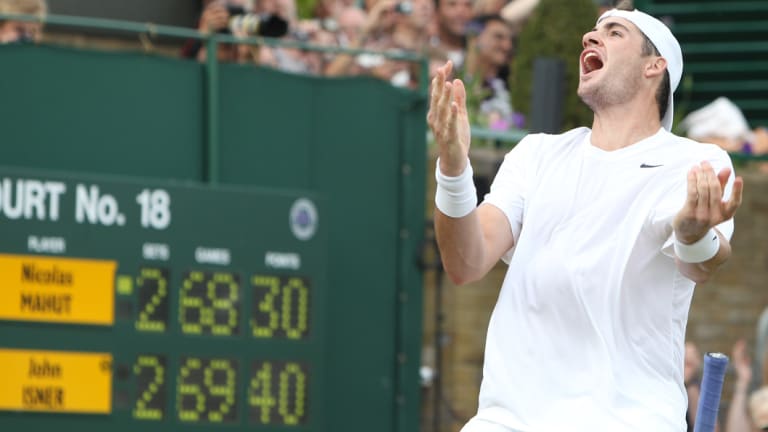 John Isner reacts after his epic victory over Nicolas Mahut at Wimbledon in 2010.Credit:AP

The issue of excruciatingly long tennis matches again raised its head in 2018. Call it the John Isner Effect, if you like. The man who spent more than 11 hours on court – spread over three days – to outlast Nicholas Mahut 70-68 in the fifth set of their first round match at Wimbledon eight years ago, was at it again this year.

In the semis at the All England Lawn Tennis and Croquet Club, the big-serving American slugged it out against Kevin Anderson before succumbing 26-24 in the decider.

Isner probably won't break through for a slam triumph during his career but he at least can claim to being an integral part of the two longest singles matches in Wimbledon history.

Well, the famous English tournament recently bowed to pressure from players, coaches, fans and perhaps even broadcasters and introduced a final set tie-breaker (first player to seven with a margin of two). Crucially, however, the breaker will be applied only when the score reaches 12-12.

Now it seems Tennis Australia is also weighing up a change – as early as the next Australian Open in only a few weeks – to bring in a final set tie-breaker. But they reportedly want a "super tie-breaker" (first player to 10 with a margin of two) when the game score reaches 6-6.

Perversely, the four grand slams might end up with four different systems to break a deadlock. Heck, why not? When the majors are spread across surfaces on Plexicushion Down Under, clay in Paris, grass at Wimbledon and Pro DecoTurf in New York, why not spice things up further?

There's no indication the French are looking to dabble with fifth-set tie-breakers at Roland Garros while at the US Open, of course, all sets are determined by an "orthodox" first-to-seven tie-breaker when the score reaches 6-6.

When putting the length of matches under the microscope, there appears to be little opposition to change, particularly for serve-friendly surfaces where breaks of serve are rare beasts.

But I'm warming to the view that a tie-breaker – regardless of the version – to finally split players shouldn't be applied TOO quickly in the final set, and a scoreline of about 12-12 is about right. 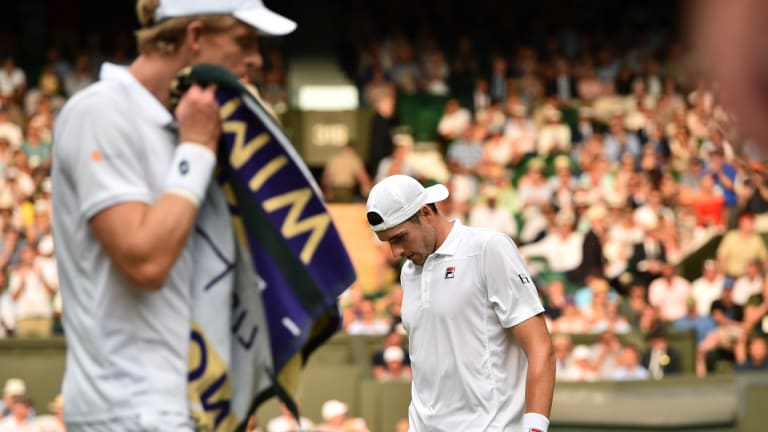 Isner was at it again against Kevin Anderson at Wimbledon this year.Credit:AP

This is a change of heart. I've always LOVED the drama associated with ridiculously long singles matches and regard the Andy Roddick versus Younes El Aynaoui quarter-final at Melbourne Park 15 years ago, where the final set went for two hours, as a cherished memory.

A trigger at 12-12 for a tie-breaker is a good compromise. After a combined 24 games in the deciding set, it's pretty clear that everyone, especially bums-on-seats fans, have got value for money. By that stage the match would undoubtedly have been replete with thrilling highlights and tough rallies.

The inherent stipulation for the final set in men's and women's matches to be decided by a two-game margin has resulted in some extreme situations and scheduling dilemmas. Not always on a Isner-Mahut-Wimbledon-2010 ludicrous-level, but difficult or annoying nonetheless.

Think the middle Saturday at Melbourne Park in 2008. After 267 minutes, Janko Tipsarevic pushed Roger Federer to 10-8 in the final set in a centre court match that encroached into the night session.

Then, by the time Lleyton Hewitt and Marco Baghdatis eventually made it on court – for a weekend session when tickets are typically snapped up months in advance – it was nearly midnight.

They finished their five-set contest at an extraordinary time – 4.34am. Sure the Federer-Tipsarevic fifth set lasted only 18 games but this day in particular showed how the sport's unique scoring systems can result in some weird outcomes.

Some argue that in an attempt to combat the inordinate length of matches the focus is misguided. There's an argument that the climactic end of matches shouldn't be curtailed in any way. The thinking goes that tennis should seriously look at best-of-three setters with the deciding set to last as long as required. For some, a 7-6 (10-8), 4-6, 16-14 scoreline is indeed beautiful.

Part of the debate is whether final set tie-breakers, regardless of the version, should equally also be introduced for women's matches which are best-of-three contests across the board in tennis.

For mine, any departure from five-setters at the slams would be regression. 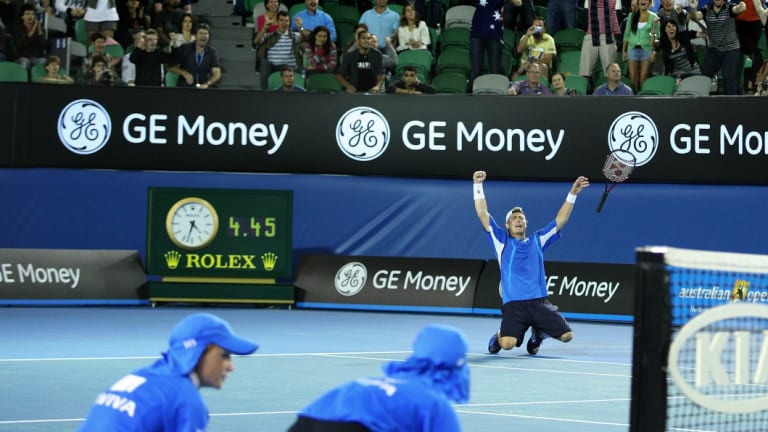 At the majors, let women's matches remain as they are and, most importantly, to be decided by a two-game buffer. Sure, Simona Halep was feeling the pinch and finished up on a drip in hospital after a string of gruelling contests that went the distance last January (including 15-13 versus Lauren Davis) but, in truth, that doesn't happen very often.

However, when the men's draw turns up some absurd or eye-catching scorelines, the situation is often different. Many of these matches finish well after midnight and, in many instances, fans who were there for the start are tucked up in bed by the finish.

There's a saying that could equally apply to hitting the town and watching tennis: very rarely do good things happen after 2am.