Vitality Roses ensured their memorable 2018 ended on a high with a 66-37 victory at the Copper Box, completing a 3-0 series whitewash over Uganda.

Having edged past the She Cranes in Tuesday’s opener at Liverpool’s Echo Arena, Tracey Neville’s team proved too strong at the Copper Box on Friday night and it was a similar story on Sunday afternoon.

Rachel Dunn led a superb performance under the posts from the Roses attacking options as Helen Housby, Sasha Corbin, George Fisher and Nat Haythornthwaite all played their part in 29-goal victory that got better the longer the game went on.

Housby completed a spectacular week’s work with a superb first-half performance but Neville will be delighted with the strength in depth that she called for before the three-game series as the younger elements of the Roses squad played their part throughout.

The England head coach had outlined plans to use her options as preparations continue for the World Cup, which takes place in Liverpool next July, and both Fisher and Fran Williams underlined their potential with the evergreen Dunn also showcasing her skills that earned her a return to international action.

Neville handed starts to Williams in place of Jodie Gibson, and Corbin for Haythornthwaite in attack but it was the familiar faces of Housby and Dunn who got England off to a fast start, leading by 10 after the opening 10 minutes of the contest.

With the Roses playing their final game of a year that saw them claim a first major title with the Commonwealth Games, they were roared on by an expectant Copper Box crowd, and they responded by ending the opening 15 minutes with a 20-8 lead.

Much as they had done in the first game of the series, Uganda battled gamely to stay in the contest and, led by Peace Proscovia, they edged the second quarter 12-11 to close the gap to a single goal at half-time. 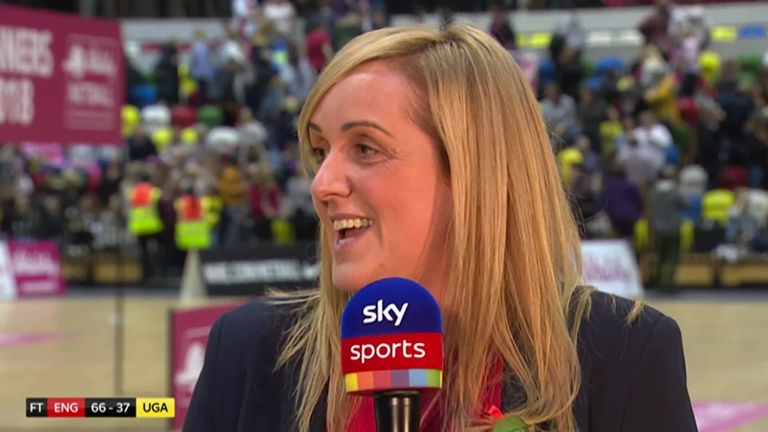 Haythornthwaite replaced Housby at the break and immediately linked up with Corbin to put the Roses on the front foot, but it was the Corbin-Dunn axis that took England clear.

Dunn’s pinpoint accuracy ensured England led 43-24 when she was replaced by Fisher, and the Mavericks shooter maintained the scoring touch as the Roses headed into the final 15 minutes with a 17-goal lead.

Feeling the effects of their first-ever major series against one of the sport’s established team, Uganda tired in the final quarter as Neville introduced Gabby Marshall and Razia Quashie to join Williams and Fisher in a youthful team.

Fisher and Haythornthwaite made sure there was no let up in the scoring, the Roses finishing the match as they had done with an identical 20-8 scoreline for the first and final quarters, bookending a superb 66-37 victory.

Neville will have been delighted with how her team fought back, after finishing second in the Quad Series and losing 3-0 in Jamaica, she wanted a reaction and was quick to follow that up with her demands after a tight first match.

However back-to-back dominant victories and performances will see them enjoy Christmas and return to action domestically in a huge year for the sport that will be dominated by the World Cup in July.

A huge 2019 will feature another thrilling Vitality Superleague which is just a month away and starts with the Super 10 on Saturday, January 5, live on Sky Sports

You can now receive all the latest Vitality Superleague news and more on your personal devices. The Sky Sports mobile app will keep you up to date with the latest news from your favourite sports, including netball – here’s how to receive the alerts you want.