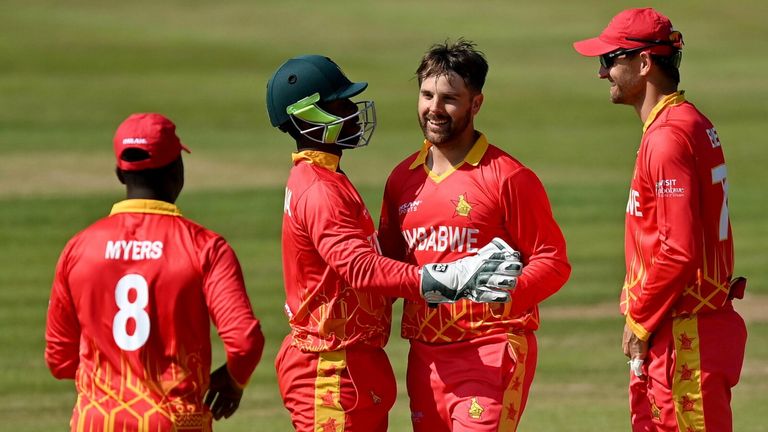 However, Luke Jongwe conceded just six runs from the penultimate over before Ngarava shipped just two in a two-wicket final over as Ireland ended on 114-9.

Ngarava started with two dot balls and a single before bowling Barry McCarthy and after Craig Young was run out penultimate ball, Ngarava conceded just one off the last with Ireland needing five to win.

Zimbabwe take a 1-0 lead in the five-match series, which continues on Sunday before further matches on September 1, September 2 and September 4.

Paul Stirling smashed five fours in a 19-ball 24 at the start of the Ireland chase before he fell to Jongwe and the hosts were well-placed at 65-2 in the 11th over, only to then lose two wickets in as many deliveries from Ryan Burl (3-22), including Kevin O’Brien (25 off 32).

Ireland’s slide saw them lose five wickets for 23 runs and be left needing 29 from their final four overs, only for Singh to strike Tendai Chatara for a four and a six in the 17th over and a four off Ngarava in the 18th.

But Jongwe (2-17) and Ngarava (1-17) bowled excellently at the death as Zimbabwe successfully defended a low total – and ensured the efforts of Player of the Match Regis Chakabva did not come in vain. Chakabva (47 off 28 balls) came to the crease with Zimbabwe 5-2 in the third over after Ireland seamer Young (2-15) had removed openers Wesley Madhevere (1) and Tadiwanashe Marumani (1).

Chakabva struck four fours and a six before he was bowled by Singh (2-22) to be fifth man out.

No other batsman reach the twenties but Burl (12 off 15) and Wellington Masakadza (19 off 15) scored valuable late runs for the tourists.

Both then impressed with the ball – Burl dismissing O’Brien, Ireland captain Andy Balbirnie (6) and George Dockrell (8) and Masakadza (2-18) accounting for Shane Getkate (5) and Curtis Campher (3).