A series of unfortunate events play out in Blockbuster‘s Season 1 finale, laying the groundwork for a potential Season 2 of the workplace comedy.

It all begins when Timmy arranges for former child star Lil’ Stevie (played by Saturday Night Live vet Bobby Moynihan) to make an in-store appearance, which quickly goes awry. He thus finds himself with a store full of aggravated customers when a solar storm wipes out the Internet. Without access to streaming services, everyone is desperate for DVDs — so desperate, in fact, that one customer rents a Jimmy Fallon movie. On purpose! Eventually, a fight breaks out between Percy and Lil’ Stevie, creating a domino effect among the clientele. By the time everyone flees the premises, Timmy’s store is completely destroyed.

On the will they/won’t they front, Timmy suffers an “I take thee Rachel” moment and accidentally blurts out Eliza’s name during a conversation with girlfriend—err, ex-girlfriend Lena. Eliza, meanwhile, rejects husband Aaron’s proposal to renew their vows, having realized that she loves Timmy. But by the time she gets a moment alone with him, the damage to the store has already been done, and Timmy — who witnessed Aaron get down on one knee but doesn’t know that Eliza rejected his proposal — tells his One True Love that he’s done caring about anything and walks out of the store, feeling completely dejected.

Below, series creator Vanessa Ramos discusses the implosion of Timmy and Eliza’s respective relationships and contemplates how Season 1’s multiple cliffhangers would get resolved in the event of a Season 2 renewal.

TVLINE | Timmy appeared shocked when he said Eliza’s name instead of Lena’s. Had he really convinced himself that he’d moved on from Eliza?
He thinks he’s moved on, but we know he hasn’t. It was the sort of thing where you go, “OK, if I put all my energy into this, I can forget about this.” He’s having fun [with Lena], it’s this nice thing, and he’s been holding out hope that maybe these feelings will grow into something more. 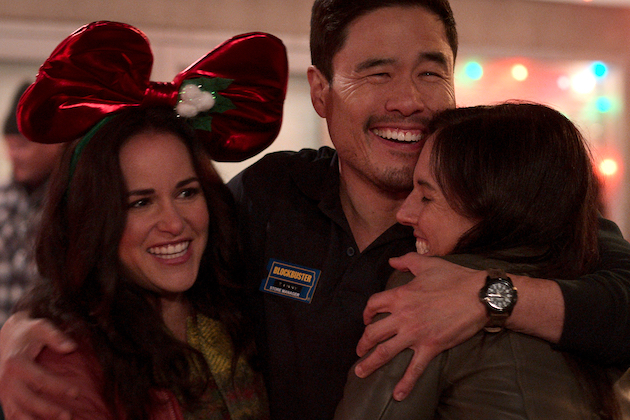 TVLINE | What is it that finally convinces Eliza to walk away from her marriage?
I think it’s seeing Aaron down on one knee. It’s this moment of going, “OK, I’m here again, where I was before, and this is how it turned out.” It’s seeing the image of what she’s been through before and being in a different place emotionally. And then when she looks up and sees Timmy picking up a DVD in the hallway, she sees the road she didn’t take.

TVLINE | Once the store gets trashed, that light in Timmy — that relentless optimism that helped keep Blockbuster afloat for this long — appears to have dimmed. How might that impact not only the future of Blockbuster, but his relationship with Eliza, in a potential Season 2?
I haven’t thought too much about that yet, [but] we did talk about what happens when you break the unbreakable man. What are your coping mechanisms? Do you just become a husk of yourself for a while?

TVLINE | Is this defeated version of Timmy going to stick around? Or will he find a way to pick himself up and salvage the store at the onset of Season 2?
I don’t know. I have mixed feelings about that. It would also depend on how much time has passed [in the show] when we come back for Season 2. I think the reality of it is that he would be down for a while, but Randall Park is such a joy to watch [when Timmy is happy] that I would be bummed, especially in a 10-episode season, to not get to play with that as much as possible.

What did you think of the Blockbuster finale — and Season 1 overall? Grade both via the following polls, then drop a comment with your review.