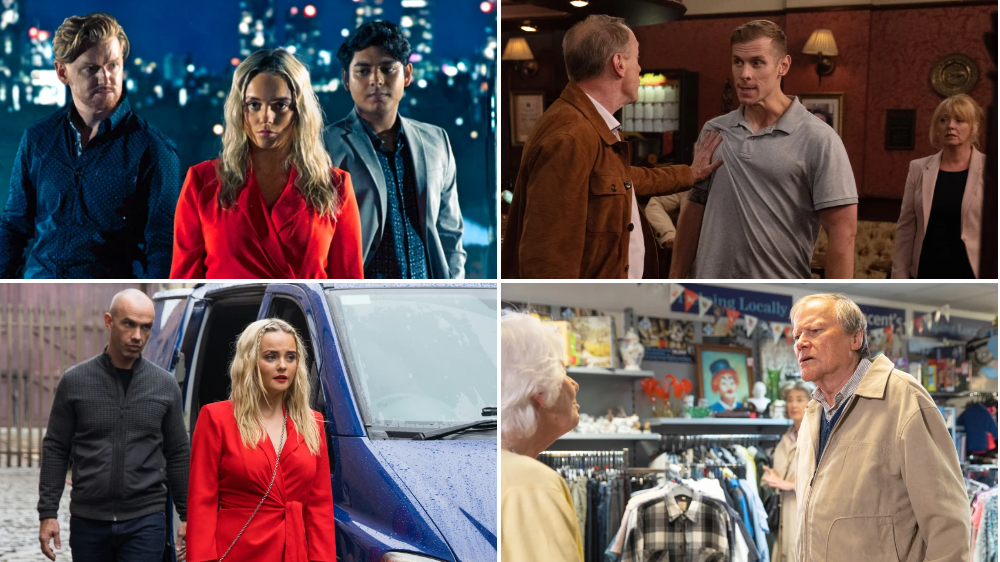 Coronation Street has a blockbuster week in store in next week’s episodes as Kelly Neelan (Millie Gibson) seems set to die in a horrific final showdown, complete with assassins, shootings, graves and rooftop stunts.

In a stand-off with Gary Windass (Mikey North), Kelly is too late to withdraw her demand that he is murdered; and soon the pair face a fight for their lives like no other.

Also fighting for his future is Stephen Reid (Todd Boyce) as he continues to try and pull the wool over Audrey Roberts’ (Sue Nicholls) eyes.

And he would have gotten away with it if it weren’t for the arrival of his fuming wife; and the digging of his neighbour Leo.

Elsewhere, Roy Cropper (David Neilson) is upset when Hayley’s famous anorak is given to charity by mistake – but fear not, heroic Evelyn Plummer (Maureen Lipman) is on hand to save the day.

As Kelly stews over Gary she approaches Todd and, making out that she’s acting on behalf of a friend, asks him if he’s got any dodgy contacts. Todd asserts she’d be best to go to the police.

Called to the station to identify her kidnapper, Craig shows Kelly some photos, including one of Kieron, but Kelly makes out she’s never seen him before. Craig’s frustrated while outside the police station, Kelly approaches Kieron and offers him £10k to kill Gary. Will he agree?

When a panicky David reveals he thinks the sinkhole in the garden is opening up again the Platts plan to move out while Leo conducts a full survey. When Audrey suggests they can all stay with her, Leo clocks Stephen’s unease.

Leo confides in Jenny that he finds Stephen rather odd, as if he’s hiding something. Jenny masks her anxiety but has Leo stumbled on something more?

Desperate for some extra cash, Bernie persuades Nina to let her give the flat a good clean for Roy’s birthday. Finding a box of old clothes, Bernie suggests they donate them to charity. However Nina fails to spot Hayley’s red anorak in the box! How will Roy react on discovering the anorak is gone?

Kelly tells Aadi she’s booked their tickets to Bangkok, but fails to mention they’re one way. At the bistro Kelly’s overcome with emotion as their engagement party takes place.

As Rick appears in Kelly’s thoughts, Gary offers some heartfelt words about Kelly and how much they love her being a part of their family. With hate burning in her eyes, Kelly tells Gary that she knows he murdered her Dad and runs out of the bistro.

Gary goes after her and to his horror, finds her standing with Kieron next to a van. As Gary’s knocked unconscious and thrown in the van, Kelly tells Kieron he’ll get the rest of his money once Gary is dead.

But as the van speeds away, Kelly wonders what she’s done. Kieron and his sidekick, Al, lead Gary through the woods to the very place where he killed Rick and pointing a gun at him, order him to dig his own grave.

Having paid for their spa day, Stephen checks that Audrey and Gail have left. As he makes out he enjoyed a night in a posh hotel, Leo wonders why he’s lying. Audrey arrives back from the spa day early and reveals she found a valuer from the estate agents at her house, who told her that Stephen made the appointment.

Stephen’s thrown whilst Leo listens, intrigued. Can Stephen talk himself out of this one? And will Leo reveal what he knows about Stephen as the two men come to blows?

When Evelyn presents Roy with a model train for his birthday, Roy recognises it as his own. Realising that the train must have come from the same charity shop where Hayley’s anorak is residing, Evelyn orders Roy to fire up the Woody.

Alerting Aadi, Gary explains that Kelly’s in danger and they need to track her phone and go after her. Outside a disused mill, Kieron leads Kelly onto the roof and reveals his plan to kill her and frame her for Gary’s murder, making it look like murder-suicide. Kelly pales.

Spotting Kieron’s van, Gary and Aadi are aghast to see Kelly on the roof. As Kieron goes to push Kelly off the roof, Gary suddenly appears, telling Kieron to kill him instead. As the gun goes off, who has been shot?

David threatens to call the police but Stephen stops him. As Leo storms out Jenny follows him, a lot of explaining to do! David quizzes Stephen about why he spent the night in his car and why the valuer turned up at Audrey’s house.

However they’re interrupted mid row by a knock at the door, Stephen’s heart sinks to see Gabrielle there. Will she reveal all? Leo tells Stephen that it’s clear he’s lying to his family and lying about his financial situation and he intends to find out why.

Evelyn marches into the charity shop and rips the anorak from Joy’s back. As Evelyn heads out, Joy’s left bewildered. How will Roy react when Evelyn returns with the anorak?