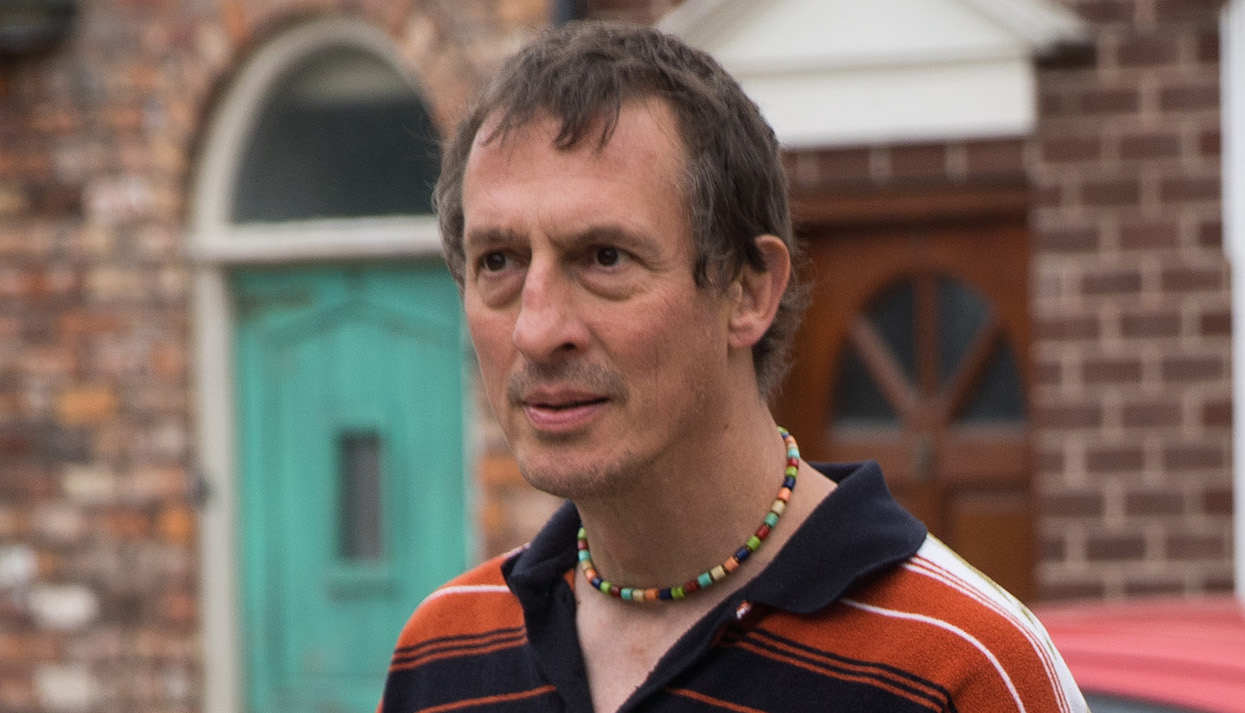 Ever since Spider Nugent (Martin Hancock) returned to Coronation Street he’s been a bit cagey about his personal life. This seemed to have been explained when it was revealed that he’s married.

But in Monday’s (September 12) episode, viewers discovered that Spider is hiding a much bigger – and more shocking – secret. He’s an undercover police officer.

The jaw-dropping revelation came after Spider had again declared his love for Toyah (Georgia Taylor). She was hesitant because of knowing that he’s already married, but he explained that things were over between him and his wife. Even so, Toyah was worried about being hurt again.

‘This, you and me, I don’t think I can do it,’ she told him. But as he made to leave, Toyah realised that she couldn’t let him go. She made him promised his marriage was truly over.

‘Toyah, it’s only ever been you,’ he said and they kissed.

Later, Imran’s mum Saira (Kim Vithana) spotted them kissing on the balcony and she went straight to DS Swain (Vicky Myers), who didn’t seem interested to hear that Toyah had a new boyfriend – until she heard his name, when the expression on her face changed.

The reason for this became clear when she approached Spider in the street and greeted him as ‘Detective Constable Nugent.’ Spider? Tree-huggy, alternative activist Spider Nugent – in the police? We didn’t see that one coming.

Martin Hancock thinks it’s an interesting development for his character, and fits with Spider’s personality. ‘It’s interesting, it’s not what you expect from Spider, which is great,’ he told us.

‘It’s just a way of progressing the character and a new idea for the character. He’s still a very committed activist, but he’s doing it from inside the system. I can’t give it all away, but there’s quite a powerful backstory behind why Spider went into the police. It’s very powerful, actually. In my mind, it works.’

Spider’s immediate problem is that, with Toyah’s trial looming, DS Swain now has someone with an inside track on Toyah. ‘Get her to talk about her husband,’ she ordered him. ‘I want to know everything.’

Spider was obviously reluctant to do this because, as Martin confirms, his feelings for Toyah are absolutely genuine. ‘The one person in the world he doesn’t want to mislead or hurt is Toyah,’ he insists. ‘The truth of the matter is that he absolutely adores her.’

DS Swain, however, threatened to end his career if he didn’t do as she asked. ‘What happens when I tell your handler who’s been keeping you warm at night?’ She said that if he let a murderer walk free, ‘Your case and your career are both dead. Is she worth it?’

Martin says that it’s a huge conflict for Spider because, as much as he loves Toyah, he’s also deeply committed to what he’s doing in the police.

‘He’s still Spider but he’s just getting a bit more radical, in a way, because what he’s doing is going after some very dangerous stuff. Spider is still incredibly committed. He believes in the cause.’

But will he put his work ahead of his love for Toyah?

‘I don’t want to give the game away!’ Martin says, ‘But I think we all know what sort of person Spider is and how he feels about Toyah.’

'Below Deck': Kate Chastain Reveals That Eddie Lucas Was the Real Reason She Joined the Show (Exclusive)