Prince Harry and Meghan Markle will join the rest of the Royal Family and hundreds of world leaders and delegates at Westminster Abbey to say their final farewells to Queen Elizabeth II. However, while speaking to US correspondent Kinsey Schofield on GB News, Eamonn Holmes suggested the Duke and Duchess of Sussex’s attendance could threaten to overshadow the historic occasion.

Eamonn didn’t beat around the bush as, after hearing from Kinsey how people in the USA had reacted to the Queen’s death, he asked outright: “Could Meghan Markle spoil it?”

Kinsey let out a chuckle before she replied: “Oh, leave it to Eamonn…”

“Is she the name that should not be mentioned?” Eamonn probed further after they shared a laugh, prompting Kinsey to reply: “I do think so.

“I feel like she is going to spoil it for some people because they feel like Meghan and Harry have done everything in their power to harm the monarchy. 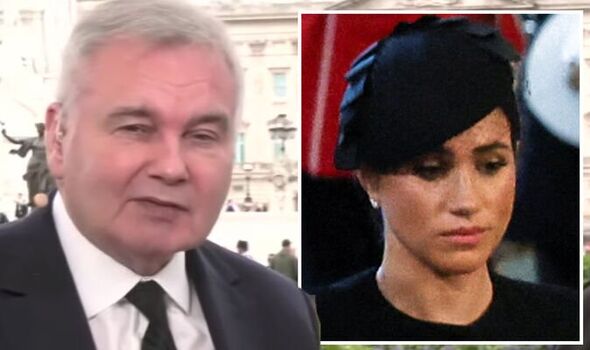 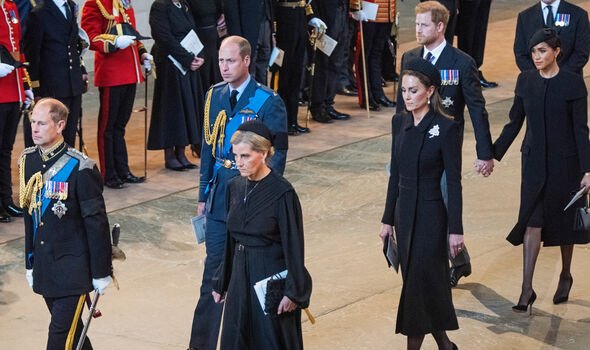 “And Queen Elizabeth is a reflection of the monarchy of the past few years,” she added.

Eamonn continued putting Meghan and Harry in the firing line as he quizzed further: “She’s going to be here, she’s still going to milk it for all it’s worth from a point of view that, I suppose, that’s currency for her in the future.

“I suppose if she’s here, she’s got things to be victimised for in years to come, or am I being too cynical and cruel?”

“Well, I will say we’ve got a Netflix series coming out,” Kinsey replied. “And perhaps this is great material for it, unfortunately.” 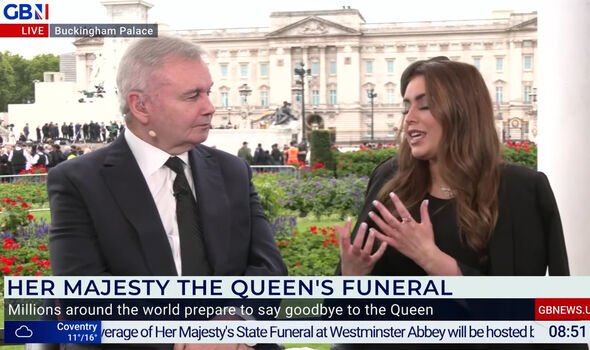 She continued: “I would hope that they would have more class than that but I’m not sure at this stage in the game.”

Eamonn continued to shine focus on the Sussexes when she asked about Meghan’s “brand” in the States.

Kinsey revealed: “Let me tell you what, it was interrupted full stop by the death of Queen Elizabeth because she was in the middle of a full PR blitz.

“The cover of the Cut magazine with that bizarre article, she had a cover of Variety which they’ve had to postpone, Variety magazine I guarantee you is a huge win for her.

“The podcast that she’s postponed, so she was making an effort to really become a starlet in America and then the death of Queen Elizabeth has left a really bad taste in people’s mouths.

“We know that Harry and Meghan were offered an invitation to see the Queen before her death and they rejected that invitation.”

“Something they may live to regret,” Eamonn pondered as Kinsey agreed: “Absolutely, without a doubt.”

While Eamonn and Kinsey seemed in agreement, GB News viewers at home were rather divided about the discussion turning to the Sussexes on the day of Her Late Majesty’s funeral.

@GirlyBrown3 reacted on Twitter by saying: “Sticks and stones won’t break this beautiful couple. They’ll be here when all these haters are long gone. ROYALTY is a medieval practice that has its future in doubt anyway. I much prefer the world of Harry And Meghan.”

While @A_Liberty_Rebel weighed in: “Very refreshing on #GBNews to hear an American commentator criticising the self-publicity obsessed Meghan Markle, & reminding us she’s nowhere near as either famous or popular in the US as she, her PR flacks, & gullible UK cheerleaders would have us believe.”

But @BrigitteOhNo hit out at the coverage, saying: “GB News need to stop talking about Harry & Meghan on the day of the funeral. Very low rent. @GBNEWS.”

Breakfast with Eamonn and Isabel airs Monday to Thursday at 6am on GB News.

Bachelorette Clare Crawley Opens Up About Ex Juan Pablo Galavis: 'It Didn't Have to End Bad'