The Conners may be saying goodbye to a beloved character before season’s end.

The synopsis for the Roseanne spinoff’s Thanksgiving episode reveals that trouble-making family matriarch Beverly (played by Estelle Parsons) is unwell. More specifically, “Jackie must come to terms with her mother becoming ill.”

Executive producer Bruce Helford previously told TVLine that he was hoping to have Parsons back for Season 5. “We’re cautiously optimistic that Estelle will be returning,” he said in September. “We’ve got a couple of important episodes we’d like to do with her.” 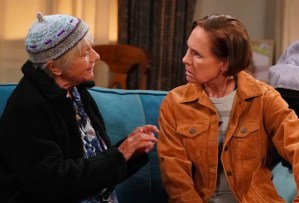 Parsons originated the role of Bev in Season 1 of Roseanne, appearing in 59 episodes across the sitcom’s original nine-season run. She reprised her role in a pair of revival episodes in 2018, then returned for six episodes of the sequel series — most recently appearing via FaceTime in the penultimate Season 3 installment “Jeopardé, Sobrieté and Infidelité.”

Her most significant spinoff arc came in Season 2, when it was revealed that Bev had secretly retained ownership of the property that housed the original Lunch Box after it went under. After putting Darlene in charge of her estate, Darlene agreed to let Jackie and Becky reopen the roadside diner, which they eventually converted into a sports bar.

Season 4 marked the first season of Roseanne or The Conners where Bev did not appear in any capacity.

As previously reported, The Conners this fall will see the “oh s–t!” return of a Roseanne character not seen since the series’ original 1988-1997 run — a surprise guest star the executive producers refuse to spoil ahead of air. It was also confirmed that Season 5 has been extended from 20 to 22 episodes, marking the veteran comedy’s longest season to date.

Survivor': Adam Klein Reveals That Edge Players Intentionally Left Him and Others out of the Loop: 'It Felt Personal'