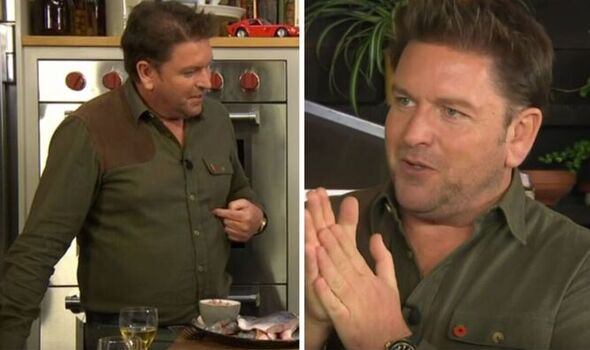 James Martin was back on Saturday with a fresh batch of recipes and guest chefs. Matt Willis was also welcomed onto the ITV programme to enjoy some of James’ dishes. However, one segment turned a tad chaotic when the presenter poked fun at his guest Paul Ainsworth, who is a regular face on the programme.

James made a joke that Paul would replace him as the show’s presenter.

He later went on to poke fun at his guest, telling him: “You weren’t invited on the show.”

During Atul Kochhar’s cooking segment, Paul and James watched on while he whipped up a fish dish.

“Have I got enough clams here because I am getting bored of this?” James said to Atul. “Have you got enough?”

However, the 50-year-old soon grew concerned there wasn’t going to be enough food for him to try the dish.

“Do you want me to get you two a room?” he joked. “I feel like I am the piggy in the middle of this.”

Paul burst out laughing as the guest chef asked: “Paul, how many do you want? Four prawns?”

“Don’t be shy on them scallops as well,” Paul replied before James weighed in: “I am here as well, you know. I quite fancy something to eat as well.”

“I forgot,” Atul replied before taking a swipe at James: “I was told this was Paul Ainsworth’s show.”

“He keeps reminding himself of that every time he comes here,” James explained.

“So what happened? Did you open the gates and Paul barged in?” the guest chef asked.

“He’s not invited,” James joked as Paul added: “I’m not even on the billing today.”

Later on in the programme, Paul made an apple and frangipane slice for James.

He also required the presenter’s help by asking him to spin some sugar to decorate his dessert.

James took the opportunity to take a cheeky swipe at Paul by pointing out he wasn’t invited onto the show.

“You sticking around for the rest of the show?” the chef asked as Paul joked: “I wasn’t even meant to be here, I snuck in.”

Despite the chaotic segment, fans loved seeing the banter between James and Paul.

Suanne Braun penned on Twitter: “B****y loving the chemistry between and the FOOD @jamesmartinchef and @PaulAinsw6rth are making today.”

“I love watching @jamesmartinchef on a Saturday morning. I especially like it when @PaulAinsw6rth is on. Great chemistry between them. My only gripe is that Paul is always happy & that is not acceptable,” user @punter_armchair added.

James Martin’s Saturday Morning returns next weekend at 9.25am on ITV.

Who is The Apprentice's Alex Short?