Prince Harry and William's 'lack of trust' discussed by Nikkhah

Author Valentine Low joined Good Morning Britain presenters Susanna Reid and Ed Balls to discuss his latest tell-all book on Wednesday. The book takes a look at the life of the royals including Prince Harry and Meghan Markle’s departure as working royals and the breakdown of his relationship with Prince William. Valentine told Susanna and Ed that Harry and Meghan were “unhappy” in the first year of their relationship and were ignored when asking for any help.

Touching on their turbulent first year of being married, Valentine explained: “In that meeting, it was said, ‘Listen, you are coming into the Royal Family from a different place.

“You are an actress, you are a grown-up woman, we can do things differently, let’s talk about how you want to do this.

“Then there is another guy, Sir David Manning, he cooks up this plan ages ago before he even met Meghan, which suggested that they could go and live in South Africa for a while. 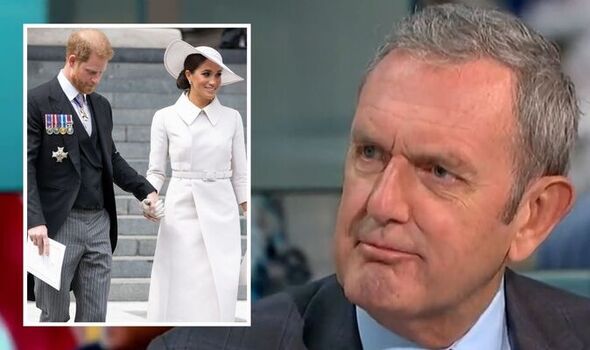 “That didn’t work out but these were two people who made a lot of effort to try and accommodate them but there is a way in which the courtiers are to blame.

“The people around them were doing their best, these were people who could believe in Meghan and Harry and wanted them to work.

“No one picked it up, no one flagged it, no big conversations with the courtiers in the institution.

“I don’t think it would have made any difference in the sense that they still would have left because what Harry and Meghan wanted and what the Royal Family and the Queen felt they wanted to give.

“I don’t think there was ever a meeting point but it could have been done so much more amicably.”

'Grey's Anatomy Station 19' Crossover: Which to Watch First When Streaming