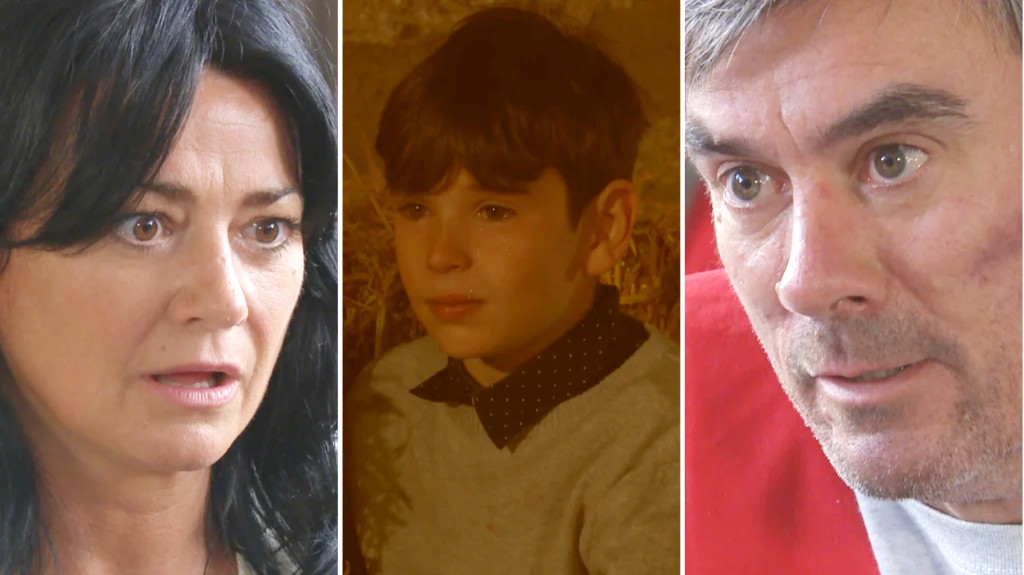 The terrible events of Al Chapman (Michael Wildman)’s shooting were replayed in tonight’s Emmerdale – and we saw exactly how it came about that Cain (Jeff Hordley)’s son Kyle (Huey Quinn) was the one to pull the trigger, rather than Cain himself.

The episode played out between four characters. In the prison, Cain was explaining the course of events to Moira (Natalie J. Robb) and insisting that he had to plead guilty to the killing to protect his son.

Meanwhile Kyle was at home, confessing what had happened to his mum Amy (Natalie Ann Jamieson). In between were flashback scenes which went back to the fight between Al and Cain on the day of Faith (Sally Dexter)’s wake, after Cain had discovered that Chas (Lucy Pargeter) and Al were having an affair.

Cain told Moira he didn’t intend to use the gun. When she questioned why he’d suddenly been so angry with Al, Cain simply said, ‘There are lines you don’t cross.’ He didn’t want to mention Chas’s part in events, so he made out that Al was goading him for grieving for a mother he’d never loved.

‘He was angry with someone,’ Kyle told Amy back at Butlers. ‘I wanted to make it better for him, so I followed him.’

In flashback we saw Kyle walk in on the fight in the barn. Scared when he saw Al hurting his dad, Kyle grabbed the gun and pointed it. Cain told him to put it down, and as Kyle hesitated, Al made a lunge for the weapon and the gun went off, the blast throwing Al to the floor with a wound to his chest.

Moira was devastated to hear what had happened, but was more devastated at the thought that Cain had pleaded guilty to save his son. She suggested that the courts would be lenient on Kyle if they told the truth. She said that it would ruin Kyle’s life to have to live with the knowledge that he’d killed Al and because of him his father had gone to prison, possibly for the rest of his life.

‘I’m warning you, do not go against me,’ Cain said, and got her to imagine how she would have reacted if it had been Isaac – her own biological son – in the picture rather than Kyle.

The scenes were deeply emotional as Moira and Cain came to the realisation that ‘It feels final, like it’s the end of us,’ in Moira’s words. Cain asked Moira to move on and forget about him, finding love with someone else if she wanted to. ‘If I died would you mourn me for 30 years?’ he reasoned. ‘You’re not dead,’ she insisted.

He asked her to promise him that she would keep the secret and keep Kyle safe. As she left the visitors’ room, she’d made no such promise.

Is she planning to reveal Kyle’s part in the death of Al Chapman in order to save Cain?

And if she does and Kyle faces punishment, will Cain be able to forgive her?