Sunday Brunch presenters Tim Lovejoy and Miquita Oliver were joined by guests Nina Wadia, Simon Callow and Mia McKenna-Bruce for the latest episode of the Channel 4 chat show. Cooking his speciality dish parmo, chef Max Halley made a hygiene mistake which Tim had to correct.

After beating the slab of meat with a rolling pin, Tim asked Max where he had come up with his dishes and creative ingredients for his parmo.

Max began: “I was on what might be described as a large night out in Middlesbrough, and at about 11:30 midway through said night, I was taken to a…”

However, before he could continue, Tim interrupted him and expressed: “Urm, Max, do not do anything with that garlic.

“You have chopped your garlic on a red board which has had meat on it, and you are not allowed to do that. If you would like to get rid of your red board.” 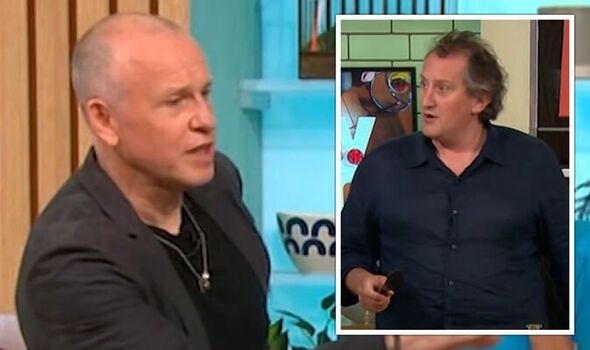 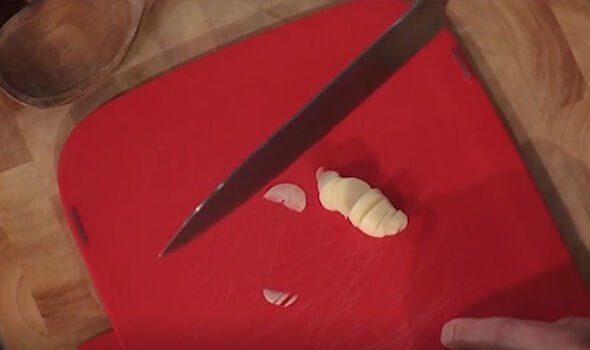 Confused as to what he had done wrong, Max asked: “Really? I’ll get rid of this, I’ll put this over here, shall I?”

Tim asked the behind-the-scenes crew: “Can we get him some more garlic?”

Some fans were in agreement with Tim and praised him for correcting Max, as @aneese_plz9 noted on Twitter: “Tim stopping the pro chef to tell him to change his board set the whole tone for the rest of the segment. Well done, Tim, the chef, should have known better.” 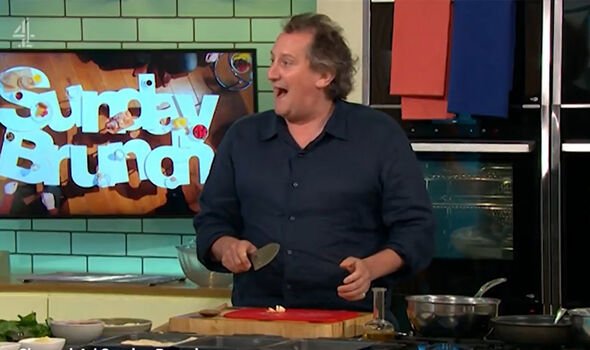 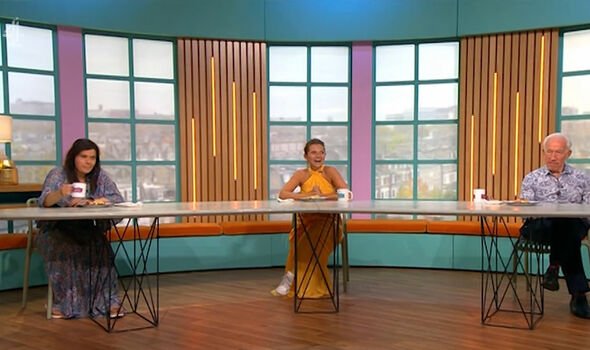 Claire Raskins commented: “Well done to Tim for stepping in for the PROFESSIONAL chef to educate him on the different chopping boards.”

However, not everyone understood what was wrong with Max cutting on the same board, with @flying_ants_day tweeting: “The garlic is going to be cooked…”

@Polly_Pickles9 asked: “I don’t understand why he needed to change the board if he was just going to chuck the garlic in a pan and cook it?”

Peter Wright said: “Cutting garlic on board that has had meat on it isn’t a big deal. Feel sorry for the chef after that, to be honest.” (sic)

This wasn’t the first blunder that Max came across, as during the beginning of his segment, the microphone hadn’t connected.

Tim was left having to hold up a physical microphone to Max as he began to explain what he was going to be cooking.

For Sunday Brunch, this wasn’t the first time that a hygiene issue occurred, as back in February, fans were furious at Michael O’Hare for his lack of hygiene.

Many fans of the show felt sickened he hadn’t tied his long hair up or pushed it back whilst he was cooking.

However, this didn’t seem to bother Tim’s co-host Simon Rimmer as he happily tucked into the Wagyu beef with smoked eel donburi.

After taking a mouthful, Simon commented: “Wow, wow, wow! That is spectacular, the texture, the flavour, that eel is really good.

“Wow, Michael, it’s brilliant. I’m so glad that we finally got you on the show,” he added.

Sunday Brunch airs at 9:30am on Channel 4 every Sunday.