Airport chaos at Gatwick has today forced hundreds of holidaymakers to wait and sleep on the floor after Easyjet baggage handlers caused four hour delays.

Passengers slammed last-minute flight cancellations, four-hour flight delays, faulty eGates at security and having to sleep on the floor of baggage reclaim in the early hours of this morning.

Meanwhile Afghan cricket star Rashid Khan also said late last night that he had to queue for immigration at Heathrow Airport for at least four hours, claiming that there were just two people manning the Border Force desk.

At 11.50pm last night he tweeted: ‘We have all been queuing for the last 4 hours. Only two person at the immigration desk for 2 airlines! Heathrow plz allocate more staff! We are still only half way!’ 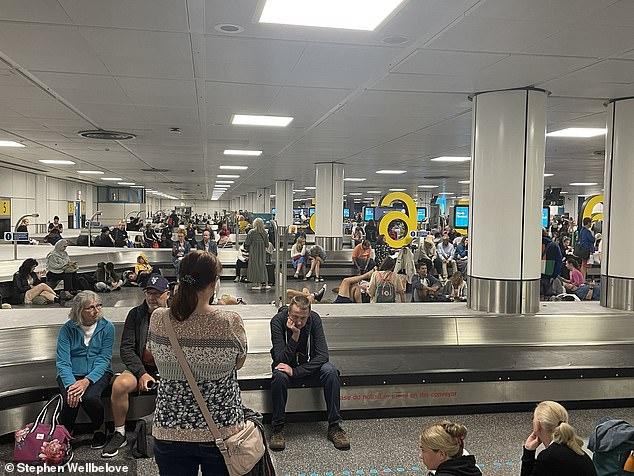 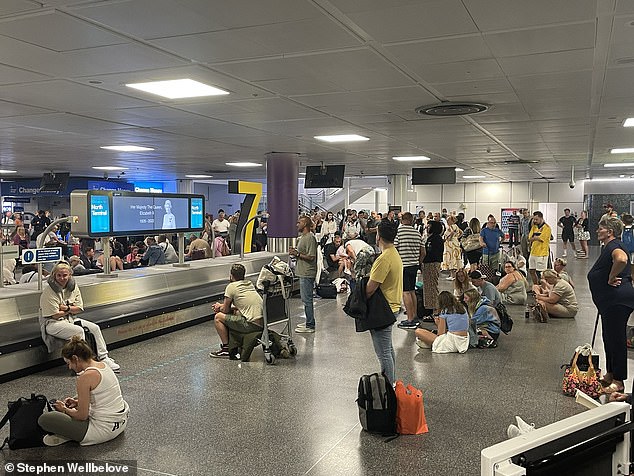 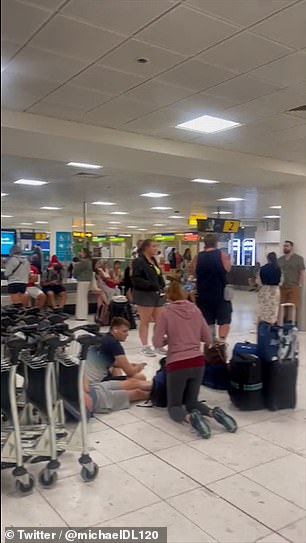 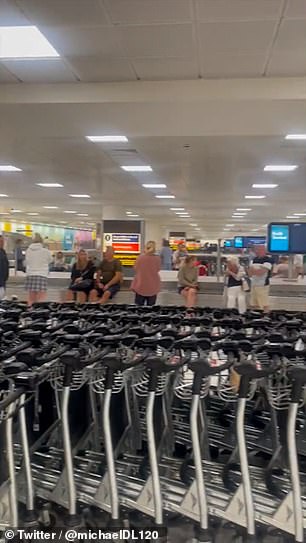 ‘Absolutely appalling service today,’ said Easyjet passenger Michael after facing a four hour delay at Gatwick baggage reclaim (pictured). He finally got home at around 7.30am this morning but had to pay for a missed cab transfer

Mr Wellbelove said he finally left the airport at around 4.30am after waiting three hours to get his bags – although there were still people lying on the floor.

He hit out at Easyjet and baggage handling partners DHL saying: ‘What is going on at London Gatwick. Hundreds and hundreds of people waiting for their bags at 2am on Saturday morning. Simply not good enough.

‘We waited over 3 hours to get our bag. When we left the baggage hall around 4.30 there was still people everywhere lying on floors.’

Michael said he faced a four hour wait at baggage reclaim after arriving at 1am and finally collecting his bags at 5am – after his Easyjet flight to Gatwick had already been delayed four hours.

He finally got home at 7.30am but due to the delay he missed his cab home and has been charged for the cab firm’s time.

He slammed the awful experience at around 3.30am, tweeting: ‘@easyJet @Gatwick_Airport absolutely appalling service today. 4 hour delayed flight, 2 hours spent on the plane.

‘Over an hour and half wait for baggage and no staff around to assist. Disgusting service.’

Fellow Easyjet customer Anne Lewis shared Michael’s view, replying: ‘Totally agree. We had two hour delay, then waited 30 mins to disembark after landing and a further 4 hours for our bags with no food or drink and nowhere to sit. No assistance, no information, no one from Easyjet in charge apparently. Disgusting service.’ 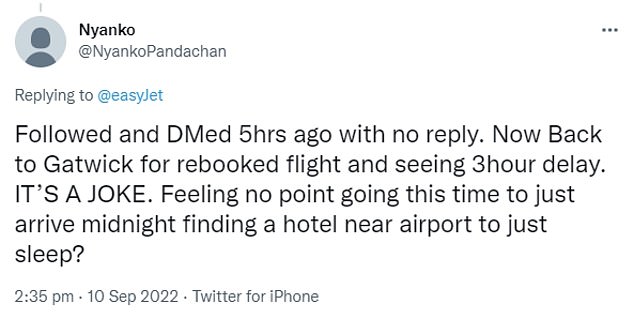 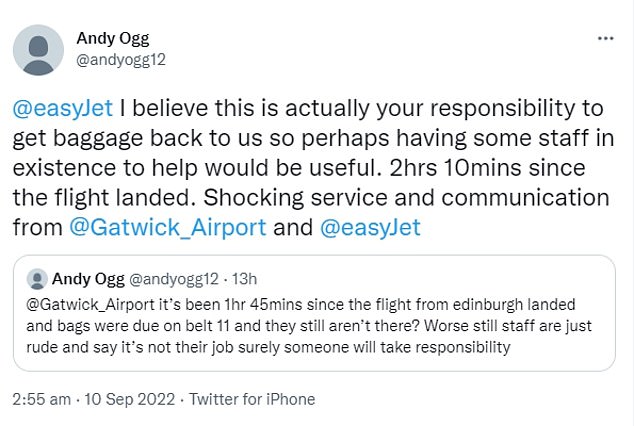 Passenger Ricky Vann slammed delays at Gatwick security as an ‘absolute joke’ at around 1am this morning, saying that automatic eGates for checking passports were ‘struggling to even work’

He said that it took him 30 minutes to get through as eGates were ‘randomly rejecting people’ and he was rejected twice, only getting through the second time on another gate.

He tweeted: ‘This whole experience has been awful and dare I even bother with compensation? They’ll all just blame each other – when they’ve all signed contracts so should be held to them.

‘To add insult to injury, TUI landed at 1:20ish and their bags are now here at the same baggage belt as mine (40mins after landing). Gatwick shouldn’t be apologising, this is all on DHL failing their contract and @easyJet not fixing or upholding it. How is this allowed to happen?’

He was still in baggage reclaim at 3am after a two hour wait, and posted a video showing hundreds of customers standing, sitting and lying on the floor.

Another Easyjet passenger, Andy Ogg, faced a delay of over two hours for their bags this morning.

At 2.30 this morning he tweeted: ‘@Gatwick_Airport it’s been 1hr 45mins since the flight from edinburgh landed and bags were due on belt 11 and they still aren’t there? Worse still staff are just rude and say it’s not their job surely someone will take responsibility.’ 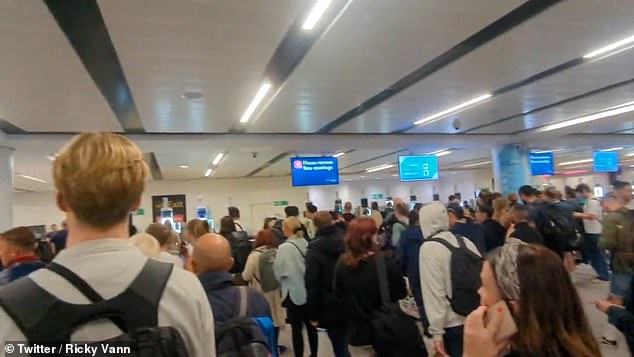 Passenger Ricky Vann slammed delays at Gatwick security as an ‘absolute joke’ at around 1am this morning, saying that automatic eGates (pictured) for checking passports were ‘struggling to even work’ 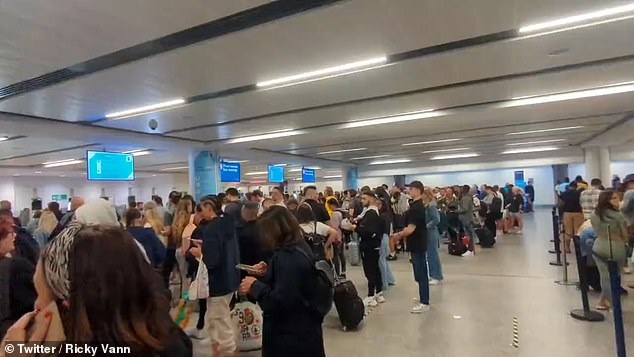 ‘This whole experience has been awful and dare I even bother with compensation,’ Mr Vann tweeted

At just before 3pm he added: ‘@easyJet I believe this is actually your responsibility to get baggage back to us so perhaps having some staff in existence to help would be useful. 2hrs 10mins since the flight landed. Shocking service and communication from @Gatwick_Airport and @easyJet.’

Another customer complained to Easyjet over Twitter after their 5.50am flight was cancelled less than two hours before it was due to take off from Gatwick.

Nyanko Pandachan said he then returned to Gatwick at around 2.30pm this afternoon and was facing a three hour delay for his rebooked flight.

At 4.45pm yesterday he tweeted: ‘Gatwick flight 05:50 EZY8243 cancelled by email at 04:10 AM. All we were told was to re-book online but there was no flights available at Gatwick airport today. We are committed to car hire/hotels/car park. Could have gone to work. Will you compensate any of this?

‘I have not started my trip yet thanks to your cancellation but already costing us over £200 cancel/rebook.’

After Easyjet replied asking him to DM them, he later tweeted at 2.35pm this afternoon, writing: ‘Followed and DMed 5hrs ago with no reply. Now Back to Gatwick for rebooked flight and seeing 3hour delay.

‘IT’S A JOKE. Feeling no point going this time to just arrive midnight finding a hotel near airport to just sleep?’

Wizz Air customer Nathaniel Arche also complained after his 7pm flight to Milan was cancelled last night at the last minute and had been waiting a total of 16 hours by 11am after his rebooked 9.30am flight today had not taken off

A Wizz Air customer also complained that their 7pm flight to Milan from Gatwick was continually delayed ‘until 1am when it was decided that it would fly back empty to Milan’.

Nathaniel Arche compained: ‘There was no effort to sort out hotels and only received a £4 meal voucher.’

At around 11am today he later added: ‘Plane was rescheduled until 9:30am on 10th September however at the time of writing it still has not left. Spent 16 hours at Gatwick @wizzair.

When asked for comment on delays at Gatwick, a spokesperson for the airport told MailOnline the responsibility for issues at baggage handling laid with Easyjet and their contractors DHL. They said the any security delays were the responsibility of the Home Officer Border Force.

MailOnline has contacted EasyJet and Wizz Air for comment on delays and cancellations.

The Home Office has also been contacted by MailOnline regarding security delays at Gatwick and Mr Khan’s immigration delays at Heathrow.