Americans BACK the end of affirmative action and want race kept out of college admissions, new poll suggests: Supreme Court now widely expected to ban it

A YouGov survey found that 54 percent of adults in the US were against universities considering race as a factor in selecting applicants — even as part of efforts to boost diversity on campus.

That far outweighs the 23 percent who wanted admissions tutors to use race to guide selections, and similar numbers who were unsure. Democrats were much more supportive of affirmative action policies than were Republicans.

The Supreme Court is weighing the legality of race-conscious admissions rules in cases involving Harvard University and the University of North Carolina (UNC), which imperil affirmative action schemes nationally.

Those programs have boosted enrollment of black and Hispanic students, who have historically struggled to secure college places, but to the detriment of white and Asian American applicants, critics say. 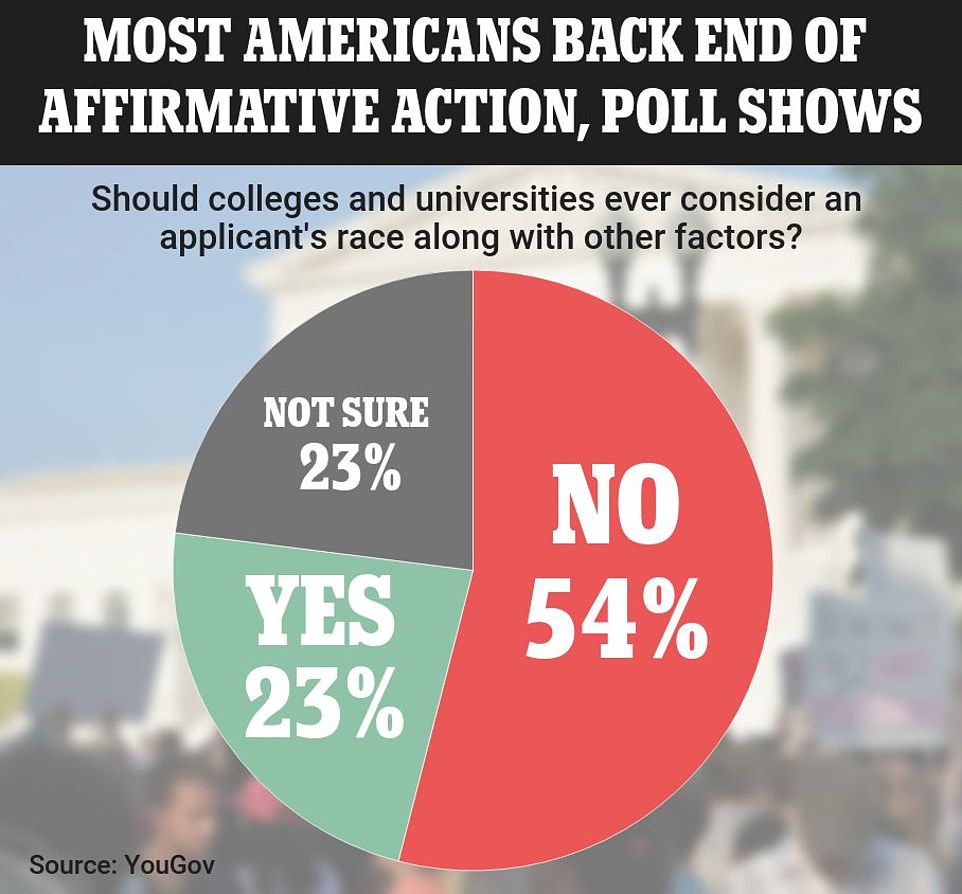 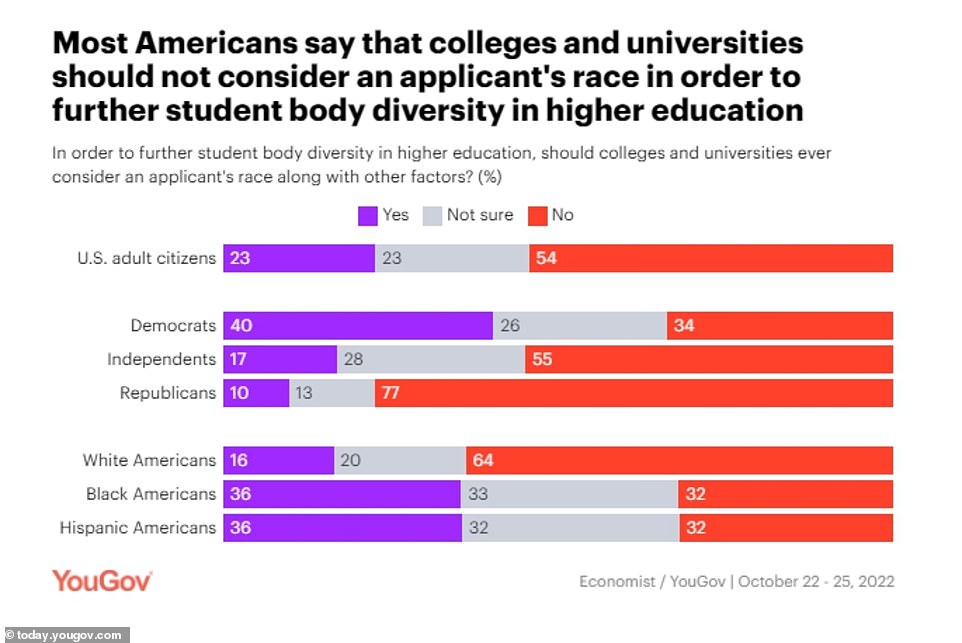 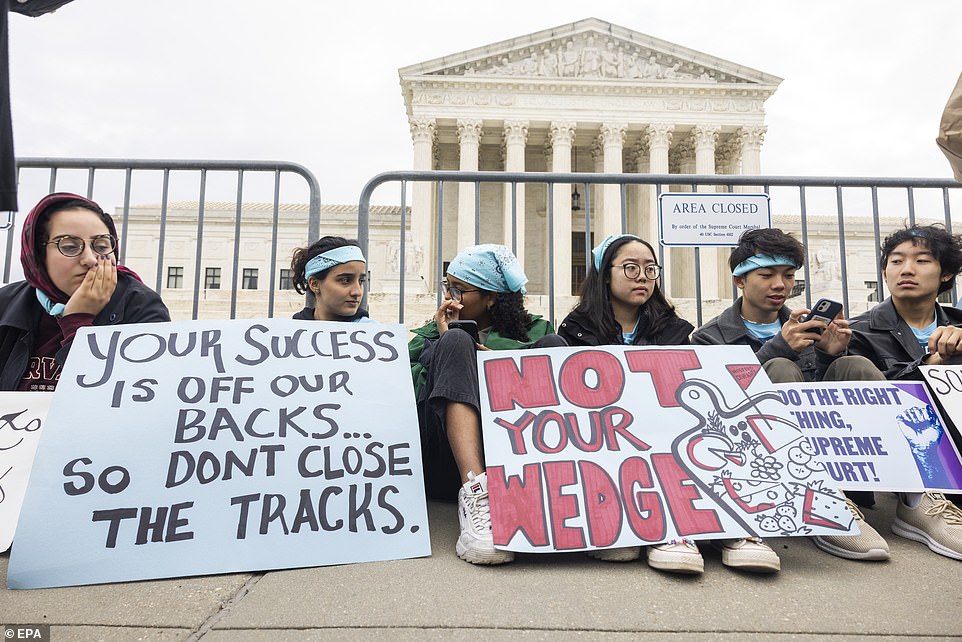 Supporters of affirmative action gathered outside the US Supreme Court as the judges heard arguments about race-conscious college admissions in Washington, DC, this week

The case follows the right-leaning court’s controversial decision in June to overturn Roe v. Wade, triggering state-level laws to curtail access to abortions and protests from pro-choice and women’s groups and others.

Conservative justices, who command a 6-3 majority in the chamber, voiced doubt about allowing race to be considered at all in admissions decisions by colleges and universities and said such policies should not exist forever.

‘If the court overturns protections for affirmative action, that would likely be a decision that Americans would support,’ YouGov said in a statement about its recent polling results.

When asked about the long-contested issue, ‘most Americans say no,’ it added.

In the survey of more than 1,000 US adults, nearly two thirds of white Americans said they were against affirmative action. Black and Hispanic Americans were evenly split three ways between being for, against and unsure. 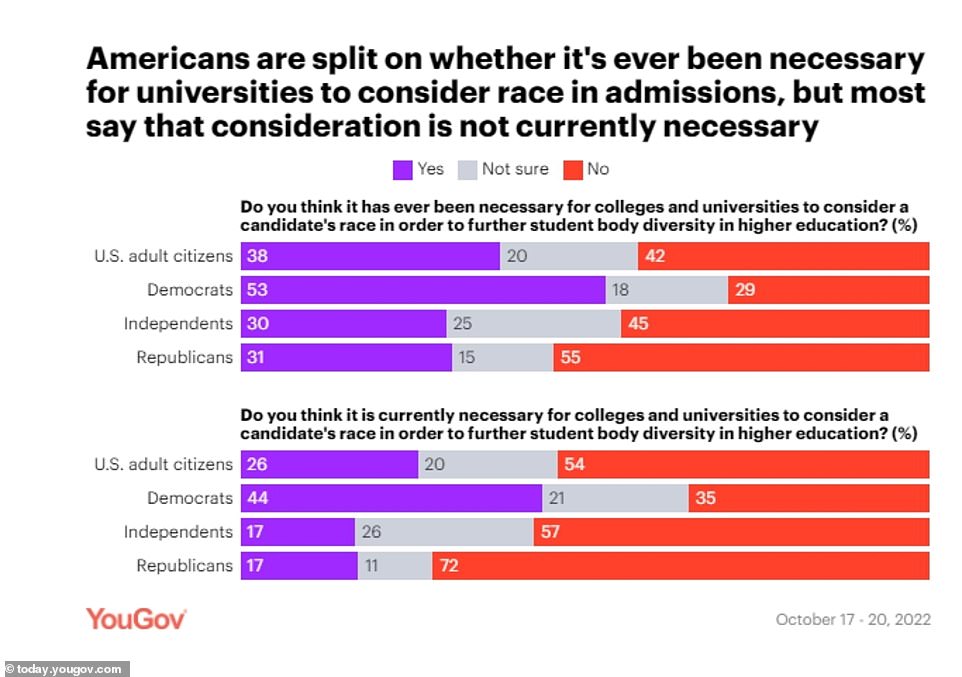 When asked whether the various racial groups had equal opportunities in education, respondents were less clear-cut. Nearly half said the current system was fair, about a third said it was not.

The perennial debate raged on social media on Wednesday, with commentators arguing that race-conscious college selection levelled the playing field for the marginalized, while others slammed it as unfair. 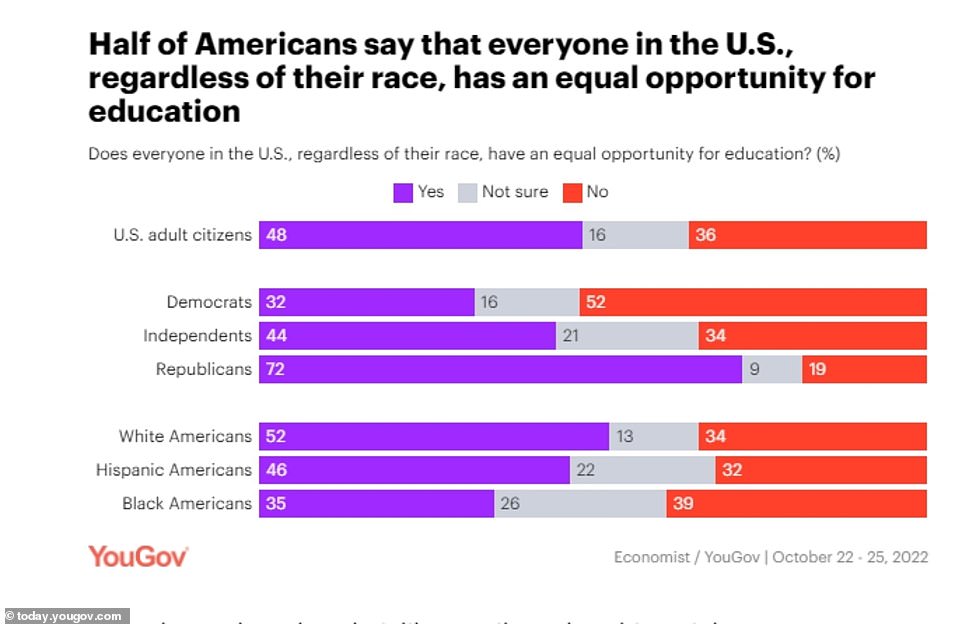 Many schools place a premium on achieving a diverse student population not simply to remedy racial inequity and exclusion in American life, but to bring a range of views onto campuses.

Harvard and UNC say they use race as only one factor in a host of bespoke evaluations for admission without quotas — permissible under court precedents — and that curbing its consideration would cause a significant drop in enrollment of students from under-represented groups.

Rulings are due by the end of June.

In California, the same electorate that gave President Joe Biden a 5-million-vote margin over his predecessor Donald Trump in 2020 handily rejected a proposal to revive affirmative action.

Public opinion on the topic varies depending on how the question is asked. A Gallup Poll from 2021 found 62 percent of Americans in favor of affirmative action programs for racial minorities.

But in a Pew Research Center survey in March, 74 percent of Americans, including majorities of Black and Latino respondents, said race and ethnicity should not factor into college admissions.

US tech giants face new curbs on their power in Europe