Songs from the popular musical Hamilton are often used to soundtrack memes and voice-overs on TikTok. But the musical’s composer, Lin-Manuel Miranda, probably never expected his track The Room Where It Happens would be used in a TikTok video to criticise the governor of the Reserve Bank of Australia, Philip Lowe.

The video is just one of many where young TikTokers either take aim at Lowe and the RBA for hiking interest rates or try to explain why it’s doing so. Comedian and actor Luke McGregor has racked up over 300,000 views for one of his videos where he pleads with Lowe to stop raising rates. 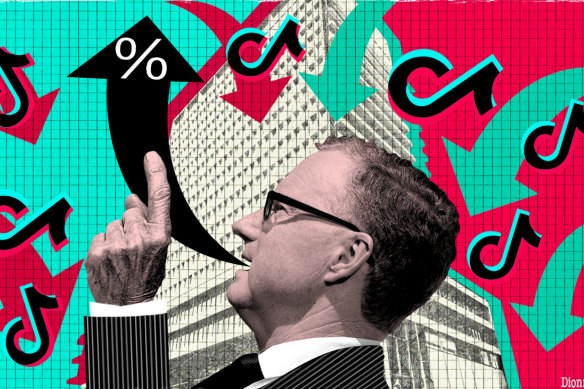 The memes reflect growing anger and confusion among younger Australians about the RBA’s strategy under Lowe. Firstly, there’s the deep frustration about being locked out of a housing market turbocharged by near-zero interest rates. Many have given up hunting after watching prices rocket over the past two years. What good are record-low interest rates if you can’t get into the market?

Next, there is a feeling of betrayal among those who managed to buy a house in the past couple of years, taking Lowe at his word that the RBA wouldn’t lift rates until 2024, only to be stung by the most rapid rises in years.

These are vital issues for millions of Australians, and the RBA has played a role in all of them. Yes, central banks around the world have followed a similar pattern, the war in Ukraine contributed to inflation, and the federal government also has a significant role to play when it comes to house prices and inflation. But the government can be held accountable by the public. Not so of the RBA chief. Until recently, how many Australians could even name Philip Lowe?

Over the previous decade the RBA remained relatively uncontroversial as it oversaw an extraordinary expansion in asset wealth, the result of its decisions to drive interest rates to record lows. The RBA’s formula was pretty straightforward: as house prices increase, Australians feel wealthier and therefore are more willing to spend, increasing demand and stimulating growth and employment.

It became the bedrock principle of the last decade of Australian economic policy. As long as house prices continued to go up, the economy would be fine. And go up they did: doubling over a decade in many capital cities. It all sounds great, as long as you own a home. For those who didn’t and watched this policy in action for the past decade, it was infuriating. And even for those who managed to sneak onto the property ladder at the end of the boom, things are looking pretty grim.

Because interest rates were already so low when COVID-19 struck, the RBA needed another lever to try to boost spending. During the pandemic it deployed something called “forward guidance” – essentially a statement of intent from the bank that it remained committed to low rates. It was great news for those who were keen to get into the market but worried about the possibility of sharp interest rate hikes in the near future. Plenty took Lowe and the RBA at their word and bought up, encouraged by the bank’s explicit focus on keeping house prices rocketing up, only to then be hit with the fastest rate rises in nearly 30 years.

This masthead has reported the experiences of many young families who bought based on the bank’s forward guidance, only to face thousands of dollars more a year in mortgage repayments as rates soared. Interest rates have increased six times in the past six months, as the RBA tries to play catch-up after realising it got the economic forecast wrong.

As a result, many new homeowners, including plenty of people in my social circle, are now in financial stress, or delaying starting families as a result of the pressure. Lowe says he’s now “embarrassed” by the board’s forward guidance, and has initiated a review into it. The federal government has also announced a review into the RBA.

But aside from these reviews there’s been no consequences for Lowe or a board that knowingly created a housing boom which disproportionately benefited wealthier property owners and investors, locked out the rest of us, and now has left plenty of younger Australians in financial strife. Some will be forced to sell their homes, potentially at a loss.

Factoring all of this in, it’s completely understandable that many younger people – including on TikTok – feel both anger and confusion towards Lowe and the RBA. The question is, what happens now? We’ve been told that the RBA board is supposed to operate like some cohort of divine, economic philosopher kings, whose fundamentally anti-democratic operation is all for the greater good.

Given the mess so many Australians are currently in, whether they own a home or don’t, we’re owed much more from Lowe and his board than an admission of “embarrassment”. Private sector leaders would struggle to keep their job in similar circumstances.