Suella Braverman is facing a backlash today over her ‘inflammatory’ warning that Channel migrants are ‘invading’ Britain.

The Home Secretary has come under fire from Tories and opposition parties over the stark language in the Commons yesterday.

Defending her own handling of the crisis amid reports of overcrowding and outbreaks of disease at the Manston processing facility, Ms Braverman said the UK asylum system is ‘broken’ and illegal migration is ‘out of control’.

She suggested only the Tories were ‘serious about stopping the invasion on our southern coast’.

However, immigration minister Robert Jenrick appeared to distance himself from the remarks in a round of interviews this morning.

‘In a job like mine, you have to choose your words very carefully. And I would never demonise people coming to this country in pursuit of a better life. I understand and appreciate our obligation to refugees,’ he told Sky News.

‘The scale of the challenge we’re facing is very, very significant.

‘Fifty thousand people, and the number could well be significantly higher over the course of this year, is a major challenge for this country.

‘It is leading to the infrastructure that we have in terms of reception centres, like Manston, in terms of hotel accommodation, and asylum and social housing, essentially being overwhelmed.

‘Invasion is a way of describing the sheer scale of the challenge.

‘That’s what Suella Braverman was trying to express. She was also speaking, I think, and this is an important point, for those people who live on the south coast, who day in, day out are seeing migrant boats landing on their beaches.’ 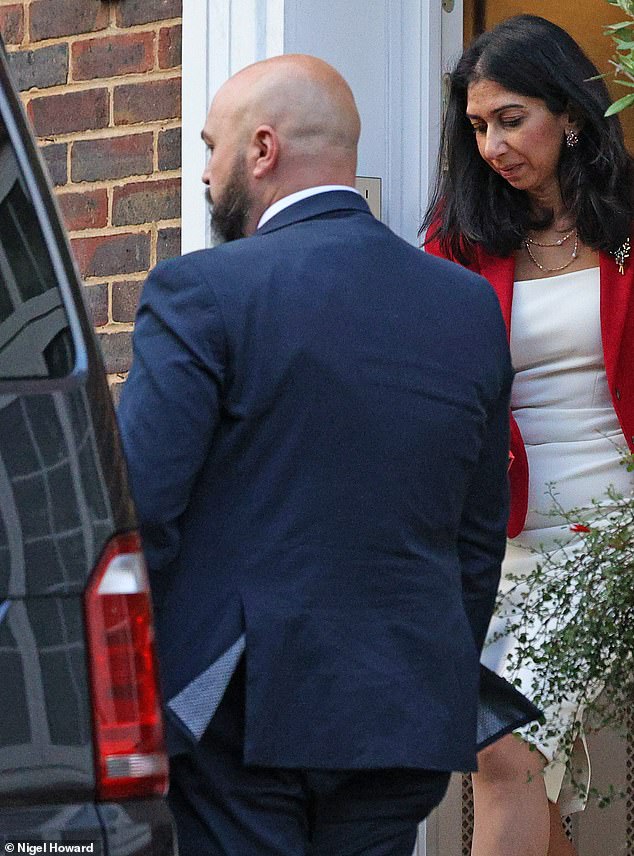 Home Secretary Suella Braverman leaving her home in Hertfordshire today, after coming under fire from Tories and opposition parties over stark language in the Commons yesterday 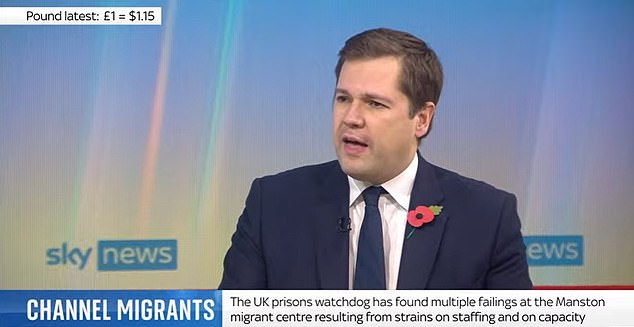 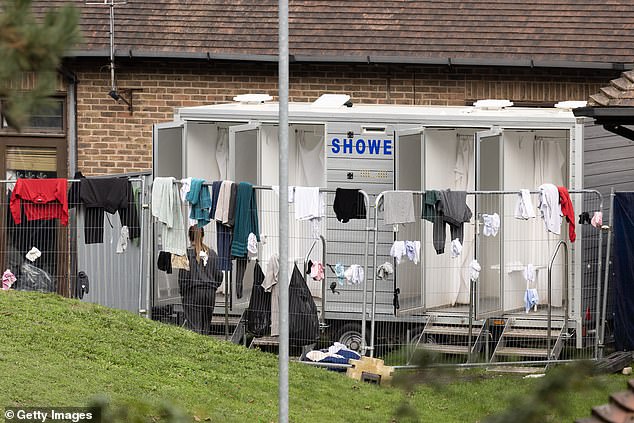 Mrs Braverman has been fighting for survival on two fronts.

As well as the anger about overcrowding at Manston, she is also contending with a continuing controversy over security breaches following her use of a personal email address to send official documents.

Criticism of his rehiring of Mrs Braverman – as well as a focus on her record at the Home Office – has threatened to overshadow his first few days in No10.

But last night Mrs Braverman suggested she was the victim of a ‘political witch-hunt’ as she attempts to survive the double scandal.

More than 4,000 people are claimed to be on the Manston site, which is designed to accommodate only 1,600, with concerns the ‘inhumane’ conditions are leading to a risk of fire, disorder and infection.

Mrs Braverman cautioned MPs against using ‘inflammatory language’ in relation to the severity of the situation at Manston, although she admitted it was ‘indisputably concerning’.

But the Home Secretary attracted condemnation for her own comments when she referred to the Channel migrant crisis as an ‘invasion’.

Furious MPs accused her of ‘inflaming hate’ and highlighted how her remarks came just a day after petrol bombs were thrown at another Home Office facility in Kent.

The embattled Home Secretary gave her wider assessment of the Channel migrant crisis, which has seen 40,000 people arrive on the South Coast already this year.

‘We need to be straight with the public. The system is broken. Illegal migration is out of control,’ Ms Braverman told MPs.

She suggested only the Tories were ‘serious about stopping the invasion on our southern coast’.

‘Some 40,000 people have arrived on the South Coast this year alone,’ the Home Secretary added.

‘Many of them facilitated by criminal gangs, some of them actual members of criminal gangs. So let’s stop pretending that they are all refugees in distress. The whole country knows that is not true.’ 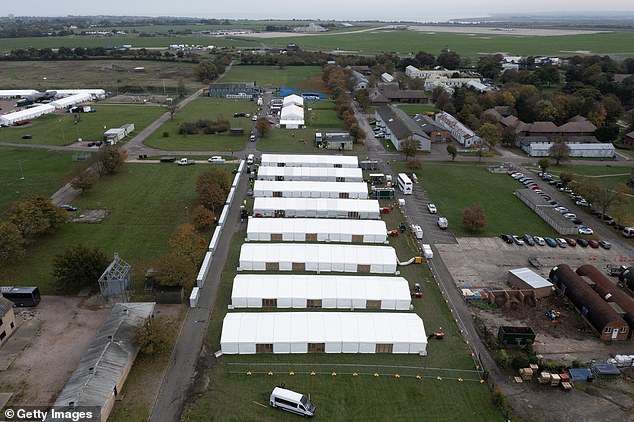 Aerial photos show large tents that have been set up at Manston, a migrant processing centre in Kent that is said to be heavily overcrowded 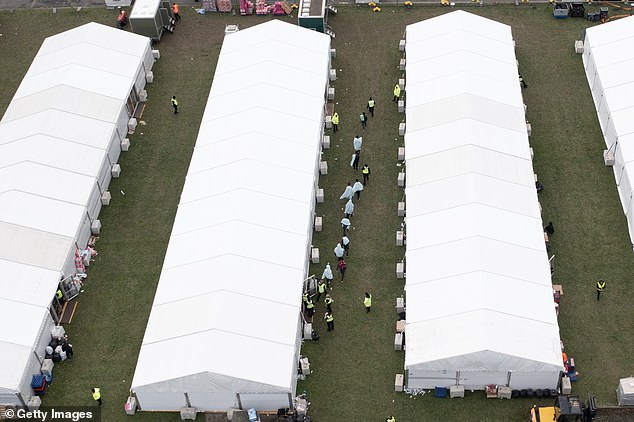 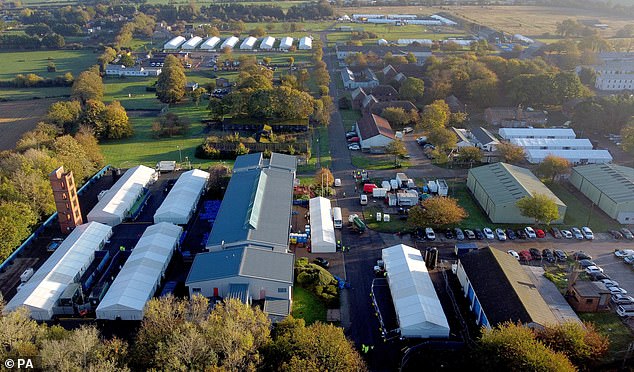 More than 4,000 people are claimed to be on the Manston site, which is designed to accommodate only 1,600, with concerns the ‘inhumane’ conditions are leading to a risk of fire, disorder and infection 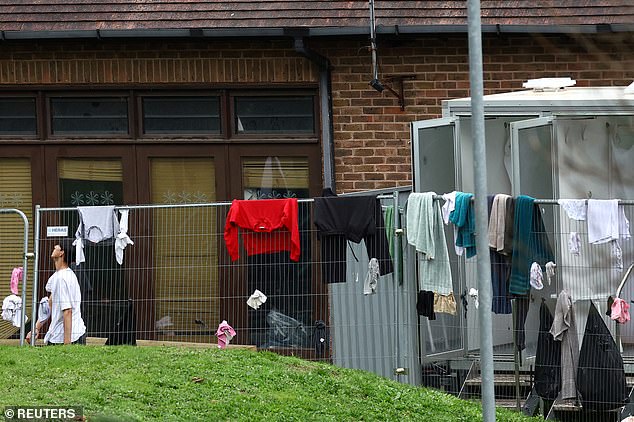 A man walks near a shower area inside the processing centre in Manston, Kent

Mrs Braverman’s reference to an ‘invasion’ on England’s southern coast was swiftly condemned by opposition MPs.

Liberal Democrat MP Alistair Carmichael, the party’s home affairs spokesperson, said: ‘If the asylum system is broken it is because the Conservatives have broken it.

‘This scandal-ridden Home Secretary has no credibility left. These refugees are not an invasion, they are people who want to build a life for themselves and their families, contribute to our society and our economy, and support themselves instead of relying on handouts.’

Veteran Tory MP Roger Gale, whose constituency includes Manston, told The Times: ‘I fear that there is a very great danger with her inflammatory language. People need to use their language carefully because extremists latch on to those words.’

A former Home Office minister said she was alienating her supporters on the right of the party.

‘It just shows what a thug she is,’ they told the newspaper. ‘She’s facile, totally uncompassionate and insincere, hamming it up and that’s the reputation she has now. The ERG is abandoning her, it’s only the dinosaurs left defending her now.’

The Home Secretary has come under pressure over the situation at Manston following reports she failed to act on legal advice that migrants were being detained for unlawfully long periods at the site.

She was also alleged to have blocked the transfer of thousands of migrants to hotels this summer, which was claimed to have directly led to overcrowding and outbreaks of scabies and diptheria.

In her statement to the Commons, Mrs Braverman denied blocking migrants from staying in hotels and insisted she had ‘never ignored legal advice’ in relation to accommodation for asylum seekers.

‘To be clear, like the majority of the British people I am very concerned about hotels but I have never blocked their usage,’ the Home Secretary said.

‘Indeed since I took over 12,000 people have arrived, 9,500 people have been transferred out of Manston or Western Jet Foil, many of them into hotels.

‘And I have never ignored legal advice, as a former attorney general I know the importance of taking legal advice into account.’

Mrs Braverman outlined how it costs taxpayers £6.8million a day to fund hotel accommodation for migrants and asylum seekers.

‘Let me set out to the House the situation that I found when I arrived as Home Secretary in September at the Home Office,’ she said.

‘I was appalled to learn there were over 35,000 migrants staying in hotel accommodation around the country at exorbitant cost to the taxpayer.

‘I instigated an urgent review. I pushed officials to identify accommodation options which would be more cost-effective and delivered swiftly while meeting our legal obligations to migrants.’ 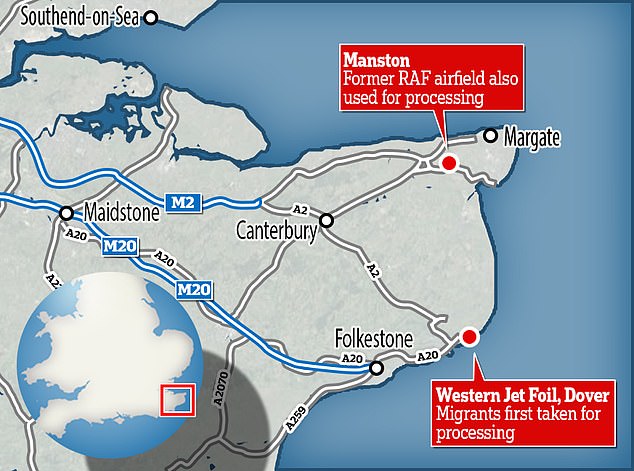 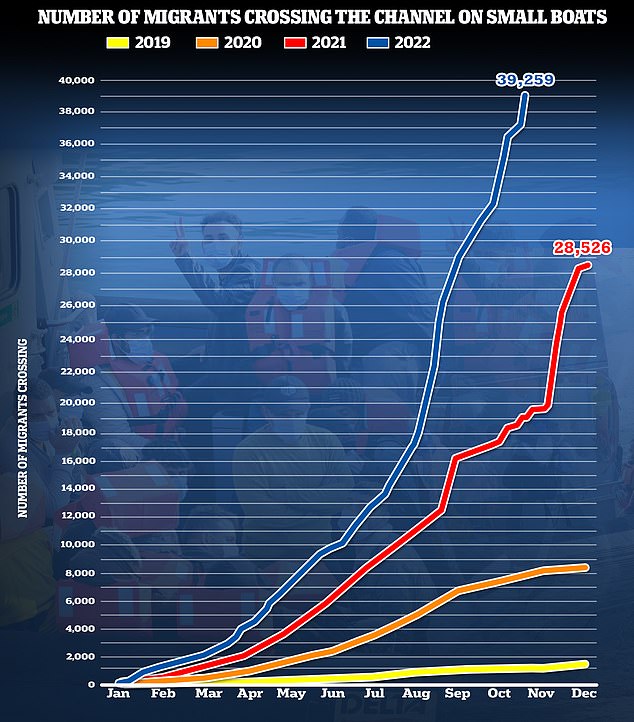 Mrs Braverman faced a grilling from her own Tory benches amid the ‘crisis’ at Manston.

Veteran Conservative backbencher Sir Roger Gale, the MP for North Thanet – the Kent constituency where the Manston site is located, claimed the facility had been operating ‘absolutely magnificently’ and ‘very efficiently’ until five weeks ago.

‘I’m afraid the Home Secretary took the policy decision not to commission further accommodation and it is that, that has led to the crisis at Manston,’ he said.

The Home Secretary replied: ‘On no occasion have I blocked the procurement of hotels or alternative accommodation to ease the pressure on Manston, I’m afraid that simply isn’t true.’

‘We know obviously the suffering that people have experienced there, after 12 years of shameful watch of this Government,’ she added.

In her reply, Mrs Braverman urged MPs not to ‘create alarm unnecessarily’, adding: ‘So when she talks about the language that she uses, I do gently urge her not to use inflammatory language.’

The most DANGEROUS places to live in England and Wales