Dr Noushin Nasiri studies our breath — the good, bad and the ugly. To be precise: tiny changes in our breath and the bodily secrets they reveal. And it has just netted her a $25,000 research fellowship.

“The concentration of trace elements in your breath is relevant to some metabolic changes in your body,” says Nasiri, 36, who grew up in northern Iran and is now at Macquarie University.

Those changes in concentration of gases can indicate more than 30 illnesses such as diabetes. 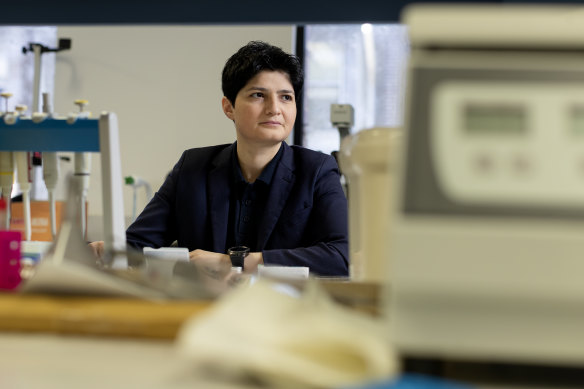 Just as dogs’ sense of smell is so acute they can detect volatile organic compounds in human bodies, leading to early detection of disease, Nasiri, a materials engineer who is head of the NanoTech Laboratory at the School of Engineering, wants to create tiny nanotechnology scanners that will detect those same markers.

“Breath is made of thousands of different chemicals and picking up that change in tiny concentrations is not an easy job to do,” she said.

“They could find a marker for lung cancer, breast cancer, liver failure and even mental diseases such as schizophrenia.

“Currently you need hugely complex and expensive equipment called gas chromatography mass spectrometry in order to detect the change in concentration in breath because it is so tiny.”

Nasiri is one of this year’s recipients of the prestigious $25,000 L’Oreal-UNESCO For Women in Science fellowships. The annual L’Oréal-UNESCO initiative has recognised 64 fellows here and in New Zealand and 3800 fellows globally since it was founded in 1998.

“This was one of my dreams to be honest as an early career researcher,” Nasiri said.

Nasiri grew up on a farm in northern Iran and nature sparked her curiosity. “I was very lucky, I had my father next to me, he had a very curious mind, he used to challenge everyone, so he planted that curiosity in me.

He would question her about the surface tension property of liquids, questioning an eight-year-old on why rain droplets were spherical and not cubes.

”That curiosity became everyday,” said Nasiri, who attended the University of Tehran before arriving in Canberra in 2013 to undertake a PhD.

“I want to emphasise the importance of giving more visibility to women, especially those working in male dominated areas such as engineering. It will change not only my career but also the boundaries. If they see me in that position they will also picture themselves.”

Women graduate from science degrees in large numbers but many later depart the profession. 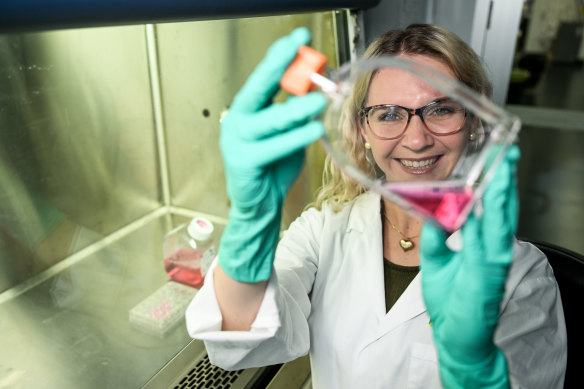 The NHMRC said the framework would address gender disparities by handing greater support to female researchers in early and mid-career stages.

About 33 per cent of researchers are female, UNESCO has reported. In June, the science journal, Nature, reported that female researchers were credited less than their male counterparts. Among graduate students, female researchers had a 14.97 per cent chance of receiving an attribution in research papers, it was higher at 21.47 per cent for men.

When Georgia Atkin-Smith grew up on a hobby farm in Horsham, one of her jobs was to take out the rubbish. Now the La Trobe graduate is a researcher at the Walter and Eliza Hall Institute and investigates phagocytes, the “garbage cells” of the human body.

“In my opinion cell death is probably the most important biological process that our body does,” said the recipient of a $25,000 L’Oreal-UNESCO For Women in Science fellowships. “We need our cells to die.

“I always wanted to get into science,” said Atkin-Smith, whose mother is a science teacher.

“I never knew what it meant to be a scientist. My understanding of what the different options were was very limited because I didn’t have that access.”

Atkin-Smith founded the “Some Blonde Scientist” website and Instagram account for science communication and to support her peers. In 2015 she co-led a team in world first research that captured the death of a human white blood cell on video, which gave new insights into the process and was published in Nature Communications in 2015.

Her research studies what happens after cells die, which they can do at the rate of ten million cells in 10 seconds.

“Just like our garbage trucks on the street that come over and pick up our waste and our rubbish, this is what our body does, with these garbage-truck-like cells called phagocytes.”

Too much cell death causes inflammation and autoimmune disease and neurological disorders such as Alzheimer’s disease. But if cells don’t die that can lead to cancers.

“Our research is typically not the sexy research. I am what you call a basic biologist.

“For all of us who are in the basic biology field it can be challenging to get that recognition from the broader population about how important our research is.

The other winners of the $25,000 fellowship are Dr Hui Fern Koay, from the Peter Doherty Institute, who researches T cell-based therapy, Dr Rebecca Morris, from the University of Melbourne, who is researching rebuilding oyster reefs and Dr Essie Rodgers, University Of Canterbury in New Zealand who is researching how healthy environments affect human health.

Big retailers like Walmart, Macy's see shoppers back in stores

Albert Einstein's sanctuary from the Nazis was a Norfolk LOG CABIN