The women of the Royal Family all showed their grief in different ways as they attended Wednesday’s lying-in-state service for Queen Elizabeth II, a body language expert has said.

On the most sombre day since The Queen’s passing, Kate, the Princess of Wales, appeared silently grief-stricken as she followed the coffin from Buckingham Palace to Westminster Hall by car.

She was joined by Sophie, the Countess of Wessex – who ‘swallowed back tears’ – and Meghan, the Duchess of Sussex, who adopted a ‘pitch-perfect expression’ as they joined their husbands and other Royals for the service in the historic hall.

The Royal Family ‘appeared as choreographed as flying geese for this appearance, walking in a very formal formation,’ according to body language expert Judi James..

The Queen’s coffin was draped with the Royal Standard and adorned with the glittering, priceless Imperial State Crown on a purple velvet cushion and a wreath of white flowers for the procession to the lying in state.

William, the Prince of Wales, and Harry, Duke of Sussex, again set aside their ongoing feud and stood next to each other as they accompanied their beloved grandmother to the Houses of Parliament. 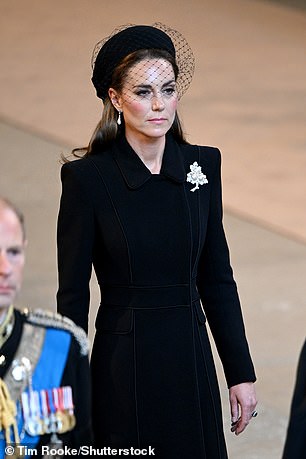 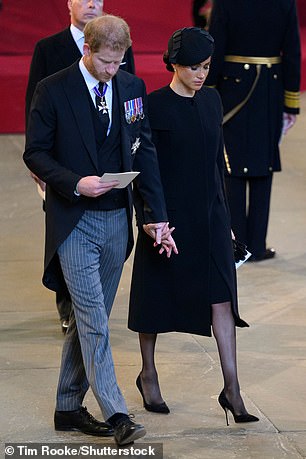 The women of the Royal Family all showed their grief in different ways as they attended Wednesday’s lying-in-state service for Queen Elizabeth II, a body language expert has said. Pictured: Kate, Princess of Wales (left) and Harry and Meghan – Duke and Duchess of Sussex (right) – are seen in Westminster hall of Wednesday

Ms James told the MailOnline that the formality of the occasion was only broken for a brief moment when Prince Harry and his wife Meghan ‘held out their arms to hold hands as they filed out of the service behind William and Kate.’

She said: ‘The gesture looked almost desperately necessary for them and they were the only couple to really acknowledge each other and fall out of formation. We saw how they are currently using this hand clasp as something of an emotional life-line.

‘Meghan was using it to gently rub Harry’s hand with her thumb in a gesture of reassurance at Windsor and the likelihood was that it was used as a mutual support system here today.’

As the procession moved through the country’s capital, Ms James said: ‘There were very large spatial gaps between [the Royals], so no interaction of any kind, meaning they all appeared looking solitary and lost in reflection.

‘Even the wives, who followed in their cars, seemed to be silent, both verbally and non-verbally. Kate sat beside Camilla in a pose of sadness and Sophie sat lost in grief-stricken reflection beside Meghan.

‘When Kate entered the palace hall she did appear to be as silently grief-stricken as Sophie, with some heavy swallowing, pursed lips and narrow-looking eyes suggesting she was close to tears.

‘There were no signs of socializing at all until they lined up to file out in couples.

‘While the other royals sustained their air of silent formality, Harry and Meghan closed the gap between them. ‘Their arm and hand gestures suggested they couldn’t wait to be back in literal touch again and rather than wait until their torsos were touching before they clasped hands they stretched their arms out to return to their signature ritual of closeness and comfort.’

The late sovereign arrived at Westminster Hall 38 minutes later at 3pm – where she was placed on a catafalque – with her crown, orb and sceptre placed on top.

The monarch will lie in state there for five nights until her state funeral at Westminster Abbey on Monday. The procession poignantly passed the statue of the Queen’s parents King George VI and the Queen Mother which overlooks The Mall.

The Imperial State Crown, worn by the Queen on the way back to Buckingham Palace after her Coronation, glittered in the daylight as the crowds held aloft their phones to capture the scenes. 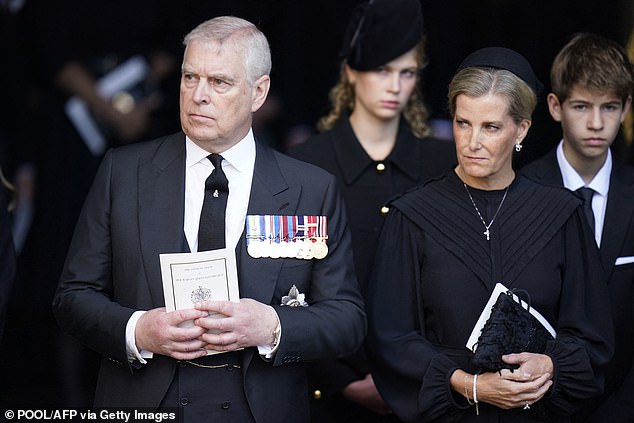 Prince Andrew (left), Duke of York, and Sophie, Countess of Wessex, leave after paying their respects at Westminster Hall, at the Palace of Westminster, where the coffin of Queen Elizabeth II, will Lie in State on a Catafalque, in London on September 14

‘Harry and William had walked side by side behind the coffin this time, rather than with Peter Philips in between them as had been deemed necessary during Philip’s funeral,’ Ms James noted. ‘Both sustained something of a poker face as they walked, especially William, who was in full uniform.

‘Harry’s body language was a little less formal and there was a moment when the coffin was lifted from the carriage that he performed a small shoulder-roll as though wishing he were helping to carry it himself.

‘Inside the palace the wives walked to join their husbands although the formation was formal with large gaps between them.

‘Andrew, standing alone and not in uniform, seemed to use his height to stand rigidly tall as though permanently to attention, with his raised chin and his mouth clamp and frown suggesting a desire to be seen as dutiful.

‘Anne still looked unable to keep her eyes from the coffin, as though watching and guarding her mother to the last moment,’ Ms James said, and noted that Charles betrayed one sign of ‘utter grief’.

‘Charles was seen to perform one micro-gesture of utter grief when his mouth suddenly stretched sideways and his jaw fell open slightly,’ she said. 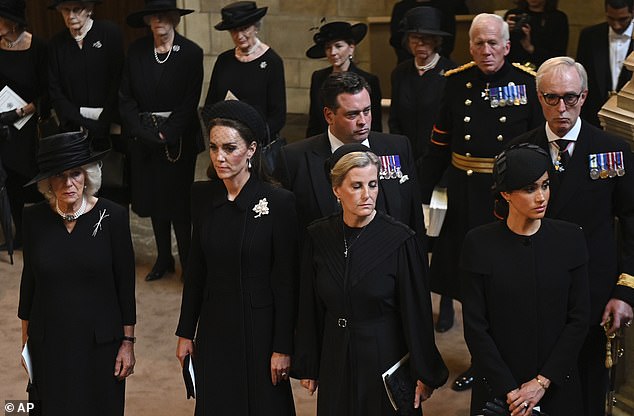 From left, Britain’s Camilla, the Queen Consort, Kate, Princess of Wales, Sophie, Countess of Wessex and Meghan, Duchess of Sussex attend a service for the reception of Queen Elizabeth II’s coffin at Westminster Hall 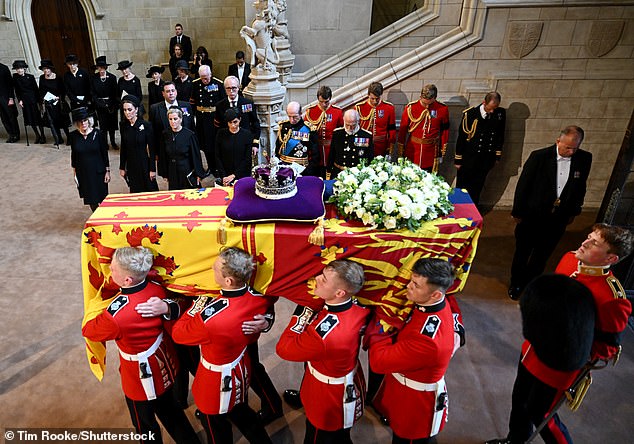 Camilla Queen Consort, Catherine Princess of Wales, Sophie Countess of Wessex and Meghan Duchess of Sussex watch as the coffin of Queen Elizabeth II is brought into Westminster Hall

The crowds stood in a hushed silence as they watched the procession but then broke into spontaneous applause when it passed. Some threw flowers.

‘Sophie arrived in the car with Meghan but Sophie still appears to be too unhappy for conversation or polite chat,’ Ms James said of the Countess of Wessex.

‘She is almost unrecognizable in her grief, and her mouth remained clamped, her head tilted and her eyes gazing in a gesture of reflection.

Meanwhile, this was ‘the first time we have seen Kate properly,’ Ms James said. Kate’s ‘facial features suggested intense grief and a fighting back of tears.

‘Her eyes looked narrowed as though she had been crying, and her lips were pursed in a gesture of self-control. Some deep swallowing suggested the tears might have been close, though.

Meanwhile, Meghan was able to stroke the ‘perfect expression’ for the occasion.

‘Meghan adopted the rather pitch-perfect expression of someone registering sadness and empathy for the family,’ according to Ms James.

‘She kept her head up and a polite but caring-looking part smile on her face, while her brows were asymmetrically steepled to register that empathy for the sadness around her.’