London: British police say evidence revealed “an extreme right-wing motivation” behind an attack last week at an immigration centre on the English coast, describing it as “a terrorist incident”.

A 66-year-old man threw at least two gasoline bombs at the walls of a migrant centre on October 30 near the port town of Dover, a point of arrival for many who attempt the perilous journey to Britain across the English Channel in small boats. The assailant was later found dead. Authorities identified him as Andrew Leak. 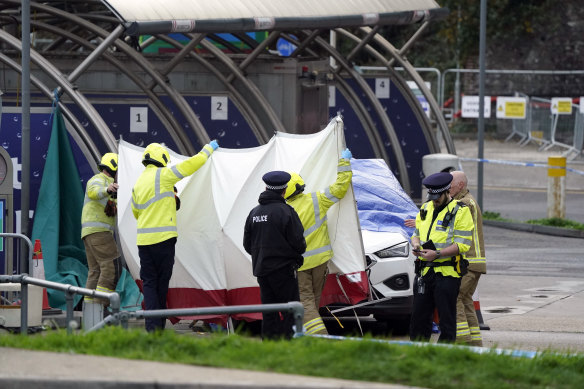 Emergency services investigate a car allegedly involved in the bomb attack on the migrant processing centre in Dover, last week.Credit:AP

British counterterrorism police said they found evidence indicating the man who arrived alone in a car and hurled “a number of crude incendiary devices” outside was “motivated by a terrorist ideology”. While the agency said the probe continues, it added there were no signs he had accomplices.

The police statement said investigators spoke to witnesses and recovered items including digital devices. “Examining these items suggests there was an extreme right wing motivation behind the attack,” it said, without elaborating further on the evidence.

Two people suffered minor injuries and around 700 migrants had to be relocated to Manston in south-east England, where another migrant centre came under fresh scrutiny this week.

A girl’s call for help, tossed from the overcrowded centre at Manston, became the latest flash point in the heated debate over Britain’s immigration policies. “Please help us,” the letter read. 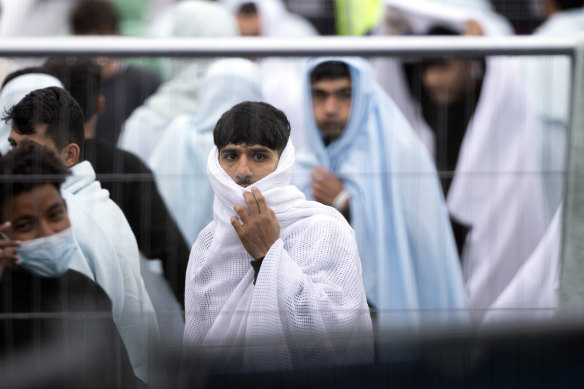 Migrant men wrapped in a blankets are kept behind barriers at the Manston airfield migrant processing centre.Credit:Getty Images

The British government has sought to curb arrivals and smugglers bringing people seeking refuge via shipping containers or flimsy rafts across the English Channel from France, a route that has proved deadly at times. But officials have faced criticism for policies including an attempt to deport people to Rwanda to press their asylum claims.

Since the 2016 Brexit vote to leave the European Union, Britons’ concerns about the economy have pushed immigration down the list of pressing issues facing the country. But this year, the number of people detained crossing the channel has surged, and the handling of channel crossings has fuelled post-Brexit friction between France and Britain.

In the recent attack near Dover, a police official had said the suspect was “likely to be driven by some form of hate-filled grievance”.

British advocacy group Hope Not Hate said it had saved now-deleted social media posts in which the assailant espoused violent, anti-immigrant sentiments such as writing that he hoped to “obliterate them Muslim children”.

“Whilst there are strong indications that mental health was likely a factor, I am satisfied that the suspect’s actions were primarily driven by an extremist ideology,” Tim Jacques, senior national coordinator for Counter Terrorism Policing, said on Saturday.

In July, British intelligence chief Ken McCallum said that investigations involving people with racist, neo-Nazi or related ideological motives represent about 20 per cent of the terrorism caseload, adding that many of them are young individuals.

Girl, 6, died of sepsis after medics made 'catalogue of errors'