The first thing that hits you when you step into Southbank’s unusual new playground is that the bluestone pavers are, in fact, squishy rubber mats.

While this aspect might be immediately reassuring, the $2.4 million play space on Southbank Boulevard has opened to mixed feedback from locals, with some voicing concerns about safety. 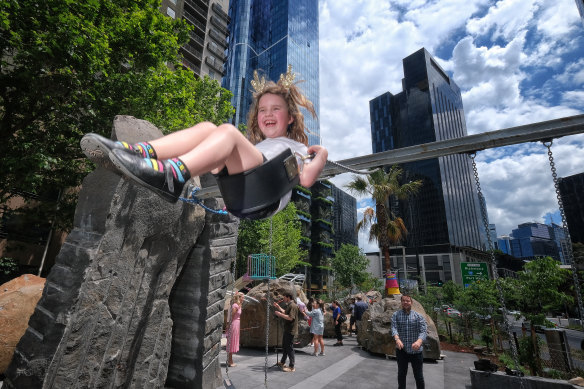 Six-year-old Pearl says the park ‘kind of looks like it’s all going to fall apart, but it’s not’.Credit:Luis Enrique Ascui

Melbourne City Council commissioned award-winning installation artist Mike Hewson to design the playground – his first in Melbourne after creating three in Sydney, one of which has been mired in similar controversy.

The Southbank site, which took nine months to construct, is decked out with huge bluestone boulders perched on mover dollies that look like they might slip away at any moment.

The pavers may be fake, but the boulders are the real thing, sourced from a Port Fairy quarry that also supplies the city’s footpaths. A construction crew spent hours grinding off sharp edges.

A slide appears to precariously teeter on bricks, while some metal ladders appear only tied in place with rope. 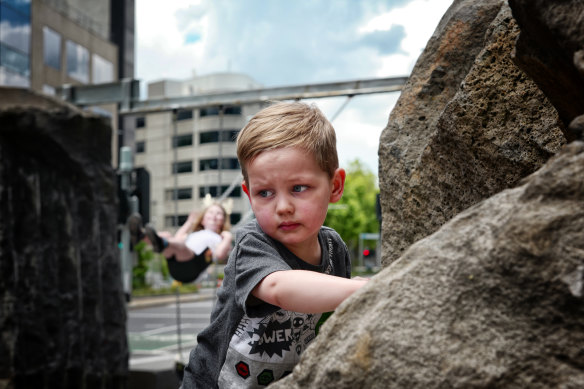 Three-year-old Ryder takes on a boulder at the new Southbank playground.Credit:Luis Enrique Ascui

Melbourne Lord Mayor Sally Capp said the playground had been carefully designed with safety in mind. The dollies, for example, were welded into the ground with steel rods.

But Southbank mum Michelle Buza, who took three-year-old son Ryder to test out the playground, was apprehensive.

“We were really looking forward to this … but we weren’t aware it was going to be an adventure park,” Buza said.

“Why can’t we just have a normal park with trampolines?”

Five other wacky playgrounds in Melbourne

Buza worried about potential injuries on the boulders and found herself running around trying to keep an eye on her son because a line-of-sight was difficult around rocks, and the site borders three roads.

“How practical is it for us? I was excited for a park where I could sit with the other mums … but we’re just going to be ignoring each other.”

Still, for all her concerns, Buza was quick to acknowledge Ryder loved the park.

“He’s having the time of his life,” she said.

Six-year-old Pearl was similarly pleased. “I like that it kind of looks like it’s all going to fall apart, but it’s not,” she said.

On Monday, ABC Radio host Virginia Trioli caused a stir on social media after she declared: “It looks like the most incomplete and dangerous playground I could possibly imagine.”

Capp shrugged off the criticism and said the park was designed for “risk play” to support children’s resilience and cognitive abilities.

“We want our kids to be adventurous,” she said. “We want people to think there’s an element of danger, albeit that it’s completely safe. 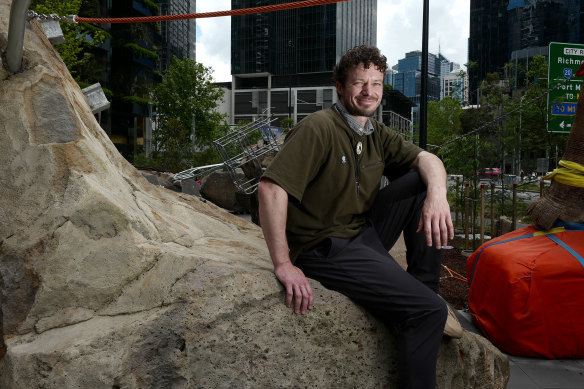 “There are some rough surfaces – though not sharp surfaces – and things stick out in weird places. Each element of this park has been really thought through. There’s nothing like it.”

Hewson, a trained structural engineer, was confident in the playground’s safety.

“Bold propositions like this attract a lot of critiques, so you have to be additionally well considered,” Hewson said.

He encouraged parents to allow their children to test out the space. 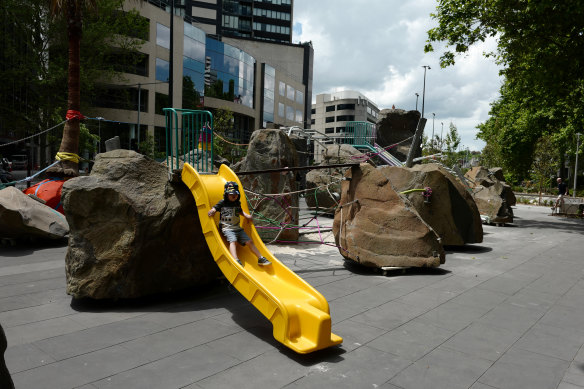 The new Southbank playground has lots of features, but some parents have expressed safety concerns.Credit:Luis Enrique Ascui

“What I’ve found with these parks is that it’s the children who interpret what it is to the parents … Kids are little risk assessors.”

Hewson felt buoyed by the feedback from families on the weekend, when he said the playground was swarming with children and parents appeared comfortable.

He said there were many details to explore: boulders fixed with different parts for clambering, and an industrial feel with building waste recycled into play material.

The space also appeals to children’s sense of discovery, with gemstones, toy animals and plants hidden in nooks.

“It’s more like a Disney set where you come in not knowing exactly what to do,” Hewson said.

Capp said the playground was part of a $44 million revamp of Southbank Boulevard to open more space to the municipality’s most densely populated neighbourhood.

While some in the community were concerned about safety, Penna felt the site was broadly accepted.

Penna said he was a fan of the “edgy, bold” design as it suited the feel of Southbank as an arts precinct.

“We can’t put an everyday boring park there, we need to be creative,” he said.

Coronavirus pandemic could prove 'fatal for people with eating disorders'