Grandfather of the nation: How Britons will be encouraged to view 73-year-old King as a kind, compassionate and wise monarch who will ensure a seamless transition from his mother’s reign, writes REBECCA ENGLISH

He has taken on many roles during his long apprenticeship for the crown – royal action man, environmental warrior and, according to some, meddler-in-chief.

But now the UK and Commonwealth will be encouraged to view King Charles as the ‘grandfather of the nation’, whose kindness, compassion and wisdom will ensure a seamless transition from his late mother to her son.

It is an image which the new monarch and his team have been determined to project from the moment he left Balmoral on Thursday as he was forced to put his profound personal grief to one side in order to lead his dazed country in mourning.

King Charles, 73, knows he will never be able to replicate his mother’s role or unique position in British national life – nor does he want to – but he has inherited many of her most admirable qualities. 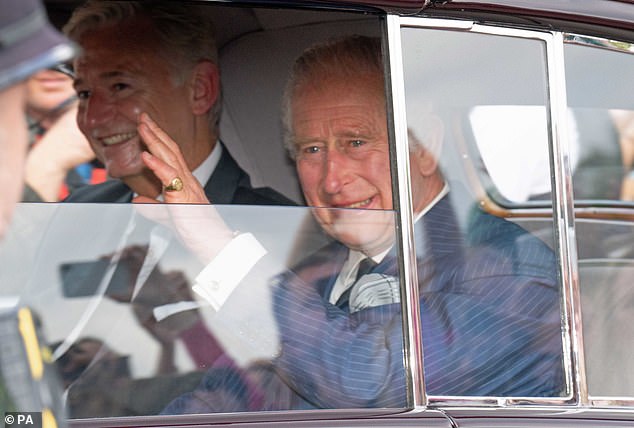 A friend says: ‘Whilst he is not in the first flush of youth, that is not a bad thing for this country. His Majesty brings 50 years of experience on the world stage with him and will be able to adopt a grandfatherly presence in the nation’s life. It may make it easier to bear losing the nation’s grandmother.

‘Yes, you knew him before. But I think there’s been a clear and immediate change in the way people look at him and the way he is presenting himself to the world.

‘He is making very clear he is about continuity and wants to dedicate himself to the service of the country, respecting its constitutional guidelines.

‘I think people are already responding to that. When the sun came out and the crowds applauded and cheered him at Buckingham Palace on Friday, it was an incredibly moving moment for those of us who have known him for many years. He was touched beyond belief.’

The friend adds: ‘His address to the nation that night was majestic and heartfelt, every word written with his own hand.

‘He was telling us that he understood what his mother meant to us all and that he would continue to do her proud.’

Experienced PR professional Patrick Harrison was Charles’s Press Secretary for more than a decade and played a key role in working on the royal’s reputation and introducing ‘Mrs PB’ [Parker Bowles] – Camilla – to the world. 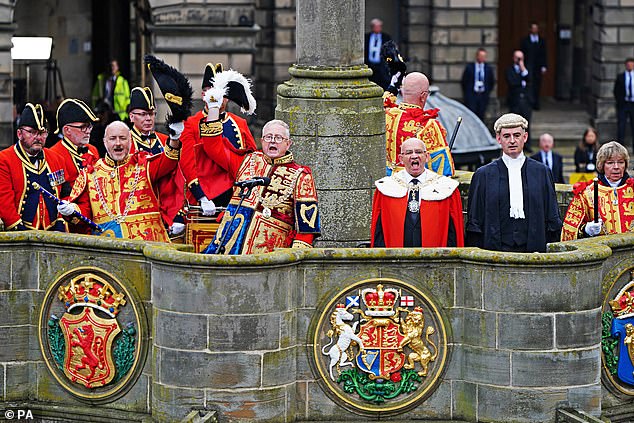 The Lord Lyon King of Arms, Joseph Morrow (R) attends the proclamation of the new King, King Charles III, from the Mercat Cross outside of St Giles’ Cathedral in Edinburgh 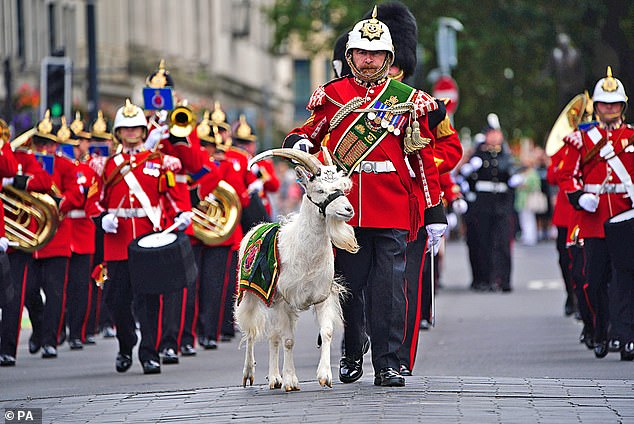 The marching band of the 3rd Battalion Royal Welsh, and their billy goat mascot, march to Cardiff Castle ahead of the ceremony of the proclamation

Few people have had such a ringside seat on history and he says the man we have seen in recent days is the same passionate, driven individual he knew, but one with an instinctive sense of what he needs to now bring to the table.

He tells me: ‘The King’s sense of duty is exactly the same as her late Majesty’s. He has given 50 years of public service and is the most dedicated and committed individual I’ve ever worked for.

‘He’s also one of the most hard-working. If you were flying back after a long trip and watching a film, he would be the only person still working through his papers. He is incredibly dedicated and hard-working and committed to public duty. Everything he has ever done is to try and make things better for other people. That is who he is and that isn’t going to change.

‘But what we did see while Prince of Wales is that he had particular passions. And he more than anyone knows he cannot have that level of involvement now.

‘I think what we are seeing already is that passion now channelled into compassion. The passionate prince will become the compassionate king.

‘The role of the monarch is to be the nation’s unifier and the embodiment of compassion. He has that in abundance.’

The fact that Charles has already, in such a short space of time, such goodwill from the nation doesn’t come as a surprise to those who have known him for years. They believe the King has been unfairly caught in a PR time-warp, fuelled by ‘unhelpful’ aide-memoirs such as Netflix drama The Crown. 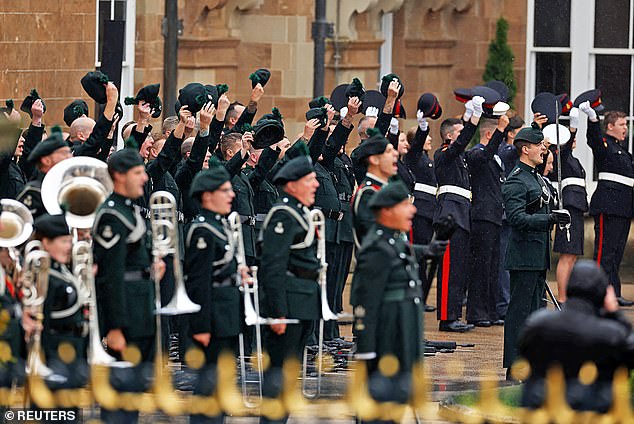 Three cheers for the King rings out after the reading of the Accession Proclamation at Hillsborough Castle, south of Belfast 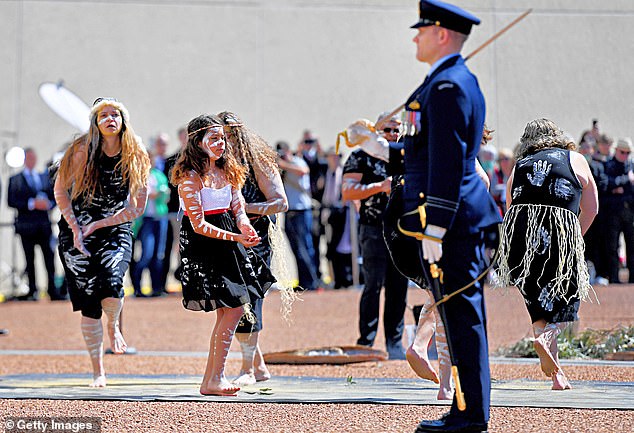 Members of the Yukembruk dance group perform during the proclamation ceremony at Parliament House in Canberra, Australia

Shortly after I took over my job as The Daily Mail’s Royal Correspondent more than 15 years ago, I was asked to tea by a senior aide who told me as we sat beside a roaring log fire: ‘He’s a man who has made mistakes, but should he be forced to pay for them for the rest of his life?’ Another senior royal insider who has worked closely with the King agrees, arguing: ‘All these things the outside world is now observing – the connection with the public, the emotion of the man, the fact that he will respect constitutional red lines – he has been saying and doing this for years.

‘The only difference is that so many people stopped actually looking at what was in front of them somewhere in the mid-1990s when his marriage broke down and he was characterised in a certain way. Many people made their mind up about him then – this po-faced, cold, uncaring prince.

‘And no one bothered to look at him again until Friday.

‘He is working incredibly hard to get his first days and weeks off to a good start. It’s a careful balancing act between wanting to show he is ready and demonstrate that the continuity people are hoping for is in evidence, but at the same time he is wrestling with the loss of his mother after 73 years. And that is an incredible emotional tightrope. Actually, I think the work will be keeping him going. It will give him something to focus on apart from the loss of his mother.’

Over the years, Charles has suffered from the curse of the opinion poll, regularly struggling to reach double figures when compared with younger, more glamorous members of the Royal Family or the unshakable popularity of his mother. Some believe it is a shame that it has taken until now to get into his stride, but others think he has saved the best for last. 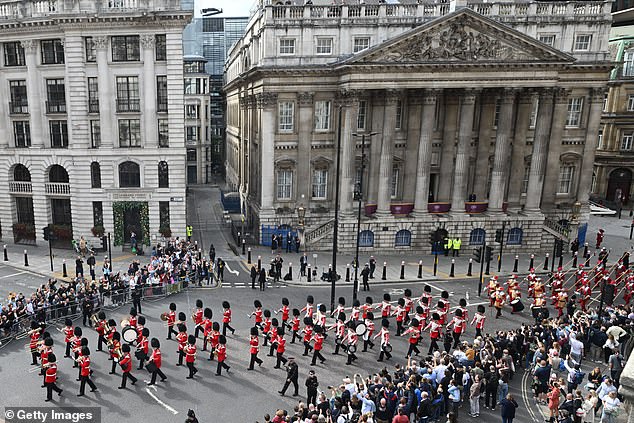 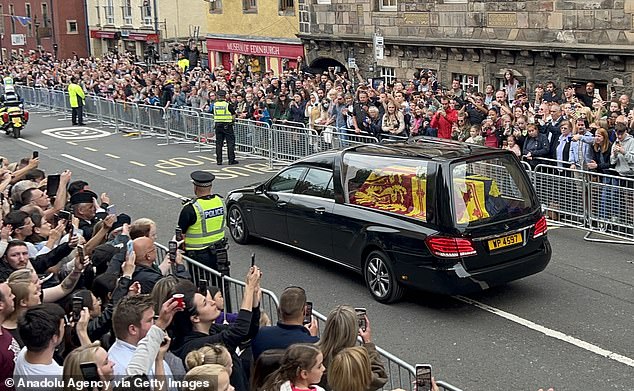 One former royal aide says: ‘In many ways the idea of being a prince has a connotation of youth about it and that became increasing discordant as the prince got older. The minute he stepped into the role of King it was an opportunity for him to represent himself as this senior figure – the grandfather of the nation.

‘And he immediately fits that role well. He looks the right age, he’s got the gravitas, the tone of voice and, crucially, he’s got the experience. People talk a lot about the Queen’s first Prime Minister being Winston Churchill but Charles is someone who also met Winston Churchill as a young man and every single Prime Minister that followed. He’s reassuring, he brings continuity, and he looks the part.

‘He is a 73-year-old man, he’s got grey hair, he’s got a rich, mellifluous voice. So for the King it’s now about connecting with people and reassuring them that there is someone at the top of this country and the realms that you can literally lean on.

‘I think what is surprising people is the depth of emotion – the emotional range – which you are already seeing in him.’

That is nothing new to people who have worked with the King for years. One tells me about a visit to a children’s hospice when a patient the then prince had planned to meet tragically died hours before he was due to arrive.

Many advisers were in favour of calling the visit off. Charles went ahead with it, taking the child’s grieving parents into a chapel and spending 20 minutes comforting them. Not a word was revealed to the media. 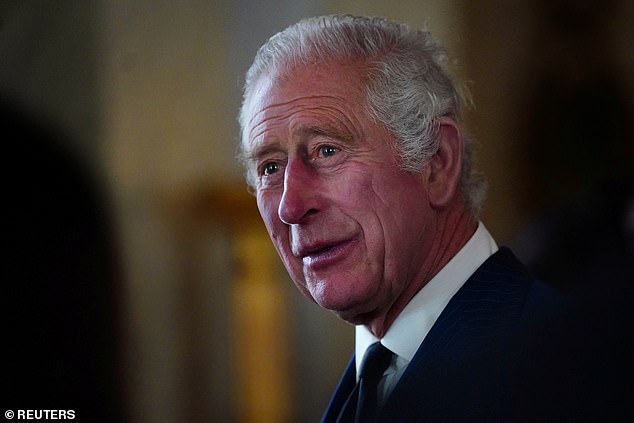 Aids have described the new King as a ‘very young 73’ saying: ‘This is a man who is extremely fit, whose work rate leaves most of his household trailing in his wake’ 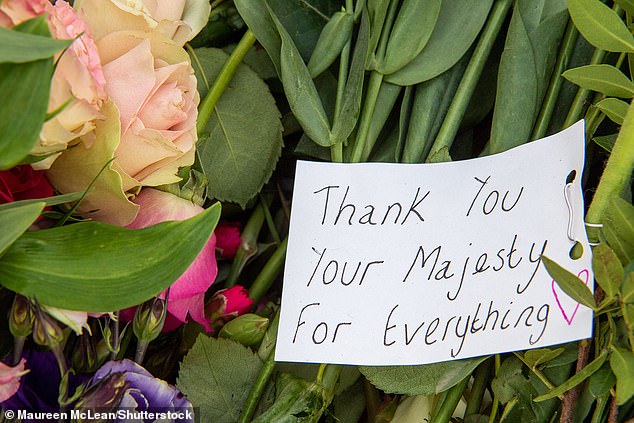 One source says: ‘That’s something that people don’t always see about him. Yes, they see his “big sweep” stuff, such as the environment, but they don’t know about the hours he spends each week writing to people who are going through loss and a tough time, meeting them and talking to them.

‘He’s long been underrated for that. After incidents such as flood disasters in Cumbria, the Selby rail disaster – he insisted on going – and meeting with injured soldiers coming back from overseas, it’s always been there as part of his make-up and we see it in his sons as well.’ The same source admits it makes them ‘baulk’ when royal commentators refer to Charles’s long wait for the ‘top job’.

The insider says: ‘The prince I worked for wasn’t waiting. He was getting on with it. He had 100 things he wanted to do and deliver. He would always say “There have been 21 Princes of Wales and they all created their own different job description”.

‘Destiny was always waiting – of course it was. But the idea of him waiting around for the top job was completely inaccurate.’

It’s a lot to ask at 73 though, surely? I ask another former aide. They argue: ‘Except he is a very young 73. This is a man who is extremely fit, whose work rate leaves most of his household trailing in his wake.

‘Most staff find it exhausting working for him because he never bloody stops. He has a prodigious work rate that would be significant for somebody in their 40s, let alone in their 70s. And crucially he is interested in what he is doing. That can’t be under-estimated. He is fascinated by everyone and everything. It’s the fuel for driving him forwards. He has so much fire and passion in him.’

The same insider believes we should view our new monarch’s long period of learning his craft as a positive not a negative.

They say: ‘He should not be categorised as an old king. He has been a moderniser the whole of his life and I think he will continue to be a moderniser in his own way.

‘I think he has got the energy of a man half his age and he has got the drive to continue to bring attention to the things that matter to him and the country.

‘Put it this way, he works seven days week and the concept of a weekend doesn’t really exist. He just does it in a different place!’