Two Victorian men who transported almost $4.5 million in ill-gotten cash for a crime syndicate linked to China got a heftier jail sentence to deter money laundering in Australia.

Zheng Li, 33, and Xiaoli Zhuang, 37, will serve an extra two years in jail on their original sentence after it was found to be “manifestly inadequate”. 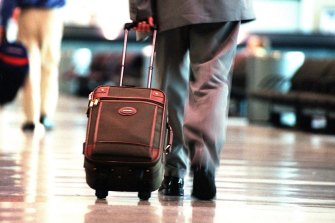 Unlawful money was transported between Perth and Melbourne, often by air.Credit:Phil Carrick

The pair had travelled between Melbourne and Perth via air and road on four trips over the course of a month before being arrested in Western Australia in a national sting operation on August 22, 2017.

One of the men’s handlers, Xixuan Huang, made their travel arrangements and passed on the money to Xiao Tang, who offset the cash by means of a series of online banking transactions in Yuan to various Chinese bank accounts.

Huang and Tang admitted to being unregistered remittance dealers under Victoria’s Anti‑Money Laundering and Counter‑Terrorism Financing Act and were fined $12,000 and $14,000, respectively, by a Victorian court.

Li and Zhuang went to trial in WA in February last year, arguing the money was lawful but they were acting as brokers to circumvent Chinese law – which prevented unapproved transfers of more than $US50,000 – on behalf of their Chinese clients, who also wanted to have money available in Australia.

The jury did not convict them of the harsher crime of money laundering but convicted them on two counts of possessing $1.47 million suspected of being unlawfully obtained and two counts of dealing in $3.03 million that was the proceeds of an offence.

District Court Judge Alan Troy said the convictions were “utterly inevitable” since what the pair testified was, at times, “complete nonsense” and he was satisfied beyond reasonable doubt that each one believed the money was the profits of criminal enterprises in Australia and their role was to assist in moving the money to Victoria.

As the leader, Li was originally sentenced to seven years jail and Zhuang, as Li’s recruit, to five years, which meant they could be released in 2023 and 2025 with parole.

In a recent WA Court of Appeal decision, senior state prosecutor Amanda Forrester SC successfully argued the sentence was “unreasonable or plainly unjust” when measured against the 20-year penalty carried for the more serious convictions.

And when viewed in its entirety, the penalty “did not bear a proper relationship to the overall criminality involved”.

At sentencing, the prosecutor submitted it was a “reasonably sophisticated operation in which Mr Zhuang and Mr Li were engaged, as illustrated by the use of tokens, the involvement of an international controller and the interstate transportation of money”.

Their original trial heard the money was handed over by strangers, with a $5 note used as an identification “token” on some occasions.

“The syndicate was structured so as to provide anonymity to those higher in the chain of command and to distance the origin of the cash from its intended destination,” court documents said.

Li’s Victorian Queens Counsel, Paul Holdenson, argued against overturning the sentencing, saying there was “no proper basis for inferring error”.

“‘Two powerful sentencing objectives’ were in Mr Li’s favour, namely his good prospects of rehabilitation and ‘the absence of any real requirement for specific deterrence’,” Mr Holdenson submitted to the appeals court.

“Further, the sentencing objectives of denunciation and community protection played no role.”

Zhuang’s legal aid lawyer, Sarah King, agreed, saying her client had no prior criminal history and “there was no evidence to suggest that he was at risk of reoffending”.

In a similar but smaller case, two Chinese-Malay cousins, aged in their 20s, were caught transporting $1.5 million in unlawful funds in Sydney and were sentenced to five years nine months and four years six months’ jail in 2018.

WA Court of Appeal President Michael Buss, justices Robert Mazza and John Vaughan agreed to re-sentence the Victorian pair on the grounds that greater weight should have been given to general deterrence.

“The laundering of the profits of criminal enterprises is an essential aspect in the achievement of the objectives of organised crime, especially the objectives of those at or towards the top of the criminal hierarchy,” they said.

“Neither Mr Li nor Mr Zhuang was youthful or inexperienced for sentencing purposes.”

They considerably upped the sentences for the two more serious counts to run concurrently, which resulted in nine years serving time for Li and seven years for Zhuang. Both were granted parole.