The Great British RIP-OFF: Cost of baking a Victoria sponge cake rises 20% in one year to £13.50 as food prices soar to 14-year high

British home bakers have seen the cost of cake ingredients increase by more than a fifth over the past 12 months.

According to figures released by the Office of National Statistics, basic ingredients such as butter, flour and jam have increased by almost 30 per cent.

Other basic food stuffs have also increased dramatically in price, with a 20 per cent increase in the price of eggs and a 40 per cent rise in low fat milk.

Research by website eToro revealed the cost of ingredients to make a Victoria sponge cake has risen from £11.19 last year to £13.50 this year, The Telegraph reports.

The Consumer Price Index (CPI) rose by 9.9 per cent in the 12 months to August, slightly down from the 10.1 per cent increase in July.

According to the CPI, the fall in the price of motor fuel made the largest ‘downward contribution’ to annual inflation rates between July and August.

However, the statistics agency warned: ‘Rising food prices made the largest, partially offsetting, upward contribution to the change in the rates.’

According to supermarket comparison site Trolley.co.uk, the cost of ingredients to making a Victoria sponge cake have increased by more than 20 per cent in the past 12 months.

Across all food types, prices rose by 13.1 per cent in the 12 months to August, the highest rate for exactly 14 years. 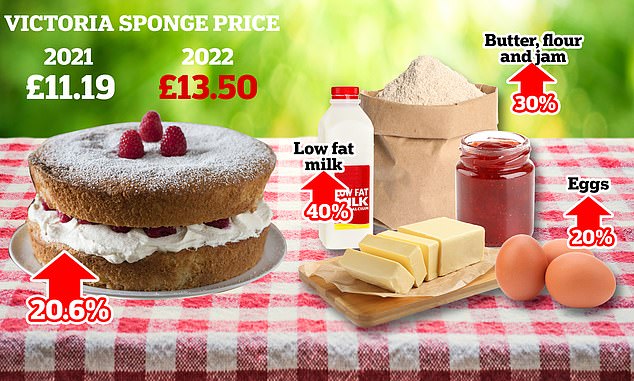 According to supermarket comparison Trolley.co.uk, the cost of ingredients to making a Victoria sponge cake have increased by more than 20 per cent in the past 12 months 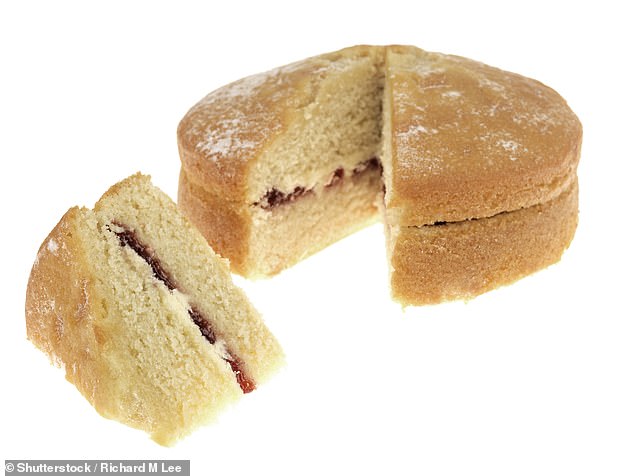 And while it eased slightly last month, UK inflation is still the highest among all G7 countries.

Such is the situation caused by the ongoing price hikes, four out of five low-paid workers say the cost-of-living crisis is the worst financial period they have ever faced.

More than half of 2,000 workers surveyed by the Living Wage Foundation said they have used a food bank over the past year, with many paying more visits in recent months.

The foundation said almost half of low-paid workers now regularly skip meals and nearly a third are unable to heat their homes due to financial reasons.

Research has shown that almost a quarter of all workers have had to take out a payday loan to cover essentials, said the report.

Living Wage Foundation director Katherine Chapman said: ‘Everyone is feeling the pressure from soaring inflation, but our polling shows that low-paid workers are being hit harder than most, with well over half using food banks in the last 12 months.

‘These shocking findings bring to life what it’s like to be paid less than a Real Living Wage during a cost-of-living-crisis. It’s more important than ever that those employers who can, step up and provide a wage based on the cost of living, joining over 11,000 Living Wage employers across the UK.’

The Living Wage Foundation will next week announce new rates for the voluntary Real Living Wage, which is higher than the statutory minimum.

The current rates set by the foundation are £11.05 an hour in London and £9.90 outside the capital, compared with the statutory adult rate of £9.50.

Inflation figures are unlikely to have peaked yet either, rises are expected again later this year. In October energy bills will spike from £1,971 to £2,500 for the average household.

The Government’s support for households will help somewhat, taking bills down from £3,549.

The National Institute of Economic and Social Research forecast that inflation will peak at around 11.5 per cent in the first quarter of next year, and come back down to around 2 per cent towards the end of 2024. 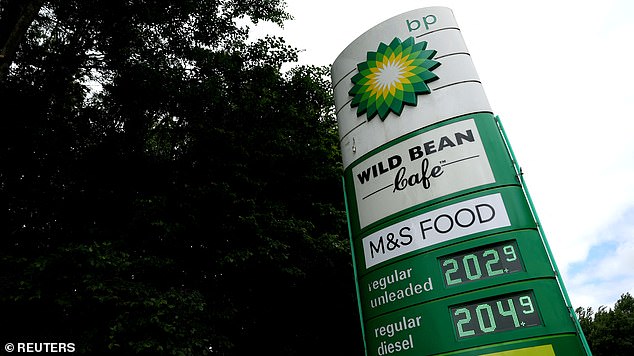 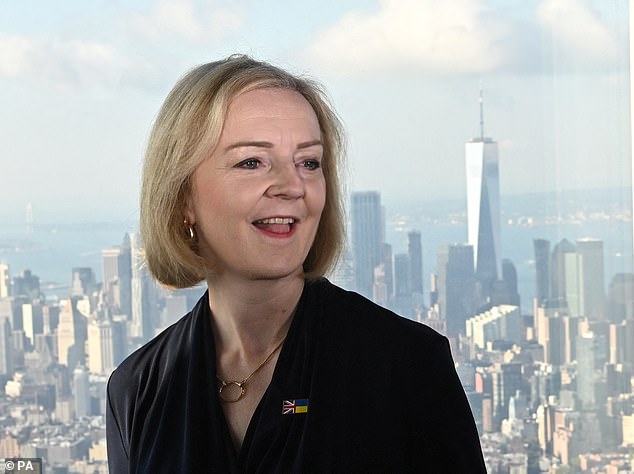 George Lagarias, chief economist at accountancy Mazars, warned that it will be some time before inflation truly starts dropping off.

‘Higher energy prices for all the previous months have fully fed into most supply chains and it will take months of lower oil for end-consumer prices to meaningfully come down again. Inflation may well remain a central theme until at least the end of the year,’ he said.

‘However, input costs have begun to drop and we should see this feeding into general prices eventually.’

The figures mark a positive trend for the first time in more than a year. Inflation has risen every month since September 2021, according to the official figures.

But despite a positive headline trend, inside the data there are more worrying details, according to analysis from the Resolution Foundation.

The think tank said the poorest 10th of households are facing an average inflation rate of 10.6 per cent, compared with 9 per cent for the richest.

‘High inflation is set to be with us for some time, particularly for low-income households who continue to be hit hardest by high prices,’ said senior economist Jack Leslie.

‘Having delivered £2,200 worth of cost-of-living support for every household this year, the Government will need to consider what support will be needed next year too.’

Inflation has piled pressure on households around the country, whose cost of living has rocketed, largely as a result of soaring energy costs.

No part of the economy has escaped the energy crisis, which has helped push up prices of food and other items.

Experts believe that the support on energy bills announced by the Government last week will ensure that inflation does not reach the concerning highs that had been forecast.

According to one prediction, CPI inflation could have peaked above 20 per cent as energy bills continued to rise.

But bills will be capped at £2,500 per year for the average household for the next two years after new Prime Minister Liz Truss was forced to intervene.

Without that support bills had at most been forecast to rise to £7,700 for the average family.

Yael Selfin, chief economist at consultancy KPMG UK, said: ‘The new measures announced by the Government to cap energy prices for households at £2,500 could see inflation peak at a more modest 10.5 per cent in October.

‘However, with inflation in near double digits, the combination of expected tax cuts and support measures for households may prompt the Bank of England to take a more hawkish stance to avoid higher inflation further down the line.

‘This may result in steeper rate rises and higher rates to counteract the inflationary impacts of the expected fiscal largesse.’

Meanwhile, businesses are calling for more details about the help they will be given with energy bills.

The Government promised that businesses will receive ‘equivalent support’ to households, but did not say how.

Who is Rishi Sunak and when did he become UK chancellor?

FCC 'applauds' Elon Musk for his $44B Twitter deal