China’a Covid-19 death toll is mounting after authorities dramatically lifted some of the strict nation-wide zero-Covid measures earlier this week.

It is unclear how many people are dying from the virus, but social media posts, business closures, and other anecdotal evidence suggest huge numbers of infections across the country.

The government has also not officially reported a death from Covid-19 since earlier this month on December 4. 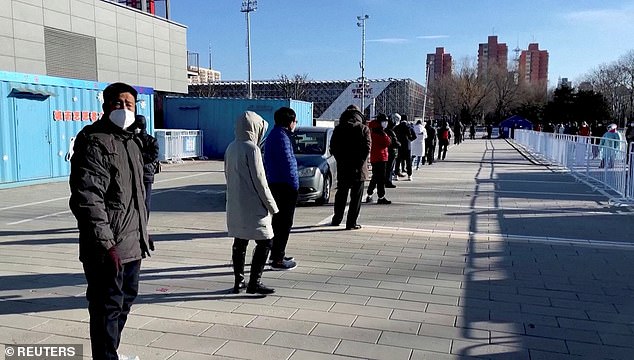 It is unclear how many people are dying from the virus, but social media posts, business closures, and other anecdotal evidence suggest huge numbers of infections across the country. Pictured: Beijing residents are pictured queuing for a booster vaccine, December 17 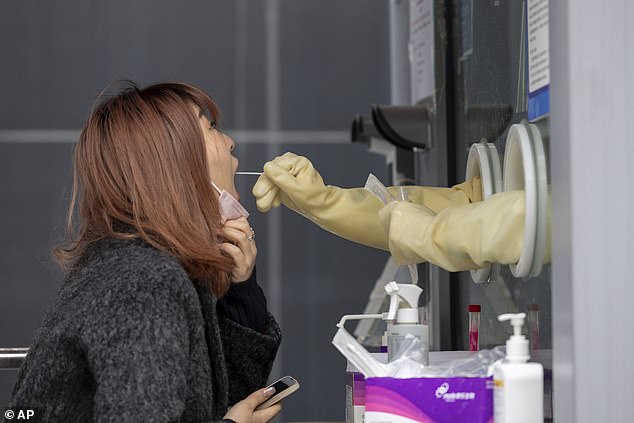 A woman gets swabbed for Covid-19 test at a booth in Shanghai, December 16

Without the government reporting official statistics, it’s unclear how many people are dying from the virus.

Contributing to the anecdotal evidence that suggests the surge in deaths, an AP reporter who visited the Dongjiao Funeral home in eastern Beijing was told by relatives that at least two people cremated there had died after testing positive.

Health authorities had designated Dongjiao and one other funeral home to cremate those who die after testing positive, according to a relative of one of the dead. The woman said her elderly relative had fallen ill in early December, tested positive, and died Friday morning in an emergency ward.

She said there were lots of people in the emergency ward who had tested positive for Covid-19, adding that there weren’t enough nurses to take care of them. The woman did not want to be identified for fear of retribution.

Over about an hour, an AP reporter saw about a dozen bodies wheeled from the Dongjiao funeral home.

About a half-dozen people inside described how another victim had struggled to breathe that morning before dying, and the death certificate listed ‘pneumonia’ as the cause of death, even after a positive test for Covid-19, one of those people said. The people interviewed did not want to be identified for fear of retribution. 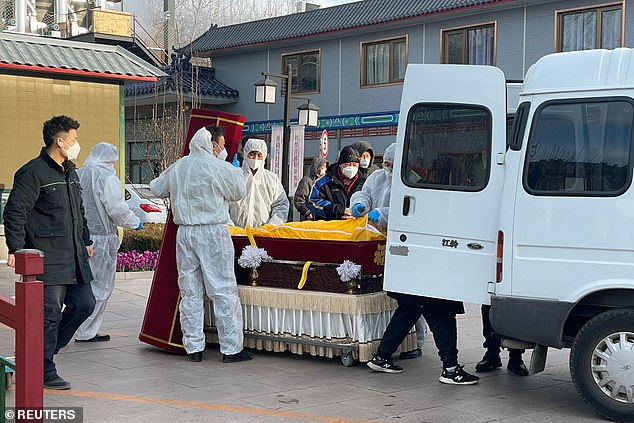 Workers in protective suits transfer a body in a casket at a funeral home, amid the surging outbreak of Covid-19, December 17 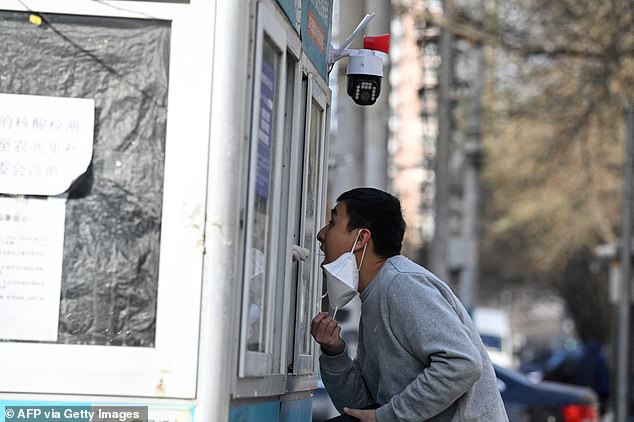 A health worker gets a swab sample from a man to be tested for Covid-19 coronavirus, December 17

Three employees of shops in the complex that houses the funeral home said there had been a marked increase in the number of people going there in recent days. One estimated about 150 bodies were being cremated daily, up from what is normally a few dozen a day.

One employee attributed it to the coronavirus, although another said there are usually more deaths with the arrival of winter. The employees did not want to be identified for fear of retribution.

The official death toll reported by the Chinese government is low, with just 5,235 deaths – compared with 1.1 million in the United States. However, public health experts caution that such statistics can’t be directly compared.

Chinese health authorities count only those who died directly from Covid-19, excluding those whose underlying conditions were worsened by the virus. In many other countries, guidelines stipulate that any death where the coronavirus is a factor or contributor is counted as a Covid-19-related death.

Healthcare experts say that China’s officials have sought to minimize the death toll figures by doing this.

To prevent an even greater surge in Covid-19 cases in areas with limited medical resources, China’s Cabinet ordered on Friday that rural areas prepare for the return of migrant workers over the coming weeks.

Returnees must wear masks and avoid contact with elderly people, and village committees must monitor their movements, the guidelines said, but didn’t mention the possibility of isolation or quarantines.

There are fears of an even greater surge in cases around China’s winter holidays, when tens of millions take to trains, buses and planes for what may be their only trip home all year. 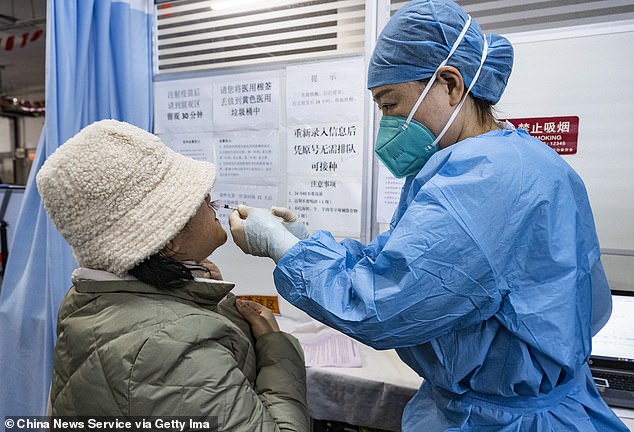 The Chinese government have not officially reported a death from Covid-19 since earlier this month on December 4. Pictured: A Beijing resident takes a nasal spray Covid-19 vaccination, December 16

The upcoming Lunar New Year falls on January 22, but migrants generally begin heading home two weeks or more in advance. Some Chinese universities say they will allow students to finish the semester from home to help spread out the travel rush and reduce the potential for a bigger outbreak.

Medical resources in smaller cities and rural communities, which are home to about 500 million of China’s 1.4 billion people, lag far behind those of large cities such as Beijing and Shanghai. Rural medical infrastructure includes 17,000 county-level hospitals – many of which lack even a single ICU bed – 35,000 township health centers and 599,000 village clinics.

China has been pushing to increase the number of fever clinics in rural areas to treat those with Covid-19 symptoms. Currently, about 19,400 such clinics or consulting rooms operate in communities and townships around the country, state media reported Friday.

By March 2023, about 90% of health centers at the township level will have fever clinics, Nie Chunlei, head of primary health at the National Health Commission, said Thursday.

‘This will effectively enhance the capability of primary-level health care institutions to receive patients with fever,’ said Nie, who also urged stockpiling of medicines and antigen test kits, many of which have become scarce even in big cities. 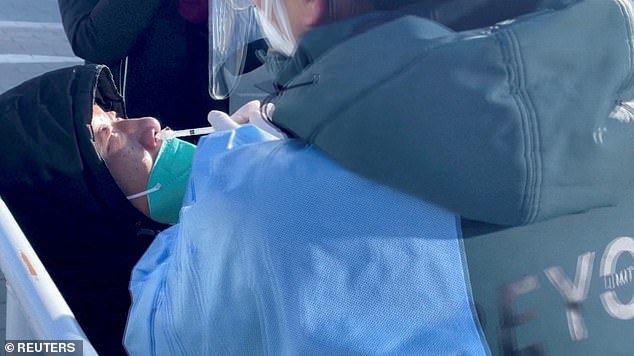 There are fears of an even greater surge in cases around China’s winter holidays, when tens of millions take to trains, buses and planes for what may be their only trip home all year. Pictured: a Beijing resident receives a nasal spray Covid-19 booster vaccine, December 17

The lifting of some travel regulations has spurred both relief and anxiety over the level of Covid-19 preparedness.

Health experts have said China will face a peak of infections in the next month or two and is trying to persuade reluctant seniors and others at risk to get vaccinated.

The changes follow growing frustration with the ‘zero-Covid’ policy blamed for hindering the economy and creating massive social stress. The easing began in November, and accelerated after Beijing and several other cities saw protests over the restrictions that grew into calls for President Xi Jinping and the Communist Party to step down – a level of public dissent not seen in decades.

Under the relaxed rules, obligatory testing is no longer required and people with mild symptoms are permitted to recover at home rather than go to a quarantine center. Meanwhile, the semi-autonomous gambling enclave of Macao will scrap its mandatory hotel quarantine for arrivals from Hong Kong, Taiwan and overseas starting Saturday, the government said.

However, travelers must spend five days in home isolation and undergo testing, and are barred from entering mainland China until the 10th day upon arrival. Both Macao and Hong Kong have scrapped most anti-Covid-19 measures.

Boy, 11, and girl, 12, found stabbed as woman arrested on suspicion of attempted murder in Peterborough – The Sun